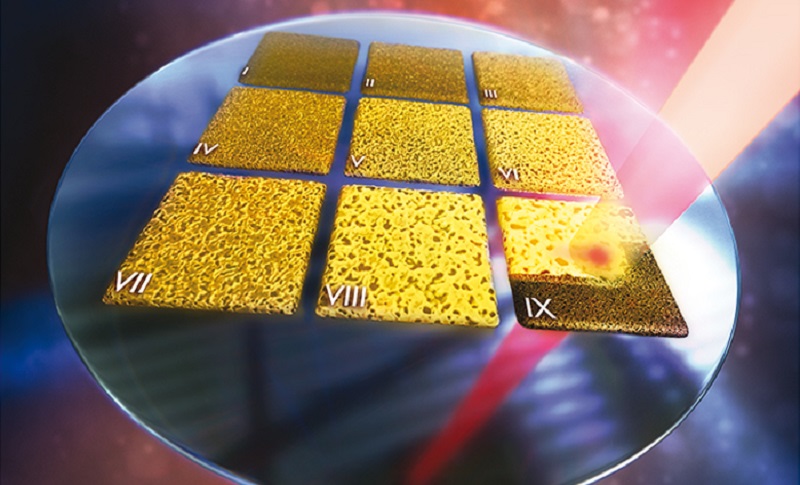 While DARPA is working on implantable human-computer neural interfaces, another project shows that all that is gold might be glittering nano-architecture.

Researchers at Lawrence Livermore National Laboratory (LLNL) have packed a library of nanoporous gold onto a single chip. The nanoporous gold (np-Au) structures can be used to beef up high-capacity lithium ion batteries or increase the throughput of morphology interaction studies, which are used for things such as experiments on neural interfaces.

Co-principal investigators Erkin Seker, a professor at the University of California, Davis, Monika Biener of LLNL’s Materials Science division, and their team at LLNL created the library using a careful application of tunable laser energy.

“Traditional heat application techniques for the modification of np-Au are bulk processes that cannot be used to generate a library of different pore sizes on a single chip,” said Ibo Matthews, a LLNL staff scientist and co-author of the paper. “Laser microprocessing offers an attractive solution to this problem by providing a means to apply energy with high spatial and temporal resolution.”

In laser microprocessing, also called micromachining, energy can be imposed near the surface of the material while its distance and duration is very carefully controlled. The researchers used simulations to study the best method of applying heat to very small areas of np-Au.

The on-chip material library they produced has 81 different np-Au samples of nine different morphologies. That means that a groundwork has been laid for future work on laser-based annealing on porous, thin film materials. High-capacity lithium ion batteries, cell-material interaction studies such as those needed for neural interfaces, analytical biosensors, and nanoscale material science studies could benefit, said Biener.

The report was published on the Jan. 14 issue of Nanoscale.