Building energy infrastructure that keeps wildlife safe is a key concern at the U.S. Department of Energy, which is why we have funded six teams to improve technologies that will protect eagles sharing airspace with wind turbines. More than $3 million has been allocated across the six teams for groundbreaking, critical eagle-impact minimization technology research, development, and demonstration projects.

The research supported by this funding will provide wind plant owner-operators with viable and cost-effective tools for reducing potential impacts to eagles at wind farms. This important research builds on the Energy Department’s work to enable wind power deployment and ensure coexistence with wildlife by addressing siting and environmental issues. If successful, the research will protect wildlife while also providing the wind industry with new tools to minimize regulatory and financial risks. 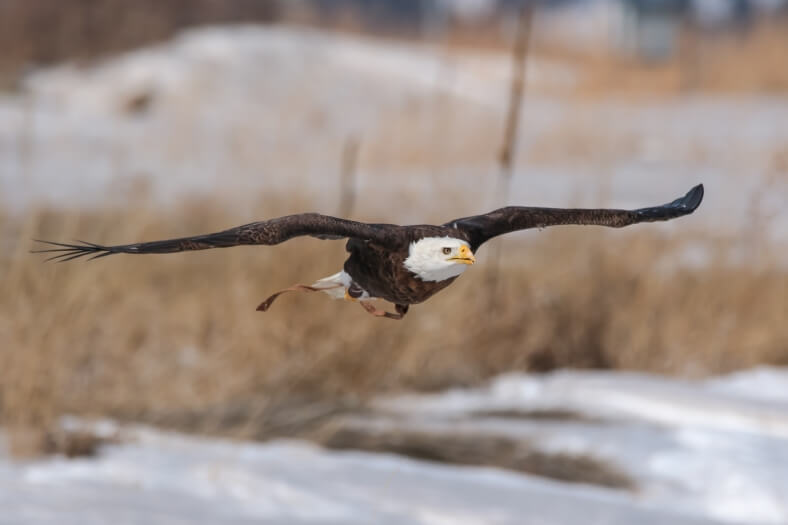 Our selected teams will focus their research on one of three goals that were developed by the Energy Department:

Purdue University will characterize the specifics of how golden eagles see and hear; Purdue researchers will then provide this information to technology developers, so they can build signaling systems specifically tuned to golden eagle eyes and ears. The goal is to collect data for future systems that could make it easier for golden eagles to detect and avoid wind turbines.

Laufer Wind Group, LLC, will develop and demonstrate an automated system to minimize eagle impacts consisting of off-the-shelf radars, pan-tilt-zoom cameras, and a central computer interfaced with a wind facility control system. Laufer Wind Group intends for their system to detect, track, and reliably identify eagles from far away, providing time to shut down wind turbines when eagles are approaching, thereby greatly reducing the risk of injury.

American Wind Wildlife Institute, in partnership with Renewable Energy Systems (RES), will evaluate a camera-based eagle detection system called IdentiFlight, developed by RES in collaboration with Boulder Imaging. The project will also independently evaluate how IdentiFlight compares with humans in identifying eagles and reducing collision risk under a variety of environmental conditions.

The American Wind Wildlife Institute, in partnership with Liquen Consultoria Ambiental, will also evaluate the effectiveness of a camera-based detection and auditory deterrent technology called DTBird, developed by Liquen Consultoria Ambiental. Researchers will assess how well DTBird cameras detect eagles, how strongly eagles respond to the sounds emitted by the system, and calculate how much the DTBird technology reduces the overall risk to eagles.