Blade pitch adjustment is one of the most critical functions of wind turbine operation. Pitch bearings allow wind turbine blades to optimize their angle according to wind speed, or create a stall condition in high winds, so the reliability of these bearings is critical to efficient, safe operation. By using a vertical turn/grind machine from Swedish builder KMT Lidköping, the giant bearings in a wind turbine’s adjustment mechanism can be manufactured with accuracy typically reserved for small parts.

The machine combines motion systems with Renishaw optical and magnetic linear and angle encoders on critical axes to achieve form deviation of less than 1 µm on parts 4000 mm in diameter. “This is hard turning and grinding, and is very demanding,” said Eive Johansson, KMT Lidköping’s Chief Designer. “Positioning accuracy is very important, with a direct effect on the quality of the finished bearings.”

Prior to the VTG4000, the company’s largest machine could accommodate parts up to 600 mm (24 in.) diameter, but the VTG4000 handles diameters in excess of 4000 mm (157 in.), the size of the largest wind turbine bearings, while providing much greater accuracy. 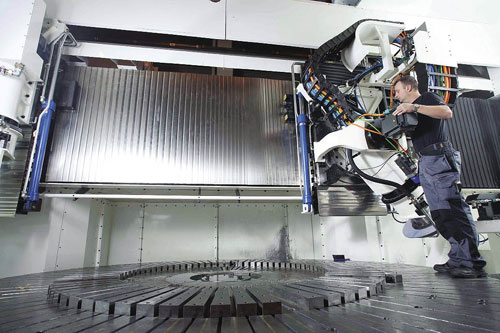 Linear slides are at the heart of Lidköping machines, and the combination of hydrostatic guideways, air seals and linear motors creates a stiff, accurate, maintenance-free system. “To achieve dynamic stiffness we need high gain, which is linked to the quality of the encoder scales,” explained Johansson. “It also makes a big difference that the angle encoders have the scale integrated directly onto the ring.”

The multi-tasking CNC machines these large bearings in a single set up, performing both turning and grinding with two separate heads. The two heads are configured as required, usually grinding/turning or grinding/grinding. The machine’s 4.5 m X-axis carries the two heads on opposite sides of the part, and allows both grinding and turning tools to access the outside of the part. With some components weighing more than 35 tons, the machine is resistant to distortion and thermal variation, which is aided by closely controlled hydrostatic oil and coolant temperatures. “We’ve used hydrostatic guideways since the 1970’s, and combining them with linear motors gives us a faster, more accurate machine capable of far greater acceleration and deceleration,” said plant manager Henrik Jonsson. “When you see that you can move the 25,000 kg rotary axis with your finger, you realize how good the hydrostatic system is.” 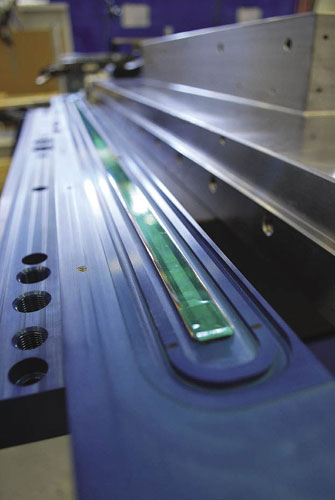 Renishaw SiGNUM™
linear optical encoder scale in place on a linear axis of the VTG4000.

Said Johansson, “It was important that the linear encoders have a continuous length of at least 4.5 m, as well as high dirt resistance, and SiGNUM fit these requirements the best. We have fitted them to all four linear slides, and have had no problems. Our rotary table has the same design principle, with hydrostatic radial and axial bearings, air seals and torque motors. We did the same analysis and chose the SiGNUM angle encoders.”

Renishaw’s LM10 magnetic angle encoders are fitted to the B-axes of the grinding heads. These encoders are exposed to the harsh conditions of the machine environment, but their non-contact, non-optical design, and sealing to IP68, protects them from the effects of coolant and swarf. The digital or analog output encoders allow up to 100 m travel and high-speed operation of up to 25 m/s (4 m/s at 1 µm resolution).

To accurately set the part in the machine’s work-coordinate system, the machine uses a Renishaw RMP60 radio signal transmission touch probe. After a raw part is placed on the bed, the probe is loaded into the tool changer and used to locate the exact position of key features in a matter of seconds. These data are used to update the coordinate system in-cycle for quick, accurate machining.