With TSN’s intelligence in the network, a system can become more automated and less dependent on human intervention and subsequent error.

The Industrial Internet of Things (IIoT) represents massive opportunity for the factory automation and industrial markets. IIoT growth is increasing the amount of data harvested through distributed networks, requiring new methods for managing and transferring critical and non-critical information and mechanisms for streamlined operational and manufacturing models.

Key stakeholders and decision-makers increasingly look for new ways to optimize systems and operational management models, while helping to bring their company to the forefront of this growth. Demand for higher levels of reliability and security are increasing and engineers are looking to alternative solutions to today’s many specialized and segregated industrial communication standards. The latest set of IEEE 802.1 Time Sensitive Networking (TSN) standards represents the next evolution of standard Ethernet technologies, targeted to meet these new market demands.

If you were to look at the command lines in a CLI interface or PuTTY (terminal emulator) interface, which are both cryptic and difficult to navigate, you would be asking yourself the following questions: “What set of skills must I hire to manage my networks?” and “Is this really necessary in the year 2019?”

What does network configuration look like with TSN?
Time Sensitive Networking (TSN) is a collection of Ethernet standards introduced by IEEE, which defines a new set of mechanisms for managing traffic. TSN standards define new functions for Ethernet networking such as traffic shaping, frame pre-emption, traffic scheduling, ingress policing, and seamless redundancy. When all parts of a network are running with the same sense of time, traffic can be coordinated based on a schedule, one method that allows for better control of critical traffic. These features provide a whole new layer of control for managing Ethernet traffic; but from a business perspective, is it worth the investment? And if TSN represents yet another layer of new standards added to an already complex system, how can TSN create a simpler system for the end user?

TSN standards were specifically designed to facilitate system-level configuration and were created with a system view in mind, rather than from a component perspective. TSN enables end-stations to publish their requirements on the network and allows bridges and switches in the system to announce their capabilities to the wider network. As an example, the “P802.1Qcc – Stream Reservation Protocol (SRP) Enhancements and Performance Improvements” specification is one of the mechanisms that allows the network infrastructure to be more intelligent at a system level and to convey the information necessary to move the control plane from a manual configuration workflow to an automated process. 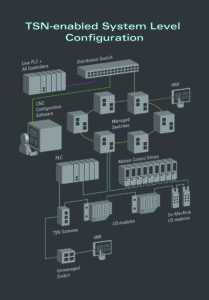 This future architecture gives users a view of a system that allows for the configuration of the I/O and control devices as well as for the layout of the topology and the infrastructure devices. A core principle of TSN is that all network communications are managed so that performance and data delivery are guaranteed.

In the future architecture pictured above, the user has a view of the system that allows for the configuration of the I/O and control devices as well as for the layout of the topology and the infrastructure devices. A core principle of the TSN value proposition is that all network communications are managed so that performance and data delivery are guaranteed. To accomplish this, all devices need to participate in traffic planning by publishing to or notifying the system of its traffic requirements and its capabilities for managing traffic. In this example, a Centralized Network Configuration engine, or CNC, is used to configure the system. In this future reality, the CNC is an intelligent tool, enabled by the information collected and conveyed from TSN standards; it will calculate the best possible solution to accommodate all the traffic flows between all connections in the network. The system sees the available bandwidth and configures the infrastructure components in the network (such as bridges) to accommodate the traffic flows. If the system is not able to solve for a configuration that meets the performance requirements and loads of the traffic streams in the subnet, it will notify the user so that topology, performance requirements, or loading can be modified.

TSN makes it possible to run the calculations that can help the implementor predict if a network design will be successful for a given application. This wasn’t possible in previous generations.

TSN in Industrial IoT Applications – What is the business value?
The industrial market currently requires two types of networking professionals: informational technology (IT) and operational technology (OT). The current industrial control and associated enterprise-wide systems require many IT and OT personnel to manage and configure network infrastructure and control system parameters. Now, with TSN and its potential for smart software, the smart system could handle configuring the network infrastructure. With TSN’s intelligence in the network, it becomes more automated and less dependent on human intervention and subsequent error. 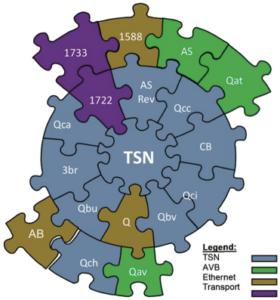 Time Sensitive Networking (TSN) is a collection of Ethernet standards introduced by IEEE, which defines a new set of mechanisms for managing traffic. TSN standards define new functions for Ethernet networking such as traffic shaping, frame pre-emption, traffic scheduling, ingress policing, and seamless redundancy. When all parts of a network are running with the same sense of time, traffic can be coordinated based on a schedule.

Investment in intelligent systems and devices capable of participating in a wider, self-configuring ecosystem can potentially reduce costs. Software Defined Networking (SDN) type tools can enable system-level configuration software, as well as diagnostic and monitoring tools. These new mechanisms would allow the end user to finally manage the network from the manufacturing floor to the business systems.

The benefits of common time
Digitization and its benefits require a time-stamped data collection to provide a chronology of events, time-based analysis, time-series analytics, and finally, a model for predictable outcomes. The analysis of time-stamped data can help system managers see exactly what went wrong, as well as where and when.

TSN provides a common reference of time in which to do this. The same clocks required for traffic scheduling on the network can be synchronized with other time domains for a wider view of system events or faults. Essentially, “TSN time” can be correlated with time in the enterprise systems so that events and conditions on the plant floor are chronologically comparable to events within the company’s business systems. Consider a case where more precise understanding of when a product was completed is needed in manufacturing, with respect to the distribution systems that will move such product to the consumer. In the supply chain, there could be a tighter understanding of when products are completed against when the material to produce such products needs to be reordered. What if the cause and effect of faults on the plant floor could be more easily viewed at a system level through a sequence of events capability, where time is common across the entire manufacturing facility? Such capabilities present an opportunity for higher efficiencies that, ultimately, are reflected in a company’s financial success.

In summary, TSN enables the convergence of networks and systems that were previously kept separate for reasons of operational integrity, real-time performance, safety or security. Breaking down communication barriers between critical and noncritical systems is a foundational concept of the IIoT and Industry 4.0. With TSN and time synchronization, insights from real-time data at the edge arrives on time from anywhere, no matter how demanding the environment. Choosing TSN changes the industrial model and workflow with fewer workers for a more converged and deterministic network built on platforms to protect investments long-term.

However, today, many of the underlying systems for Industry 4.0 applications are based on proprietary standards and could present integration challenges. A lack of a broader industrial networks ecosystem perspective in terms of business systems, platforms and standards as well as interoperability could present a significant challenge for the adoption of industry 4.0 into modern workflows. To take full advantage of these systems, an ecosystem perspective to standards, profiles and tests is what will make these systems interoperable and able to coexist to allow business to derive the maximum value from Industry 4.0 applications.

How is the ecosystem being nurtured?
Many consortia, industry and government bodies as well as standards associations are working to establish standards, associated profiles and tests.

Avnu Alliance is one such body that facilitates a common TSN platform through various services, including open-source software, testing tools, and test plans to develop and verify the correct operation and implementation of TSN-enabled products.

Test plans can be used by test houses, protocol organizations and test equipment manufacturers to ensure the industrial market is testing to the same TSN specifications and guarantee an interoperable network layer for proper system interoperability.

Various industry consortia and standards organizations, such as IEEE and Industrial Internet Consortium, as well as organizations who provide conformance testing for application layers, collaborate to create a set of unified standards and an interoperable ecosystem for the industrial market. Due to the broad set of use cases addressed by IIoT, the market continues to require multiple upper-layer protocols for networked industrial systems. These upper level protocols can share a common TSN foundation.

Since TSN provides a standards-based foundation, system designers and engineers would be able to architect a network that will stay current with evolving use cases.

Authors contributed to this article in their personal capacity. The views expressed are their own and do not necessarily represent the views of Intel Corporation or Rockwell Automation.