Stepping into the land of the Trump resistance, Seema Verma flatly rejected California’s pursuit of single-payer health care as unworkable and dismissed the Affordable Care Act as too flawed to ever succeed.

Speaking Wednesday at the Commonwealth Club here, the administrator of the Centers for Medicare & Medicaid Services said she supports granting states flexibility on health care but indicated she would not give California the leeway it would need to spend federal money on a single-payer system.

“I think a lot of the analysis has shown it’s unaffordable,” Verma said during a question-and-answer session following her speech. “It doesn’t make sense for us to waste time on something that’s not going to work.”

During her speech, Verma issued a broader warning to advocates pushing for a Medicare-for-all program nationally. She said that “socialized” approach to medicine would endanger the program and the health care it provides for millions of older Americans.

“We don’t want to divert the purpose and focus away from our seniors,” Verma said in the address before more than 200 people. “In essence, Medicare for all would become Medicare for none.”

Single-payer has emerged as a key issue in the California governor’s race this year. The current front-runner for governor, Gavin Newsom, a Democrat and the current lieutenant governor, has vowed to pursue a state-run, single-payer system for all Californians if elected in November. Many California lawmakers have endorsed that idea as the next step toward achieving universal coverage and to tackling rising costs. 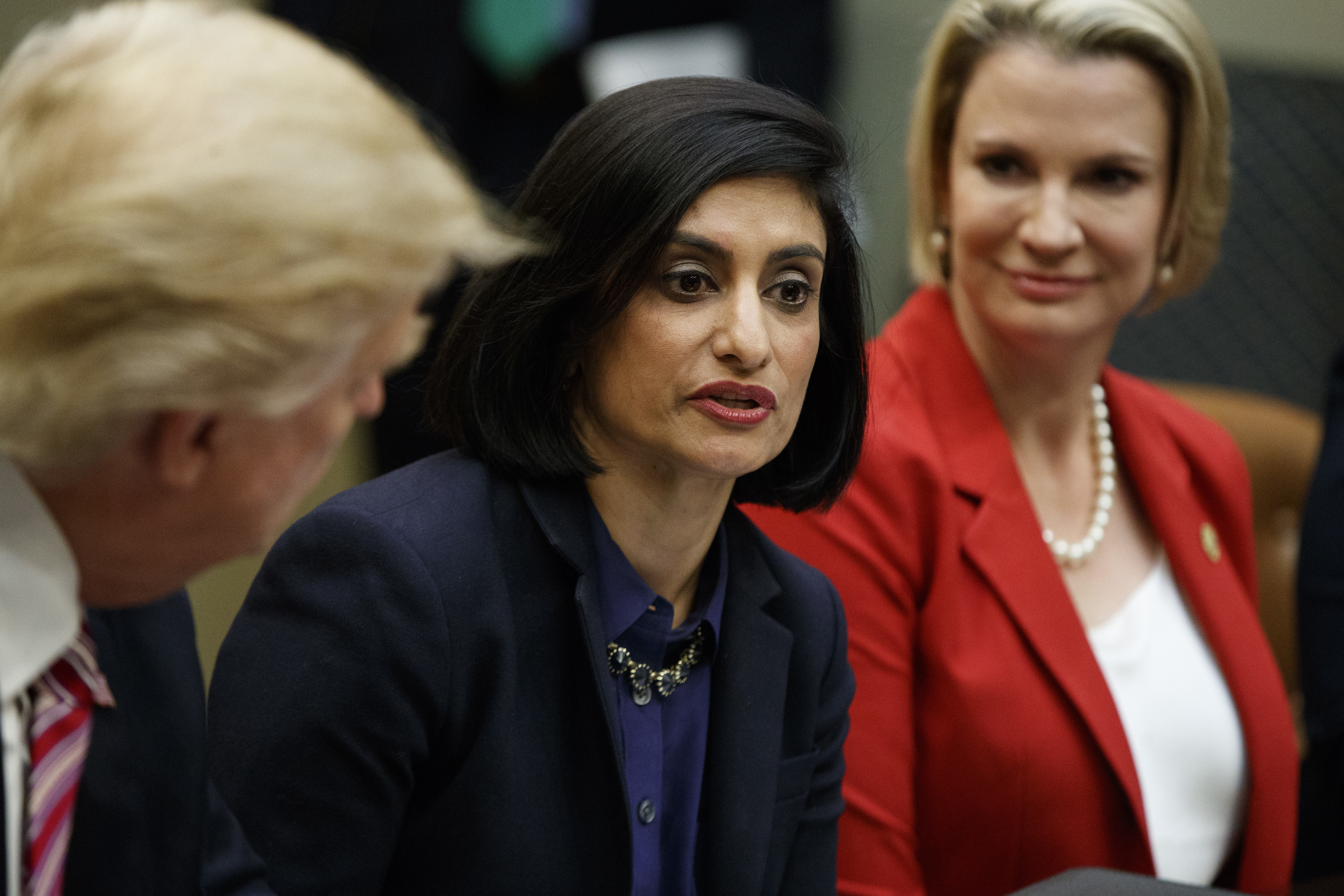 In this March 22, 2017, file photo President Donald Trump , left, and Texas State Sen. Dawn Buckingham, right, listen as Administrator of the Centers for Medicare and Medicaid Services Seema Verma speaks during a meeting on women in healthcare in the Roosevelt Room of the White House in Washington. Verma is slamming ‘Medicare for All,’ the proposal from Vermont Democratic Sen. Bernie Sanders for a national health care plan that would cover all Americans. (AP Photo/Evan Vucci, File)

About 1.4 million Californians buy coverage through the state’s Obamacare exchange, Covered California, and nearly 4 million have joined Medicaid as a result of the program’s expansion under the law.

Verma wields enormous power as head of CMS, overseeing a $1 trillion budget. The agency sets policy for Medicare, Medicaid and the federal insurance exchanges under the ACA.

The landmark health law, she said, was so flawed it could not work without further action from Congress.

“It wasn’t working when we came into office and it continues not to work,” Verma said, responding to a question from moderator Mark Zitter, founder of the Zetema Project, a nonprofit organization that promotes debate on health care across partisan lines. “The program is not designed to be successful.”

Zitter billed the event as a rare chance for Californians to hear directly from a top Trump administration official, although Verma’s remarks broke little new ground, he said.

Trump health care policies figure into many of California’s congressional races this fall in which incumbent Republicans are fending off Democratic challengers. And in court, California Attorney General Xavier Becerra is leading a coalition of attorneys general who are defending the constitutionality of the ACA in a Texas case with national implications.

The Trump administration has sided with the officials waging the lawsuit, choosing not to defend the health law’s protections for people with preexisting conditions. Separately, the administration has backed work requirements for many people on Medicaid.

California’s state Senate passed a law in May banning such requirements as a condition for eligibility in Medi-Cal, the state’s Medicaid program. The bill is pending in the state Assembly.

State lawmakers also are considering bills that would limit the GOP-backed sale of short-term health policies and prevent people from joining association health plans that don’t have robust consumer protections.

In an interview after the speech, Verma criticized those legislative efforts in California because they would limit consumer choice.

“Any efforts to thwart choice and competition and letting Americans make decisions about their health care is bad health policy,” she said.

Peter Lee, executive director of Covered California, the state’s ACA marketplace, has criticized the Trump administration for promoting those cheaper, skimpier policies as an alternative to ACA-compliant plans. He said he fears consumers will be harmed by “bait-and-switch products” that don’t provide comprehensive benefits.

“There have been a series of policies from Washington that have the effect of raising costs, particularly for middle-class Americans, and pricing them out of coverage,” Lee said in an interview last week. “This is not a failure of the ACA. This is entirely happening since the new administration.”

Most of Verma’s speech in San Francisco focused on Medicare. She outlined a number of initiatives designed to strengthen the program and protect taxpayers from ballooning costs. After the speech, CMS announced proposed changes to Medicare payment policies for outpatient care that could yield savings for the government and patients.

In her remarks, Verma reiterated the Trump administration’s efforts to reduce prescription drug prices, improve patients’ access to their own medical records and eliminate burdensome regulations on doctors and other medical providers.

Verma received a polite round of applause at the beginning and end of her appearance.