A Japanese probe landed a new observation robot on an asteroid on Wednesday as it pursues a mission to shed light on the origins of the solar system.

The French-German Mobile Asteroid Surface Scout, or MASCOT, launched from the Hayabusa2 probe, landed safely on Ryugu and was in contact with its team, the lander’s official Twitter account said.

“And then I found myself in a place like no place on Earth. A land full of wonder, mystery and danger!,” the @MASCOT2018 account tweeted.

“I landed on asteroid Ryugu!”

MASCOT is expected to collect a wide range of data on the asteroid, some 300 million kilometres (190 million miles) from Earth.

“It is hugely significant to take data from the surface of an asteroid, we have high expectations for the scientific data,” Hayabusa2 mission manager Makoto Yoshikawa at the Japan Aerospace Exploration Agency (JAXA) told a briefing before the landing.

The 10-kilogram (22-pound) box-shaped MASCOT is loaded with sensors. It can take images at multiple wavelengths, investigate minerals with a microscope, gauge surface temperatures and measure magnetic fields.

MASCOT’s launch comes 10 days after the Hayabusa2 dropped a pair of MINERVA-II micro-rovers on the Ryugu asteroid.

It was the first time that moving, robotic observation devices have been successfully landed on an asteroid. 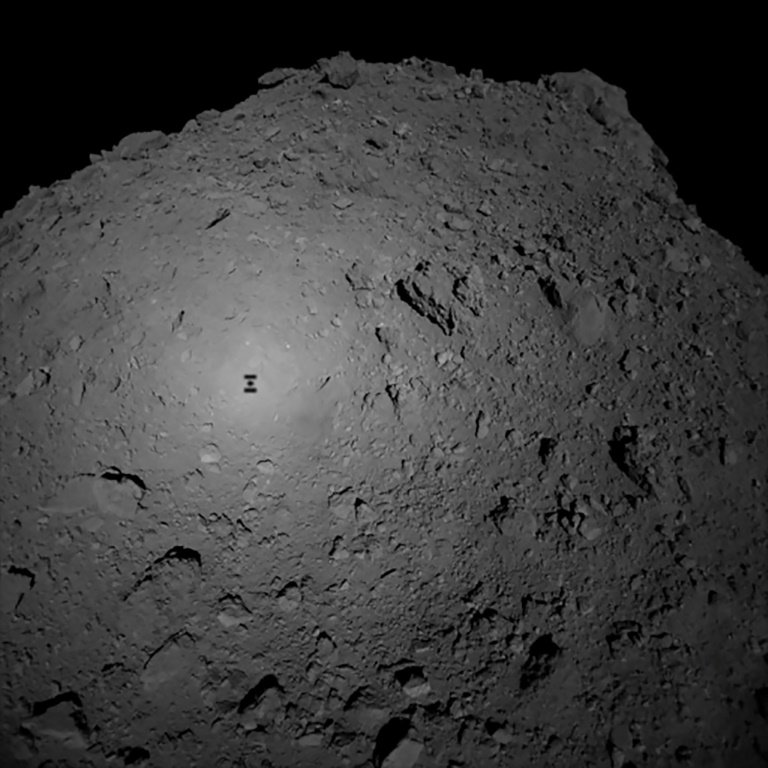 Hayabusa2’s shadow seen on the surface of the Ryugu asteroid it is studying. (Image Source: Phys.org)

The rovers will take advantage of Ryugu’s low gravity to jump around on the surface— travelling as far as 15 metres (49 feet) and staying above the surface for as long as 15 minutes—to survey the asteroid’s physical features with cameras and sensors.

Unlike those machines, MASCOT will be largely immobile—it will “jump” just once on its mission, and it can turn on its sides.

And while the rovers will spend several months on the asteroid, the MASCOT has a maximum battery life of just 16 hours, and will transmit the data it collects to the Hayabusa2 before running out of juice.

The Hayabusa2 is scheduled later this month to deploy an “impactor” that will explode above the asteroid, shooting a two-kilo copper object into it to blast a small crater on the surface.

The probe will then hover over the artificial crater and collect samples using an extended arm.

The samples of “fresh” materials, unexposed to millennia of wind and radiation, could help answer some fundamental questions about life and the universe, including whether elements from space helped give rise to life on Earth.

Part of MASCOT’s mission is to collect data that will help determine where the crater should be created.

Hayabusa2, about the size of a large fridge and equipped with solar panels, is the successor to JAXA’s first asteroid explorer, Hayabusa—Japanese for falcon.

That probe returned from a smaller, potato-shaped, asteroid in 2010 with dust samples despite various setbacks during an epic seven-year odyssey and was hailed as a scientific triumph.

The Hayabusa2 mission, which costs around 30 billion yen ($260 million), was launched in December 2014 and will return to Earth with its samples in 2020.