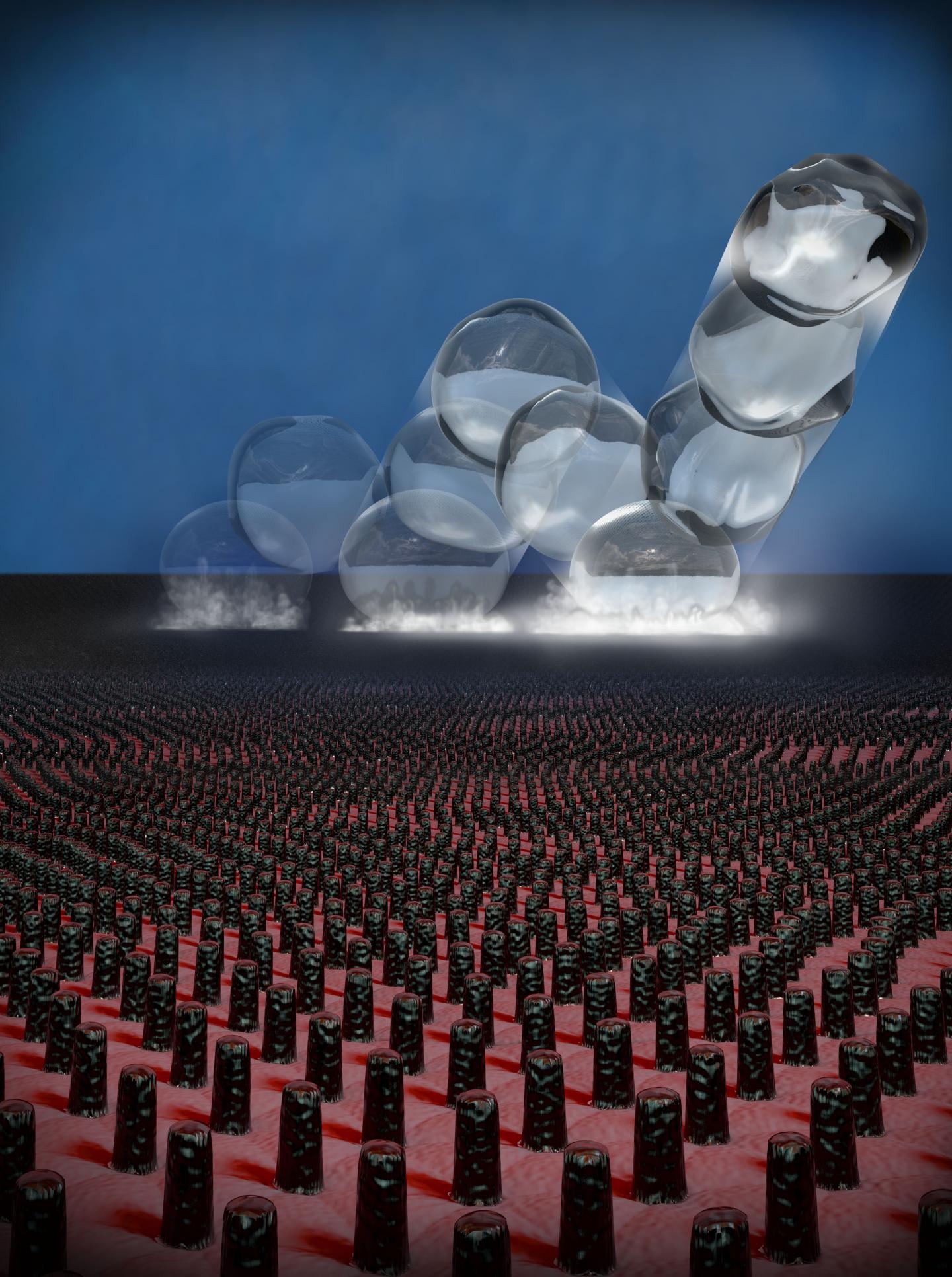 If you travel by plane in the coming months, you might witness a wintry aviation ritual in which ice and snow are cleared off the wings with a special liquid. That is necessary since tiny water droplets in the air may freeze to ice in certain weather conditions when settling on the aircraft’s wings. That, in turn, can lead to turbulent airflow during take-off and hence to reduced lift — a potentially dangerous situation. Even better than this de-icing procedure, of course, would be wings that don’t allow the icy drops to stick or even actively repel them. In a study now published in the science magazine Nature, researchers at ETH Zurich have now shown that it is, in principle, possible to develop materials that are literally allergic to ice and water. To do so, they first taught tiny water droplets how to trampoline.

ETH professor Dimos Poulikakos and his collaborators at the Laboratory of Thermodynamics in Emerging Technologies studied the behaviour of water droplets on surfaces by placing a droplet measuring one millimetre in size on a specially treated rigid silicon surface and then continuously reducing the air pressure in the experimental chamber, with a high speed camera filming the droplet. At first, the drop rested motionless on the surface, but at around a twentieth of normal atmospheric pressure it suddenly jumped up. After a short leap the droplet eventually landed on the surface again, only to jump up again — even higher than the first time. Just like an athlete on a trampoline jumping higher with every rebound from the elastic sheet, the water droplet was propelled higher after each contact with the surface, even though that surface was completely rigid. This may seem like magic to the layman, but the expert sees, above all, what appears as a violation of fundamental physical laws according to which a body falling on a rigid surface shouldn’t be able spontaneously to gain motional energy that allows it to bounce back higher. Still, the trampolining droplet seems to do precisely that.

To understand where the force propelling the droplets upwards comes from, Poulikakos and his post-doctoral students Tom Schutzius and Stefan Jung performed a detailed analysis of the droplet’s motion and, using a thermal imaging camera, the temperature distribution inside it. The ETH scientists, who in recent years have already unravelled a number of mysteries involving water droplets, have now found that the combination of natural water evaporation and the microstructure of the material’s surface are essential for the trampolining phenomenon. The overpressure between the droplet and the surface, resulting from evaporation, launches the drop upwards at each impact, just like a spring would do.

When a water drop that is cooled far below zero degrees centigrade (or ‘supercooled’) starts freezing, evaporation is enhanced by the so-called recalescence. This is a well-known effect in material processing, for instance in tempered iron that, as it cools down, spontaneously heats itself up to a red heat for a short time. The reason for that is the latent heat, which is released as the inside of the piece of iron, solidifies. Something very similar goes on inside a water droplet: as evaporating water on its surface cools it below the freezing point, ice crystals start forming. The heat released in this phase transition from liquid to solid then quickly heats up the droplet to zero degrees. “This heating happens in a few milliseconds”, Schutzius explains, “and as a consequence gives rise to explosive evaporation.” This cools the droplet down again, and the cycle repeats itself. The explosive evaporation produces an even higher overpressure between droplet and surface and causes it to shoot up like a rocket.

The crux of the matter, however, lies in the surface itself. It needs to be rough so that the droplet doesn’t stick to it, but on the other hand it mustn’t be too rough as otherwise the water vapour would escape too quickly through the pores and cracks of the surface, and the rocket effect would literally vanish into thin air. The microstructured silicon surfaces produced by the ETH researchers exactly fulfil these requirements: they are made of a regular array of tiny columns (only a few micrometers wide) with a spacing of roughly five micrometers.

“From the results of our research we can deduce what qualities surfaces need to have in general in order for them to violently repel water and ice, and then design them accordingly”, says Poulikakos. In their experiments the scientists examined different materials including etched aluminium and carbon nanotubes. In order to make the trampoline mechanism even more useful for real-world applications, one would first have to make it work at normal air pressure. Poulikakos and his collaborators hope to make progress in this direction in the next few years. If this is achieved, a host of applications present themselves, ranging from ice-free power lines to road surfacing that repels water and ice. And, possibly, someday the de-icing of airplane wings may no longer be necessary.