“It’s a small town, so they will sometimes bring you chickens, bring you eggs, bring you homemade cakes,” he says. One woman even gave him a puppy. “That was really nice.”

Tauseef was born and raised in Pakistan. After going to medical school there, he applied to come to the U.S. to train as a pediatrician.

It’s a path thousands of foreign-born medical students follow every year — a path that’s been around for more than half a century. And, like most foreign-born physicians, Tauseef came on a J1 visa. That meant after training he had two options: return to Pakistan or work for three years in an area the U.S. government has identified as having a provider shortage. He chose to work with mostly uninsured kids at a pediatric practice in Alexandria, La.

“That was a challenge,” he says, “but it was rewarding as well, because you are taking care of people who there aren’t many to take care for.”

The U.S. medical system depends on doctors like Tauseef, says Andrew Gurman, president of the American Medical Association. He worries that President Donald Trump’s executive order on immigration, which is now on hold after a federal appeals court ruling.

“International medical graduates have been a resource to provide medical care to areas that don’t otherwise have access to physicians,” he says. “With the current uncertainty about those physicians’ immigration status, we don’t know whether or not these areas are going to receive care.” 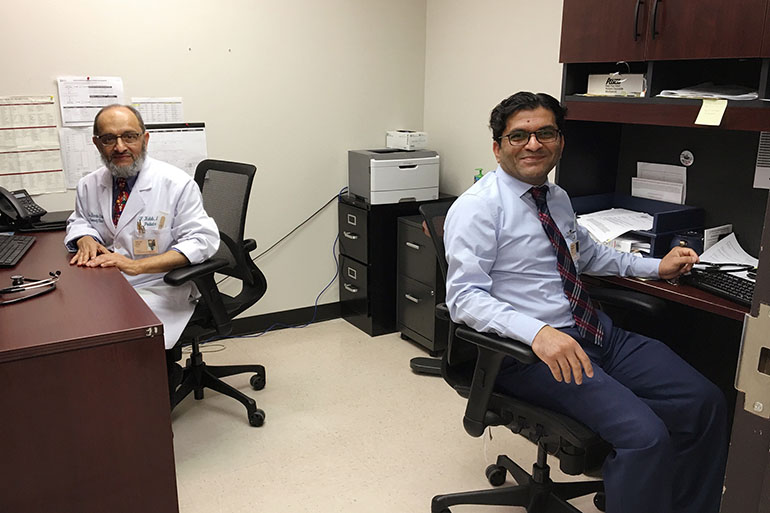 Dr. Farooq Habib, left, and Dr. Muhammad Tauseef share an office at Los Barrios Unidos Community Clinic in Dallas, Texas. They’re both from Pakistan and have both worked as pediatricians in medically underserved areas in the U.S. (Image credit: Lauren Silverman/KERA)

According to the AMA, about 280,000 international medical graduates practice in the U.S. today — that’s about one in four doctors. Some are U.S. citizens who’ve gone abroad for medical school, but most aren’t.

“They don’t all have permanent visas and so a lot of them are concerned about what their status is going to be, whether they can stay, whether they can go home to visit family and still come back, and the communities they serve have similar questions,” Gurman says.

And the care is top-notch. A study just published in the journal BMJ shows Medicare patients treated by doctors from foreign medical schools get just as good care — and sometimes better — than those treated by U.S. medical graduates.

The uncertainty is hitting medical schools at a tough time of the year. Dr. Salahuddin Kazi is in charge of recruiting top students from across the world for the University of Texas Southwestern residency program.

“Typically we have 3,000 people applying for our 61 positions — of those 3,000, at least half of them are international medical graduates,” he says.

Applicants find out their program match in March and usually start working in June. That gives them about 90 days to get a visa. Kazi worries this year that won’t be long enough, and that students from countries included in the travel ban won’t be let in.

“That would create hardship for the hospital, for us, and for our remaining residents,” he says. “They’ll have to pick up more shifts or give up vacation.”

Two-hundred and sixty people have applied for residency in the U.S. from the seven countries included in the travel ban, according to the Association of American Medical Colleges.

Tauseef left Louisiana two years ago but continues to care for low-income patients at Los Barrios Unidos Community Clinic in Dallas. Six of the 30 physicians who work at this clinic are from other countries. Tauseef said they’re all educated to do the same thing.

Tauseef, who has been in this country for 13 years, will apply for U.S. citizenship next month.

This story is part of a partnership that includes KERA, NPR and Kaiser Health News.