President Donald Trump’s administration has ended Affordable Care Act contracts that brought assistance into libraries, businesses and urban neighborhoods in 18 cities, meaning shoppers on the insurance exchanges will have fewer places to turn for help signing up for coverage.

Community groups say the move, announced to them by contractors last week, will make it even more difficult to enroll the uninsured and help people already covered re-enroll or shop for a new policy. That’s already a concern because of consumer confusion stemming from the political wrangling in Washington and a shorter enrollment period. People will have 45 days to shop for 2018 coverage, starting Nov. 1 and ending Dec. 15. In previous years, they had twice that much time.

Some see it as another attempt to undermine the health law’s marketplaces by a president who has suggested he should let “Obamacare” fail. The administration, earlier this year, pulled paid advertising for the sign-up website HealthCare.gov, prompting an inquiry by a federal inspector general into that decision and whether it hurt sign-ups.

Now insurers and advocates are concerned that the administration could further destabilize the marketplaces where people shop for coverage by not promoting them or not enforcing the mandate compelling people to get coverage. The administration has already threatened to withhold payments to insurers to help people afford care, which would prompt insurers to sharply increase prices.

Two companies — McLean, Virginia-based Cognosante LLC and Falls Church, Virginia-based CSRA Inc. — will no longer help with the sign-ups following a decision by Centers for Medicare and Medicaid Services officials not to renew a final option year of the vendors’ contracts. The contracts, awarded in 2013, were never meant to be long term, said CMS spokeswoman Jane Norris in an email.

“These contracts were intended to help CMS provide temporary, in-person enrollment support during the early years” of the exchanges, Norris says. Other federally funded help with enrollment will continue, she said, including a year-round call center and grant-funded navigator programs. The existing program is “robust” and “we have the on-the-ground resources necessary” in key cities, Norris says. 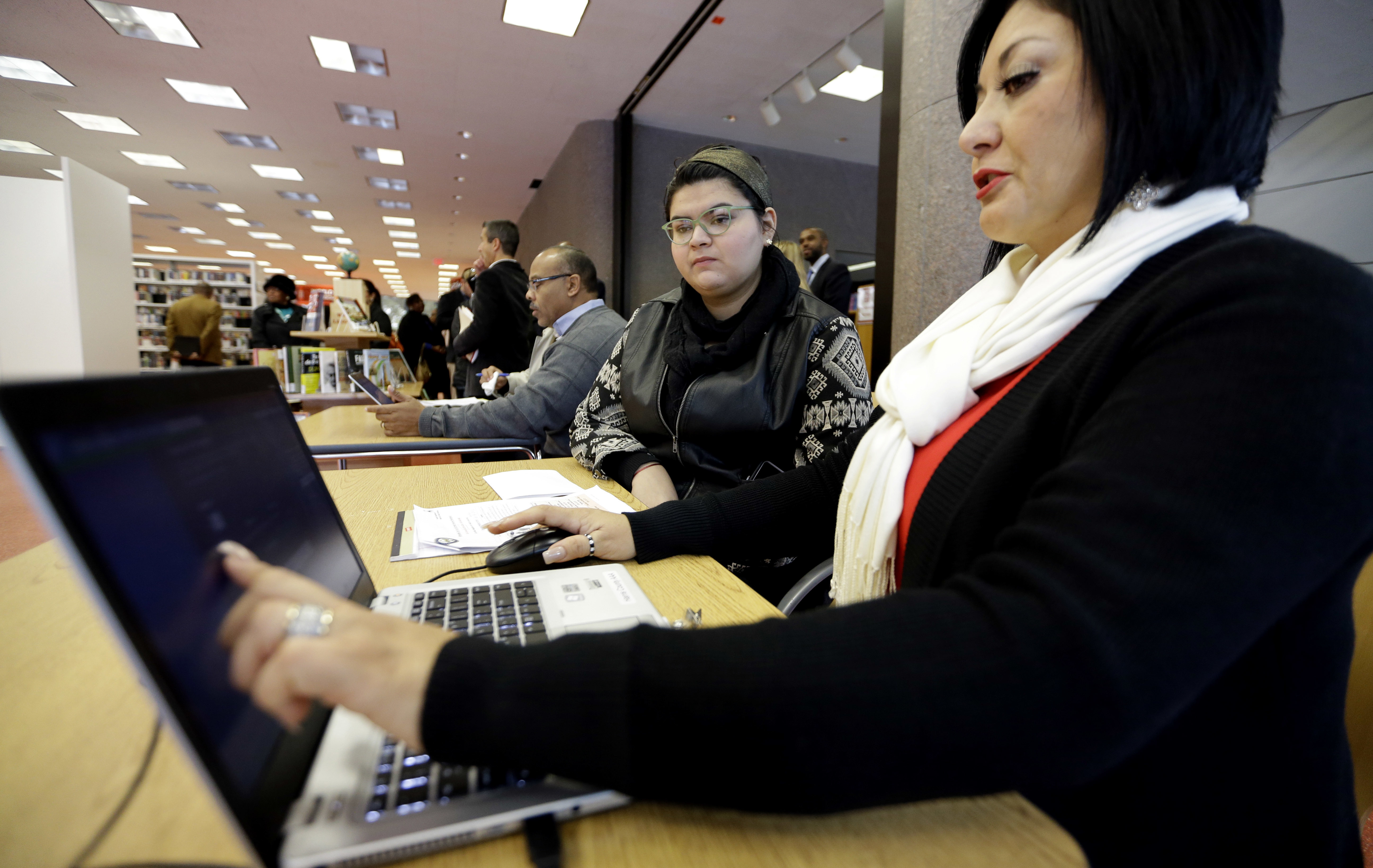 But community advocates expected the vendors’ help for at least another year. “It has our heads spinning about how to meet the needs in communities,” says Inna Rubin of United Way of Metro Chicago, who helps run an Illinois health access coalition.

Together, they assisted 14,500 enrollments, far less than 1 percent of the 9.2 million people who signed up through HealthCare.gov, the insurance marketplace serving most states. But some advocates said the groups focused on the healthy, young adults needed to keep the insurance markets stable and prices down.

The insurance exchanges, accessed by customers through the federal HealthCare.gov or state-run sites, are a way for people to compare and shop for insurance coverage. The health law included grant money for community organizations to train people to help consumers apply for coverage, answer questions and explain differences between the insurance policies offered.

In Illinois, CSRA hired about a dozen enrollment workers to supplement a small enrollment workforce already in the state, Rubin said. The company operated a storefront enrollment center in a Chicago neighborhood from November through April.

“It was a large room in a retail strip mall near public transit with stations set up where people could come in and sit down” with an enrollment worker, Rubin says.

CSRA spokesman Tom Doheny in an email says the company “is proud of the work we have accomplished under this contract.” He referred other questions to federal officials.

Cognosante worked on enrollment in nine cities in seven states, according to a June 6 post on the company’s website. The work included helping “more than 15,000 Texas consumers” and staffing locations “such as public libraries and local business offices.” A Cognosante spokeswoman referred questions to federal officials.

“What is the goal of the Trump administration here? Is it to help people? Or to undermine the Affordable Care Act?” says Rob Restuccia, executive director of Boston-based Community Catalyst, a group trying to preserve the health care law.