Karla Ornelas said she has “always had the idea of being a doctor, I’ve never seen myself doing anything else.” The third-year pre-medical student at the University of California-Davis said she plans to become a family medicine physician and work in California’s Central Valley, where there is a great need for doctors and especially bilingual doctors.

But that dream could be uprooted if the Trump administration goes forward with its plan to end the Deferred Action for Childhood Arrivals (DACA) program, which allows young people brought to the U.S. by their parents without proper documentation to stay and work here. Ornelas, 20, was born in Mexico and came arrived to the U.S. at age 9.

Across the country, Jennifer Rodriguez, 28, faces the same problem. Rodriguez, who works at a psychiatric care facility in Elkhart, Ind., as an administrative assistant, arrived in Goshen, Ind., from Mexico when she was 3, with no recollection of her birthplace and no documents to prove she belonged in the nation she  calls home. Now she is worried that she will be able to stay.

“It’s hurtful that I consider this my home, yet to other people I am an illegal,” she said. 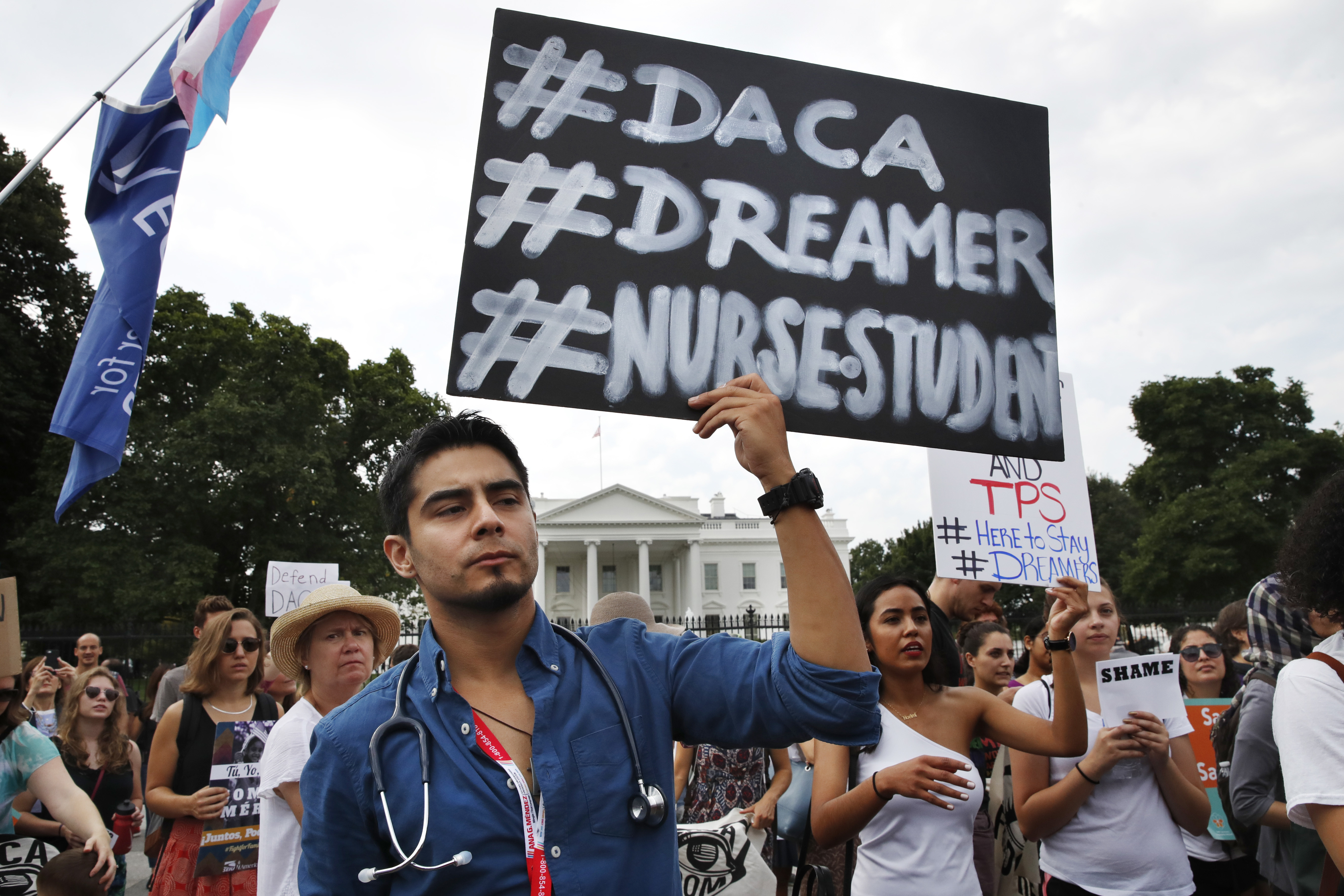 Carlos Esteban, 31, of Woodbridge, Va., a nursing student and recipient of Deferred Action for Childhood Arrivals, known as DACA, rallies with others in support of DACA outside of the White House, in Washington, Tuesday, Sept. 5, 2017. President Donald Trump began dismantling the government program protecting hundreds of thousands of young immigrants who were brought into the country illegally as children. (AP Photo/Jacquelyn Martin)

In 2012, President Barack Obama established the DACA policythat gave a group of about 800,000 children and young adults freedom from concerns about being deported and the opportunity to earn a living.

On Sept. 5, Attorney General Jeff Sessions announced that President Donald Trump would cancel Obama’s executive order that set up DACA. Explaining the decision, the administration said that it did not believe Obama had the authority to set up the program and that it anticipated lawsuits from states seeking to end the program.

The administration is providing a six-month grace period until these protections end, giving Congress time to pass legislation to address the legal status of these immigrants, known as “Dreamers.”  Trump and Democratic lawmakers have agreed to work on a plan to extend the DACA program, but there are few details and conservatives have raised concerns.

There are no firm statistics showing how many Dreamers work in the health care sector, but industry leaders suggested that DACA’s end could have an impact, especially among medical students and home health aides.

“Even with the ‘wind down process’ described by the administration, the implications of this action for medical students, medical residents, and researchers with DACA status are serious, and will interfere with their ability to complete their training and contribute meaningfully to the health of the nation,” the group wrote.

The American Medical Association (AMA) said the administration’s announcement “could have severe consequences for many in the health care workforce, impacting patients and our nation’s health care system.” It urged Congress to pass a permanent solution.

“The more the administration threatens immigrants and their families and their communities,” said Robert Espinoza, vice president of policy at PHI, a long-term care advocacy group, “the more we threaten that workforce supply.”

One segment of the health care workforce that could be affected are medical students.

Students and residents may have to cut their training short, the AAMC said, and researchers may have to leave the country before completing their experiments. Foreign-born and international medical graduates also tend to work in underserved areas, said Matthew Shick, director of government relations and regulatory affairs at AAMC. Phasing out DACA could also sever a lifeline connection between doctors and populations in sore need of health care.

Ornelas, whose family settled in Turlock, Calif., feels that need. For example, she said she accompanied her mother to a doctor’s appointment, as she usually does to help translate. Her mother, she said, had questions about lab results, and as her mother asked in Spanish and Ornelas repeated in English, the doctor grew impatient, told them to stop asking questions and walked out of the room.

“My mom wanted to cry, and I was shocked,” Ornelas said. “That’s when I realized that it wasn’t just my mom, it was an entire community that was relying on this doctor for health care.”

Sixty-five Dreamers were enrolled in medical schools across the nation during the last academic year, Shick said.

“It sounds like a small number,” he said, “but they’re treating anywhere between 1,000 and 2,000 patients in their clinical panel.”

Those medical students are needed to serve neglected communities as well as to alleviate the shortage of doctors. The AAMC projects a shortage of between 40,800 and 104,900 physicians by 2030. More than 43,000 of the empty slots are for primary care physicians.

Kurt Mosley, vice president of strategic alliances for Merritt Hawkins, a physician recruitment company, said he is unsure if there are any Dreamers practicing medicine given that group’s age (recipients were required to be younger than 31 at the time of the executive order).

DACA’s end could also have a large impact on the country’s ability to care for patients in a culturally sensitive manner, he said. And statistics point to the need — minorities are expected to constitute the majority of the U.S. population by 2044, according to the U.S. Census Bureau. By 2060, Hispanics — who make up the bulk of Dreamers — are expected to account for nearly29 percent of the U.S. population.

“You know we’re a nation of diversity, and our workforce should reflect that,” Mosley said. “And [dissolving DACA] is a step backwards.” Health care already relies on immigrants to fill the ranks. Over a fifth of Dreamers work in the health care or education industries, according to a 2016 survey by groups including the National Immigration Law Center and the Center for American Progress. Moreover, based on a separate 2015 survey by the immigrant advocacy organization United We Dream, nearly 23 percent want to pursue a career in health care.

Another sector of the workforce that heavily relies on foreign-born employees is direct care, which includes nurse aides, home health aides and personal care assistants. According to Espinoza, one-quarter of all employees are immigrants.

As the population ages, those jobs will continue to be in high demand. It’s hard to tell whether the vacancies that may be created by immigrants forced out of their jobs could be filled by the remaining population, he said.

“What our sector needs most is care,” Espinoza said. “And these kinds of federal decisions impede that — it impedes our ability to provide care.”

Rodriguez said she sees that need at her job often. The Latino clients frequently approach her for help, she said, recognizing a friendly face and asking in bits of broken English whether their native Spanish is familiar to her.

Interpreting for clients doesn’t fall under her job description, and her boss sometimes tells her to say no when she’s overwhelmed.

“But I would never do that to my people,” Rodriguez said. She wants to stay in the country and continue her work and life here.

Without DACA, Rodriguez said, she would have trouble caring for her family. She has two daughters and just purchased a home.

She is married to an American citizen, so she has petitioned for residency. However, the application is still being processed, she said, which means she relies on DACA to stay employed and keep her driver’s license. Many of her family members also depend on the program for legal protection, and she said she is worried what will happen to them.

Rodriguez identifies herself as a Mexican-American who considers Indiana home.

“This is all we know, and we just want to be productive citizens,” she said. “That’s all.”

This story was produced by Kaiser Health News, which publishes California Healthline, an editorially independent service of the California Health Care Foundation. This KHN story also ran in USA Today.​