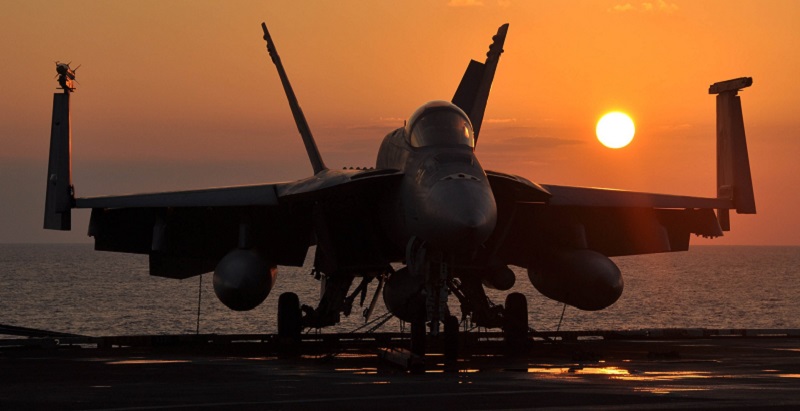 An F-18 Super Hornet on board an aircraft carrier.

Carrier air wings are becoming less effective as more short-range fighter planes are rolled out and the nature of warfighting changes, according to a report by the Washington D.C. think tank the Center for a New American Security (CNAS).

The report, authored by Jerry Hendrix, covers the history of carrier air wings from the invention of the aircraft carrier in the 1910s to today.

Today’s focus on short-range aircraft was rooted in the political landscape of the Cold War and the 1990s, he wrote. After the Cold War, countries focused on keeping the cost of military hardware down, and had an optimistic view of the strategic environment. The expensive, long-range A-12 Avenger II was cancelled in the early 1990s, and aircraft such as the A-6 Intruders and F-14 Tomcats were replaced with shorter-range F/A-18E/F Super Hornets.

Countries such as North Korea, Iran, Russia, and China continue to develop anti-carrier air defenses in order to keep enemy forces away from their shores.

The F-35 fighter has been criticized for a host of unexpected costs and operations problems, and its role in carrier air settings were no different: its range is 516 nautical miles to 550 nm depending on the variant, several hundred nautical miles shorter than the fourth generation Tomcat and Intruder aircraft.

Hendrix recommends that the Navy work to keep aircraft carriers relevant in future missions. New long-range, deep-strike aircraft like the A-3 Skywarrior or A-6 Intruder of the past could fly more than 1,500 nm and penetrate anti-air defenses.

In today’s technology and conflict climate, drone craft could also be part of this solution. The X-47B currently serves as a bridge between piloted and autonomous aircraft. It is in testing at present, and the Navy has issued requests for information about other autonomous armed vehicles. These could both extend the range of a carrier air wing and increase persistence, allowing craft to remain present and on-station for days at a time. The size of the air carrier wing should also be increased, he said, from the present standard of 60-plus aircraft to the historic average of 80-plus aircraft. Depending on the Navy’s decisions going forward, range could be extended, or could continue to fall lower than it has in the past.

The complete report can be found at CNAS.