The VA001 unmanned aerial vehicle (UAV) from Vanilla Aircraft recently completed a continuous, 56-hour aerial journey. The aircraft was initially scheduled for 120-hours of flight, but perilous weather forecasts cut this feat of endurance shorter than previously planned. Without refueling, the aircraft carried a 20-pound payload at an altitude of 7,500 feet for the record-setting voyage, but the vehicle is designed to carry a 30-pound payload at 15,000 feet for up to 10 days.

The VA001 is programmed to relay intelligence, surveillance, and reconnaissance (ISR) data, as well as extend communications by creating an aerial mesh network. Even with high-performance standards, this UAV design focuses on a low-cost, endurance-based platform. The image below documents the long exposure view of the UAV’s impressive flight path. 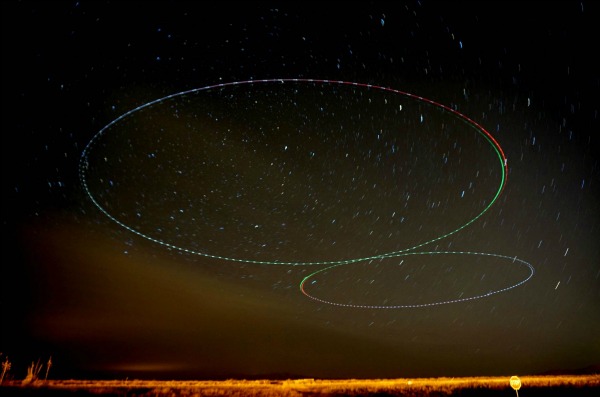 “The VA001 has transformational potential, providing a scalable aerial system solution without increasing personnel or operating costs. The ability of a low-cost platform to provide persistent surveillance, battlefield pattern of life, or aerial mesh network relay, in a responsive and robust manner, and without forward basing, does not currently exist,” says Neil Boertlein, co-founder and chief engineer at Vanilla Aircraft.

Vanilla Aircraft is hoping to extend its influence within the commercial drone market, focusing on surveying and agricultural applications. Until then, further test flights are scheduled for 2017, expanding the VA001’s endurance, altitude, and payload capabilities.