On the quest for miniaturization, scientists at the Center for Integrated Nanostructure Physics, within the Institute for Basic Science (IBS, South Korea), in collaboration with researchers from the University of Birmingham and the Korea Advanced Institute of Science and Technology (KAIST), develop credit card-thick, flat lenses with tunable features. These optical devices, made of graphene and a punctured gold surface, could become optical components for advanced applications, such as amplitude tunable lenses, lasers (i.e. vortex phase plates), and dynamic holography.

Metasurfaces are new 2-D materials that can effectively control the electric and magnetic components of light (and other electromagnetic waves) and bend them to bespoken directions. Controlling the beam’s direction can bring out interesting phenomena; the most incredible being the “invisibility cloak effect”, where light waves bypass an object recreating the image beyond the object, as flowing water in a river would bypass a stone.

Published in Advanced Optical Materials, the study presents the properties of a metasurface which works as a convex lens. Specifically, it is made of a gold sheet pierced with micrometer-sized U-shaped holes and covered with graphene. As the shape of common convex lenses allows light to be concentrated on a spot (or focus), think about a magnifying glass which can concentrate a light beam and even start a fire, so the particular pattern of the tiny apertures of the metalenses works by focusing the incoming beam.

In addition, these microholes can also change light polarization. While natural light is generally unpolarized before being reflected, the team used circularly polarized waves, that is a light beam where the direction of the electric field is corkscrew spiraling. This metalens can convert the left-circular polarization wave (going counterclockwise if seen straight in front) to right-circular polarization (clockwise). The researchers managed to obtain a conversion rate of 35 percent. Converting circular polarization could be useful in a number of fields, for example biosensing and telecommunications.

In order to control even more properties, the scientists took advantage of graphene’s unique electronic features and used them to tune the output beam’s intensity or amplitude. Here graphene plays the role of the exposure of a camera. In the case of the camera, a mechanical control allows a certain shutter’s opening time and size to determine the amount of light entering the instrument. These metalenses instead, regulate the exposure via an electric tension applied to the graphene sheet, without the need for bulky components. When voltage is applied to the graphene layer, the output beam becomes weaker. “Using metalenses, you can make microscopes, cameras, and tools used in very sensitive optical measurements, much more compact,” says Teun-Teun Kim.

The metalenses were designed for a type of electromagnetic wave, which falls in-between infrared radiation and microwave radiation, called terahertz radiation. This type of radiation can pass through some materials (like fabrics and plastics), but at a shorter depth than microwave radiation, for this reason it is employed for surveillance and security screening.

“While conventional optical lenses have a thickness of several centimeters to several millimeters, this metalens is just a few tens of micrometers thick. The intensity of the focused light can be effectively controlled and it could find useful applications in ultra-small optical instruments,” says Teun-Teun Kim. 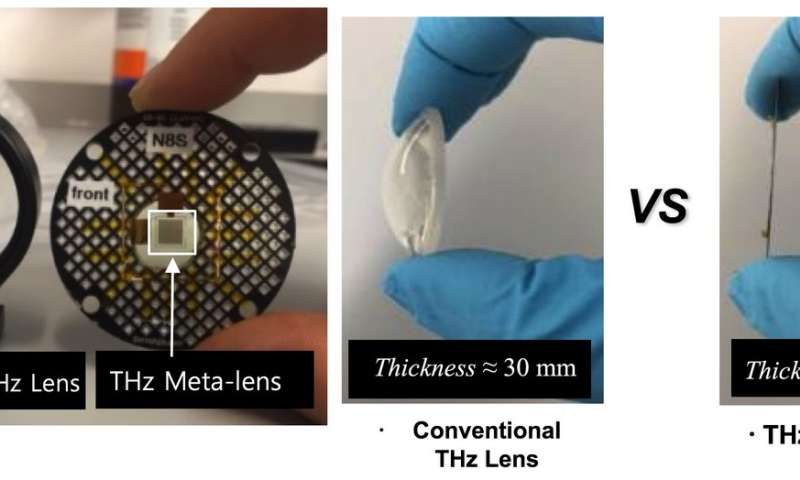 Comparison between conventional lenses and metalenses for terahertz (THz) radiation. Metalenses are ultrathin (around 25 micrometers in thickness) and also very flat compared with conventional ones. (Image Credit: Institute for Basic Science)