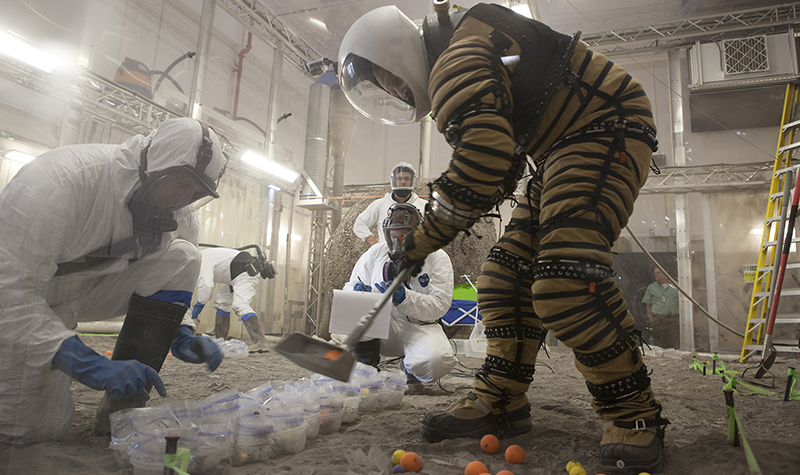 The spacesuits astronauts will wear while exploring the surface of Mars will protect the person inside, supply air and water, and be flexible enough that astronauts can dig samples and do the other tasks required.

Those are big jobs for a device that sounds like something someone might pick out of a closet and zip on like a heavy parka. That’s why engineers from the University of North Dakota who are evaluating their suit design at Kennedy would really prefer a different term.

“‘Suit’ is really kind of a misnomer,” said Pablo De Leon, the researcher leading this week’s evaluations. “Containing a human being into anything is very complex, so we have a spacesuit which is really a miniaturized spacecraft, and it has to be built in a way that is mobile, fairly comfortable and lets you work. It’s really much more of a machine.”

The prototype De Leon and his team are analyzing is called the NDX-1. The suit is good for trying different technologies but is not necessarily a product that would work as-is on another world.

That’s why researchers are taking deliberate and innovative steps to test carefully to show different possibilities. During the suit performance tests, the team also will evaluate self-developed surface sampling tools that were based on Apollo-era designs. 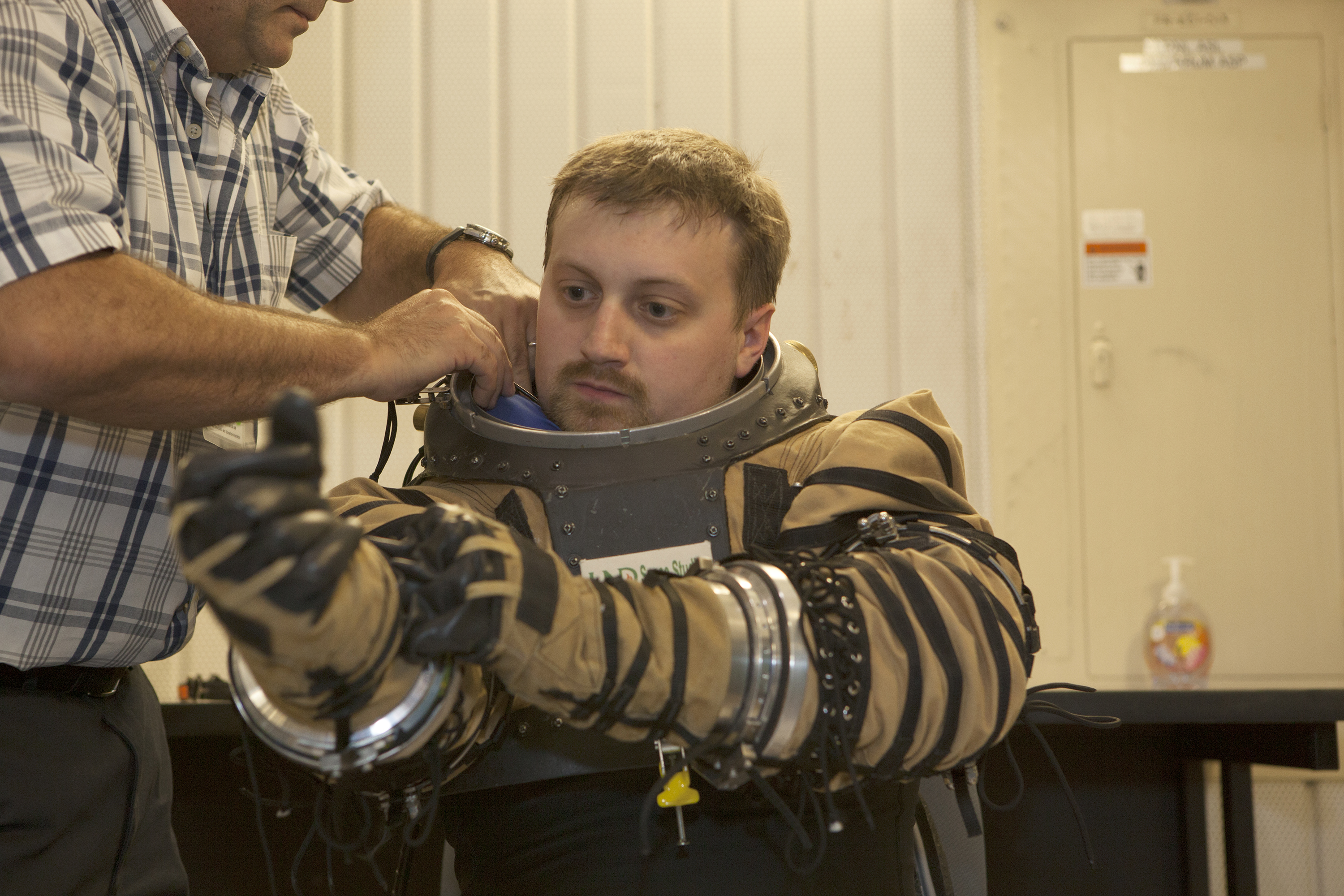 Travis Nelson, a graduate researcher at the University of North Dakota, adjusts the sleeves on the NDX-1 spacesuit while Pablo De Leon, left, of the university’s Department of Space Studies adjusts the neck ring. Credits: NASA/Dmitri Gerondidakis

NASA’s Johnson Space Center designed and built two spacesuit prototypes, known as the Prototype Exploration Suite (PXS), for use in low- and zero-gravity, and the Z-2, which is testing mobility technology for surface exploration of Mars.

NASA’s prototype suits focus on technology demonstrations for a planetary surface suit, improving suit fit and performance, and upgrades to the life support systems while minimizing the amount of equipment required to keep the suit operational.

Using modern, lightweight materials, the NDX-1 is meant to be a self-contained machine that could protect astronauts from the cold Martian atmosphere and dust storms. With a rusty orange color and black ribbing, the prototype suit also is designed to let them drill into the surface to gather samples, excavate rocks and generally conduct the first human explorations of the Red Planet.

“Our intention is to advance the state-of-the-art in spacesuit designs and engineering and try to provide solutions for tomorrow’s explorers,” De Leon said. “We are just trying to help NASA and the contractors to get an easier task when they start to look at other designs. If it’s a new joint that we contribute, or a way to close a suit or a new boot, then we will feel happy because we have played our part.”

After conducting tests throughout the American southwest and other desert areas, the researchers came down to Florida to try it out in the regolith simulant bin at Swamp Works, an enclosed area filled with soil that is similar to that found on worlds other than Earth. It carries the same fine, talcum powder texture that was found on the moon and holds up well in comparison to materials known to be on Mars.

Researchers work inside and outside the regolith bin at Kennedy Space Center’s SwampWorks during testing of spacesuit design elements. The in features simulated soil astronauts would be working with on other worlds. Credits: NASA/Dmitri Gerondidakis

“We’re glad to open our doors to the NDX-1 team,” said Jack Fox, chief of Kennedy’s science and technology projects division. “Swamp Works is a one-of-a-kind facility, and we’re happy to help the team advance this technology that could ultimately benefit NASA and future explorers.”

Enabling this kind of advance testing of technologies fits with NASA’s history of developing and testing transformative capabilities and cutting-edge exploration technologies, maturing them from early stages to drive innovation.

For designers, the regolith bin offers a realistic simulation as joints and other components could become contaminated during a real mission with astronauts far from home.

“What you guys have here is an amazing asset for all future exploration,” De Leon said. “We really believe that a trip to Mars will require the best abilities of the nation. The students and researchers are getting real training in a real-world scenario and doing research. They will become better prepared, and they will be ready.”

The tests at Kennedy will compare the NDX-1 suit and a second prototype that is somewhat heavier and moves a bit differently but offers a different kind of protection. Engineers want to see if the difference in designs wears people out quicker, is perhaps too awkward for some work or, in fact, functions substantially better.

“The design of the suit is something that takes time,” De Leon said. “Normally, we need two to three years to go from first preliminary concept to having a spacesuit in a preliminary test. You’re never finished. We will always be trying to improve to make it better and better.”

Some of the funding for the University of North Dakota’s spacesuit research has been provided through NASA’s Experimental Program to Stimulate Competitive Research, or EPSCoR, which establishes partnerships with government, higher education and industry that are designed to effect lasting improvements in a state’s or region’s research infrastructure, research and development capacity, and hence, its national research and development competitiveness.