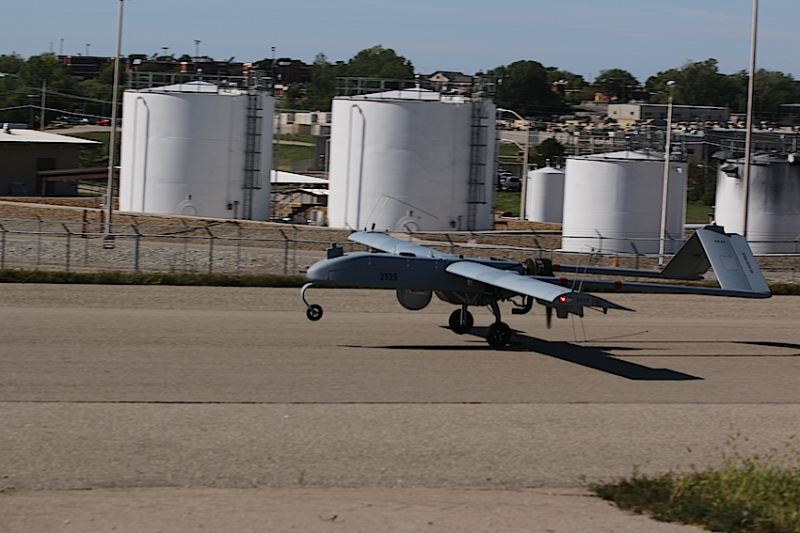 The RQ-7B Shadow Unmanned Aerial System lands after making its historic flight Sept. 30 at the Custer Hill Shadow Facility on Fort Riley, Kan. This was the first time in the Army an unmanned aerial system was flown in FAA-approved airspace. (US Army photo)

The 1st Infantry Division made history Sept. 30 by flying an unmanned aerial system for the first time in the Army in Federal Aviation Administration-controlled airspace.

“Because we were flying at a much higher altitude, there are risks of collisions with commercial aircraft,” Tressel said.

Chief Warrant Officer 4 Samuel Kleinbeck, an unmanned aircraft systems technician with G3 Air, 1st Inf. Div., said because they are inherently different from manned aircraft, introducing a UAS into national airspace was challenging for both the FAA and aviation community, which is why they introduced safety measures.

“One of the biggest safety measures we used was to have two UH-60 Black Hawk helicopters with aerial observers following the UAS,” said Chief Warrant Officer 2 Phil Schleicher, a UAS platoon leader with Company D, 1st Eng. Bn., 1st ABCT, 1st Inf. Div. “We also chose a flight path with the least amount of civilian populous, just in case something happened to the aircraft.”

Kleinbeck, a native of Richmond, Missouri, said all risks associated with the flight had to be minimized before the FAA would approve the flight.

“The FAA expressed some serious concerns at first,” Kleinbeck said. “But we were able to prove this could be done safely by putting the risk mitigation into our plan, so they agreed for us to proceed with the flight.”

Kleinbeck said the flight paved the way for units to essentially extend the available airspace for all UASs operating at Fort Riley, which enabled an increased capability for manned-unmanned teaming operations within the Fort Riley aviation community.

“First and foremost, this proves that the Fort Riley UAS community and supporting agencies do have the ability to coordinate a safe and effective UAS flight through the National Airspace System from one restricted area to another,” Kleinbeck said. “It also provides the Fort Riley UAS community with the benefit of an increased operating area, allowing us to train outside of Fort Riley airspace, creating opportunities to conduct manned and unmanned teaming with different aviation assets, to include the U.S. Air Force.”

Kleinbeck said the project had been 18 months in the making, from theory to first flight, and was a total team effort within the division and Fort Riley, involving both civilian and military personnel who helped build the corridor and make the flight a success.

“Being part of this historic, groundbreaking flight was wonderful,” Schleicher said. “The fact that we were able to make this flight possible speaks volumes.”