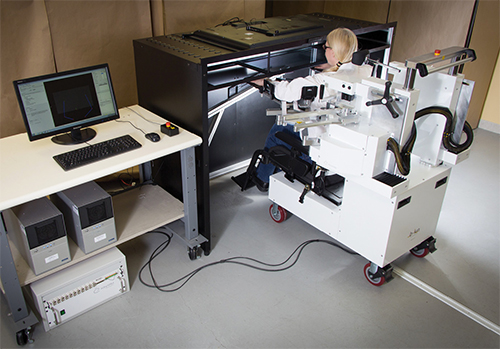 Clinicians have always had to rely on a patient’s behaviour and movement to diagnose a brain injury or track the impact of neurological diseases. Today, with advanced technology, clinician-scientists have a more precise window on brain function and they are driving new approaches to managing brain injuries and disease.

BKIN Technologies is transforming the assessment of brain-injuries by putting robotic technology in the hands of neuroscientists and clinician scientists around the world. KINARM Labs were invented by Dr. Stephen Scott, a professor in the Department of Biomedical and Molecular Sciences and the Centre for Neuroscience Studies at Queen’s University in Canada. Over 15 years ago, he assembled a team of physicists, neuroscientists and machinists to design a robotic exoskeleton that could precisely move and monitor a person’s arm. Because of his understanding of the brain circuits involved in making healthy arm movements, he was able to create a proprietary suite of tests that allows him to provide a complete brain function assessment in a short period of time.

“It enables researchers to create a ‘fingerprint’, if you will, of the patient’s unique neurological condition. Traditional testing methods, such as touching a finger to the nose or bouncing a ball, just don’t capture the complexity of brain processes necessary for everyday activities such as preparing dinner or driving a car,” says Scott. 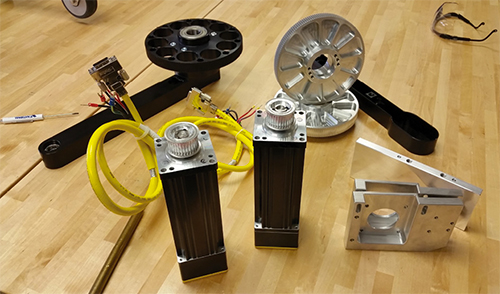 One of the major challenges facing Dr. Scott and his research and development team at Queen’s University was the complexity of the robotic system itself. A person either sits in a chair with robotic arms affixed (KINARM Exoskeleton Lab) or grasps on to two robotic manipulandums (KINARM End-Point Lab). The robotics are combined with an augmented reality system which creates a virtual environment where subjects perform tasks, such as directing a hand to a target, or interacting with an object in the environment. A robotic exoskeleton used to analyze human limb kinematics must not only be precise in every minute detail, but also allow a person in the lab to perform active, real-world actions.

The key component that enables smooth, natural, non-jerky robotic movement is the slotless motor. This motor powers and drives the robot through a pulley and belt mechanism. The connection between the motor and the master pulley is therefore critical, requiring zero backlash and no slippage. The initial KINARM Lab design used a pulley that attached to the motor shaft using set-screws. However, the constant changing of motor direction during operation produces high shock loads on this motor-pulley connection, which in the prototype KINARM Labs caused the set screws in the pulley to loosen, resulting in backlash, shaft damage and eventual system failure. A viable coupling solution had to be found.

After an extensive search, BKIN’s engineers connected with Custom Machine and Tool Co., Inc. (CMT) of Hanover, Massachusetts. They learned that CMT had designed and patented a more reliable connection system, the Concentric Maxi Torque bushing system, which offers zero backlash and high clamping torques. Along with the additional benefits of its low profile design, which allowed for direct coupling to the motor shaft, its ease of positioning and the elimination of shaft damage due to its mechanical shrink fit, this connection system was the choice for the KINARM Exoskeleton Lab. 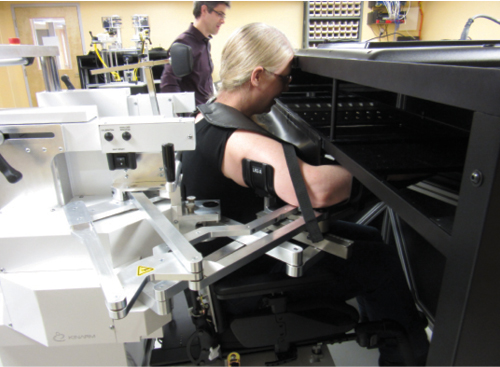 Pulley and bushing are sold together as an assembly (it’s not something CMT would rework into an existing pulley). There is a mechanical shrink fit affected by using a setscrew, axial to the shaft, as a lever to force the tapered bushing into the matching taper in the hub. As the lever forces the two tapers together, the slot in the bushing is compressed, thus clamping the pulley to the shaft with a mechanical shrink fit. That same set screw is removed and used on the opposite hole, which acts as a jack, releasing the shrink fit and allowing for removal or re-positioning.

Filed Under: TECHNOLOGIES + PRODUCTS, The Robot Report
Tagged With: cmtco