Countless people die every year in road accidents. To improve the safety of vehicle occupants, it has been customary for decades to carry out crash-tests using dummies. These crash-test dummies are increasingly getting virtual support in the form of computer models that simulate the defensive behavior of humans before a collision. Researchers at the Fraunhofer Institute for High-Speed Dynamics, Ernst-Mach-Institut, EMI are among those using virtual human-body models in crash simulations, which yield more realistic conclusions about the injury risk. In their calculations, the researchers focus especially on muscle stiffness, which has not been taken into account in previous investigations.

Vehicle occupants instinctively take defensive action to prepare themselves for the impact. They tense their muscles and, in the case of the driver, brace themselves against the steering wheel while keeping their foot held down on the brake pedal. This behavior influences the outcome of the accident. Because conventional crash-test dummies are unable to react to an imminent crash, they cannot be used to model human behavior. In the automotive sector, therefore, digital computer models are increasingly being used in finite element (FE) simulations in order to reproduce the posture of occupants shortly before an accident and thus improve the safety of automobiles. “The muscular system has a big influence on how a vehicle occupant reacts shortly before an accident and on body movement during the crash. There can be substantial, critical divergences compared to stiff and kinematically restricted crash-test dummies,” says Dr. Matthias Boljen, scientist at Fraunhofer EMI.

The engineer and his team use digital human-body models as part of FE simulations. In the most recent FE tests, they focused on muscle stiffness when evaluating occupant safety. The researchers investigated the effects of changes in muscle stiffness on the kinematics of occupants, which meant breaking new scientific ground. Previous research had only simulated movement generation through muscle contraction in human models, but not the muscle stiffness that goes together with the contraction. “If a driver braces against the steering wheel before a collision, this not only shortens the muscle, but the muscle also becomes more stiff through the contraction. In previous FE simulations of individual muscles and groups of muscles in whole-body models, the effect of muscle contraction was completely ignored,” explains the researcher.

This omission was addressed by Niclas Trube, a colleague of Boljen’s, who used THUMS (Total Human Model for Safety) Version 5 for his investigations. He defined four different states of stiffness and tested the influence of these changes in a simulated frontal collision. The conclusion was that muscle stiffness has a decisive influence on the behavior of vehicle occupants. Depending on the degree of stiffness, different kinds of injuries can be expected in an accident. 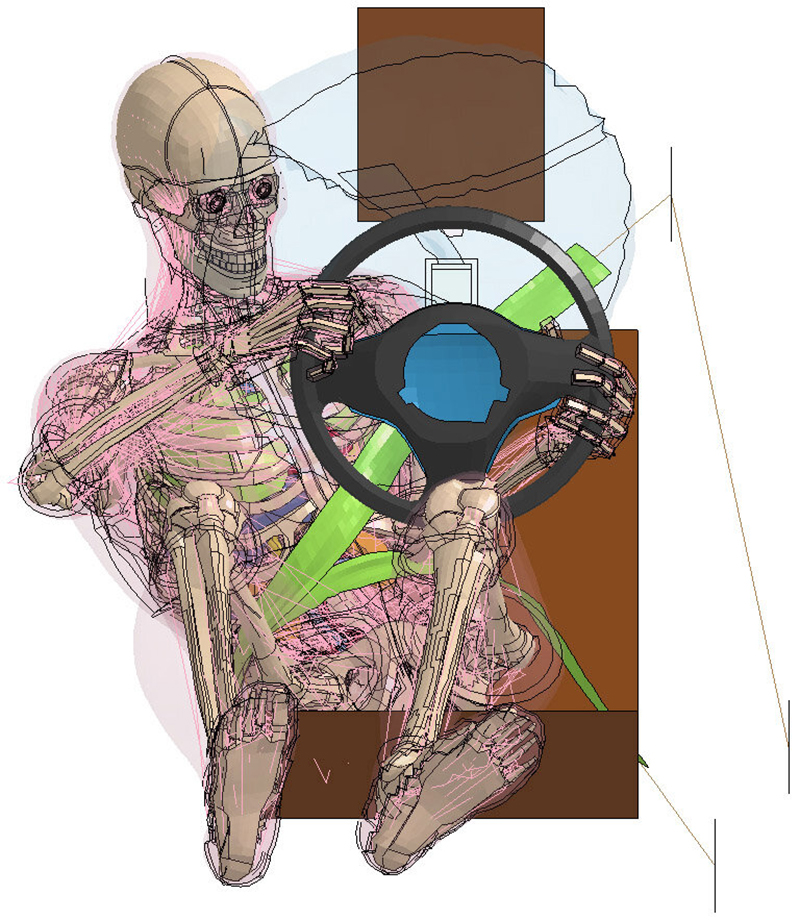 Offset-crash simulation in which THUMS™ v5.01 has tensed muscles. It clearly illustrates the possible challenges for passive safety in an accident scenario other than a frontal collision: the shoulder harness slips off. Credit: Fraunhofer-Gesellschaft

“This finding could be of major importance for the further development of human models, in particular with respect to self-driving cars. Vehicle interiors will be redesigned in future, which means that existing seat belt and airbag concepts will also have to be reassessed. Human models are a valuable tool for doing this,” says Trube.

Digital human models can also be used for the protection of pedestrians and cyclists. The need for action on this score has been shown by recent studies, which attest to an increased occurrence of surprising hazardous situations brought about by e-bikes. Electric scooters will be allowed on public roads in Germany as of later this year. Traffic experts fear a further rise in accidents. Using human models, accident scenarios can be investigated in advance. Depending on the defensive behavior, the frequency and intensity of the stresses arising can be tested. Manufacturers of guards, helmets and other protective equipment could benefit from the recommendations.

How the human body reacts to mechanical stresses is not only of interest to the transportation sector, however, but also for a variety of medical and ergonomic concerns. How do materials used in implants and prostheses behave in relation to human bones when they are put under sudden stress? How do vibrations from power tools affect the user? “Human models are ideal for such applications, as we can create realistic virtual models with them, something that cannot be achieved in the same way with experiments,” says Boljen.