WAGO Corporation’s new WAGO-I/O-SYSTEM 750 XTR combines the successful features of the WAGO-I/O-SYSTEM with expanded specifications for use in extreme environments. Reliability in extreme temperatures, vibration and shock resistance, and protection against EMC interference are the fundamental features of the XTR. The 750 XTR can help reduce system costs by offering flexible system configurations, a compact footprint and multiple fieldbus support. An efficient and reliable solution for transportation, energy and process technologies, XTR provides the additional protection needed to defy climatic and mechanical forces at work in extreme conditions. 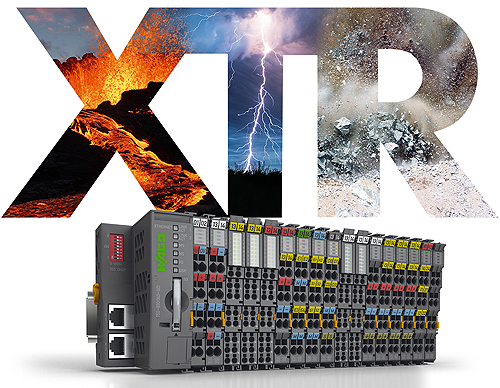 Extreme climate
Automation systems are increasingly being located in outdoor and remote locations where components are directly affected by widely fluctuating temperatures. With an operating temperature range of -40ºC to 70ºC, XTR is dependable in freezing cold, extreme heat and high humidity environments and has the ability to withstand short-term condensation according to IEC EN60721-3-3. These fundamental features allow control cabinets to be designed without heaters or air conditioning thus reducing energy consumption, system costs and enclosure dimensions.

Extreme vibration
Setting new standards with a vibration resistance of 5g and a shock resistance up to 25g per IEC 60068-2-27, the XTR can be engineered into equipment that has high levels of vibration and shock such as off-road heavy mobile equipment, or in rotating tools found in mining or tunnel boring machines.

Extreme isolation and protection
The WAGO-I/O-SYSTEM 750 XTR provides isolation of up to 5 kV impulse voltage. Reduced EMC interference emissions and increased resistance to interference from external components enable engineers to design XTR into high potential applications found in switch gear cabinets and substations. One programmable controller in the XTR line-up, the 750-880/040-001, is designed to support IEC 61850, the telecommunication protocol for smart grid systems.

Proven Technology
Built on proven technology, the XTR can be used as a distributed I/O system connected to a higher level controller via MODBUS TCP, EtherNet I/P, CANopen or PROFIBUS. It can also be used as a standalone system leveraging one of its programmable logic controllers’ powerful processors and extensive memory capabilities, programmed with WAGO’s site-licensed I/O-PRO software that supports all IEC 61131 languages including Ladder, Structured Text, Function Block and more.