Differences in NPT and NPTF threads lie in the major and minor diameters, as well as the root and crest of the threads. NPTF thread crests call within the same parameters as NPT requirements, but NPTF crests have a smaller range.

NPTF thread roots are designed to interfere with crest of the mating thread, which creates a mechanical 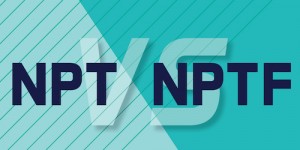 seal through thread form deformation at assembly, while NPT thread roots are designed to allow clearance with mating thread crests on assembly.

While NPT and NPTF are both designed to screw together, NPT requires a seal to be leak proof while NPTF do not. The L1 gauge requirements for NPT and NPTF differ for threads more than ½ in. in size, and thus, are not interchangeable. The difference lies in the Plug Gage Major Diameter and Ring Gage Minor Diameter.

But the most significant difference is the inspection required for each. With NPT, only a single plug with a step, an L1 plug for internal threads and a single thin L1 ring for external, are required to check size. For NTPF, additional threads in assembly, L2 and L3, and the major and minor diameters are inspected with either a special plug or ring gages.

The post What is the difference between NPT and NPTF? appeared first on Hose Assembly Tips.