Three executives from Japan loom large in a cramped courtroom in Seattle — at least their photos do, mounted on a white poster board propped in front of the jury.

“They were the key decision-makers,” one attorney said during opening arguments to a lawsuit brought by a local widow against a giant Tokyo-based medical device maker.

Theresa Bigler’s case is the first to go to trial in the U.S. stemming from a series of deadly superbug outbreaks across the country that were linked to contaminated medical scopes. She is suing Olympus Corp., claiming that one of its tainted devices caused the infection that led to her husband’s death in August 2013. The Olympus executives, her attorneys say, remained silent for too long about a design flaw that hindered cleaning of these reusable scopes.

The executives, however, will not be testifying. “Each is currently under criminal investigation and would potentially risk their freedom to attend,” Olympus said in a May 22 court filing. Each executive invoked his Fifth Amendment right against self-incrimination in depositions late last year in Tokyo.

Richard Bigler, 57, was one of at least 35 patients in American hospitals to have died since 2013 after developing infections tied to Olympus duodenoscopes — flexible, lighted tubes used to peer deep inside the body. More than 25 patients and families, from California to Pennsylvania, have sued Olympus alleging wrongful death, negligence, or fraud.

Several members of Bigler’s family testified this week, tearfully recalling how they thought the funny, affectionate husband, father and grandfather was beating pancreatic cancer diagnosed in late 2012 — then he contracted the infection. His wife told jurors Wednesday that he declined so rapidly, neither she nor her four children had a chance to say goodbye.

Only months later, when she read a newspaper account of an outbreak of drug-resistant infections blamed on the scopes, did she realize what had happened and confirm it with the Seattle hospital, Virginia Mason Medical Center, said Bigler, who lives in Woodway, outside Seattle. 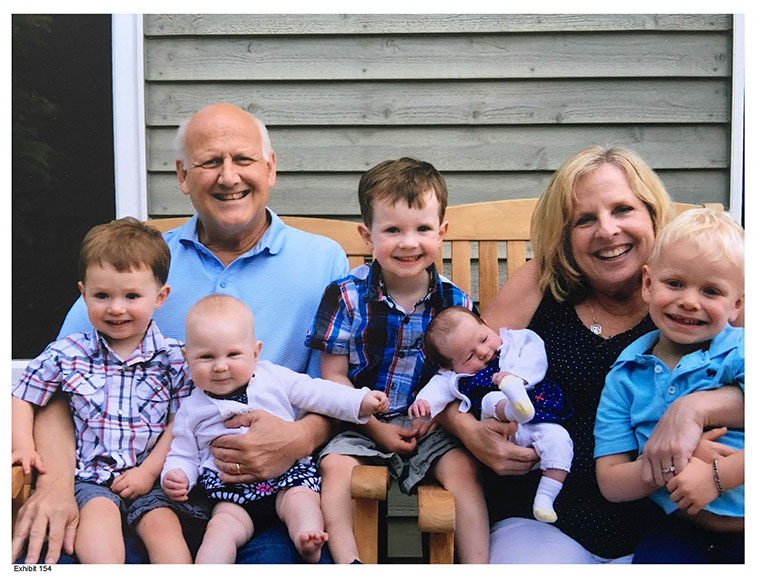 Richard and Theresa Bigler sit for a photo with their grandchildren in June 2013. Richard Bigler, 57, was one of at least 35 patients in American hospitals to have died since 2013 after developing infections tied to Olympus duodenoscopes. (Image credit: Kaiser Health News?Courtesy of the Bigler family)

The Seattle case may serve as a bellwether for future litigation. It also offers a preview of the evidence federal prosecutors in New Jersey could use against Olympus in a possible criminal case. Olympus said it’s cooperating with the prosecutors, who have declined to comment on their investigation.

In his opening argument in the Seattle courtroom, plaintiff’s attorney David Beninger said the company put sales ahead of safety to achieve market dominance. Olympus controls 85 percent of the U.S. market for gastrointestinal scopes.

At Virginia Mason Medical Center, 39 people were infected from contaminated Olympus scopes and 18 of them died. The Seattle hospital said the patients who died had other underlying illnesses. Bigler, a small-business owner who loved the outdoors, had been battling pancreatic cancer when he underwent a scope procedure in 2013.

Olympus attorney Mark Anderson defended the company’s scope as a medical breakthrough and cast blame on the hospital for failing to follow the company’s cleaning instructions.

“Mr. Bigler missed out on life events as a result of the care he got at that hospital. … There is an issue about whether they were properly cleaning these scopes. But no, the data doesn’t show that it is a product defect,” Anderson told the jury.

An investigation by federal, state and county officials concluded that Virginia Mason followed proper cleaning procedures. In an unusual strategy, the hospital and Bigler family have teamed up against Olympus at trial and both sides are seeking damages.

The hospital and the family have focused primarily on the executive pictured on the left of the plaintiffs’ poster board, Susumu Nishina.  He told the company’s U.S. managers in February 2013 not to issue a broad warning to American hospitals despite reports of scope-related infections in Dutch, French and U.S. hospitals, internal emails show. Those emails, introduced as evidence in the trial, were first reported in July 2016 by Kaiser Health News and the Los Angeles Times.

Nishina and the two other executives who declined to testify, Hisao Yabe and Hiroki Moriyama, hold top roles in regulatory affairs, quality assurance or medical manufacturing. All three have declined to comment.

An expert witness called to the stand last week testified that Olympus would have realized its scopes were defective if it had sufficiently tested its cleaning and disinfection process before putting the devices on the market in 2010.

“I found there was completely inadequate premarket validation testing. It was essentially nothing in my opinion,” William Rutala, an infection-control expert at the University of North Carolina, told the jury.

Rutala has served as an expert witness for Olympus in the past during litigation involving other types of scopes. He said that the company asked him twice to testify on its behalf for this trial but that he refused because of the company’s failure to ensure patient safety.

“I have been deceived. I thought there were meaningful data associated with [reprocessing] validation,” Rutala testified. “This device was intrinsically defective.”

Other documents released at the trial show that Olympus received a complaint from Virginia Mason as early as January 2011 about “patient debris” trapped inside the tip of the scope that was “extremely difficult” to remove. During the trial, a company official said there was no evidence of infection or other devices becoming contaminated so Olympus didn’t report the matter to federal regulators.

Outbreaks at European and U.S. hospitals started to occur soon after.

In 2012, after an outbreak at a Dutch hospital, an independent expert hired by Olympus and the hospital concluded in a report that the scope’s design could allow blood and tissue to become trapped, spreading bacteria from one patient to the next. The expert’s report called on Olympus to conduct a worldwide investigation and recall all of its scopes if similar problems turned up.

Nishina disputed many of the expert’s findings in his own 2012 report, released publicly for the first time as evidence in this case. The Olympus executive said the engineer’s report includes “many unscientific views, and isn’t valuable to be trusted.” Nishina said the expert has a “prejudiced imagination” and “the endoscope has been confirmed to be sufficiently reprocessable following the instruction manual,” according to the report.

MetroHealth system in Cleveland reported antibiotic-resistant bacteria in two patients after they were treated with an Olympus duodenoscope. A spokeswoman declined to provide details, citing patient confidentiality. Olympus also listed Cooper University Hospital in Camden, N.J., as having three infections at some point from 2010 to 2015. The hospital didn’t immediately respond to a request for comment.

By 2013, Olympus executives in the U.S. were complaining internally about Tokyo’s response to the infections, according to company documents filed in court. Some U.S. hospitals and clinics had asked about a safety alert the company issued to European customers that year.

“I was pushing [Olympus Japan] to take a position on this EU [European Union] action, but as you can see from my communications with [Japan], they feel that no universal communication is required,” Laura Storms, vice president of regulatory and clinical affairs in Center Valley, Pa., wrote in a Feb. 6, 2013, email to a U.S. colleague that was introduced as evidence.

“Therefore, it places us in an awkward position,” she added. “However, this is part of the bigger problem, in my viewpoint, of lack of leadership and direction from [Olympus Japan].”

With the Tokyo executives absent, however, Storms has been the company’s chief defender during several days on the witness stand. She emphasized that the company thoroughly investigated each report of contamination or infection and regularly sent company employees to hospitals to provide training and technical assistance.

But Beninger, the plaintiff’s attorney, pressed Storms as to why she didn’t tell doctors at Virginia Mason about previous outbreaks in the Netherlands, France, Germany, New York, Wisconsin, Massachusetts and Pennsylvania that had already been reported to the company.

“I told them we did have complaints,” Storms said.