Tiny, individual, flexible ribbons of crystalline phosphorus have been made by UCL researchers in a world first, and they could revolutionise electronics and fast-charging battery technology.

Since the isolation of 2-dimensional phosphorene, which is the phosphorus equivalent of graphene, in 2014, more than 100 theoretical studies have predicted that new and exciting properties could emerge by producing narrow ‘ribbons’ of this material. These properties could be extremely valuable to a range of industries.

In a study published today in Nature, researchers from UCL, the University of Bristol, Virginia Commonwealth and University and École Polytechnique Fédérale de Lausanne, describe how they formed quantities of high-quality ribbons of phosphorene from crystals of black phosphorous and lithium ions.

The ribbons form with a typical height of one atomic layer, widths of 4-50 nm and are up to 75 μm long. This aspect ratio is comparable to that of the cables spanning the Golden Gate Bridge’s two towers.

“By using advanced imaging methods, we’ve characterised the ribbons in great detail finding they are extremely flat, crystalline and unusually flexible. Most are only a single-layer of atoms thick but where the ribbon is formed of more than one layer of phosphorene, we have found seamless steps between 1-2-3-4 layers where the ribbon splits. This has not been seen before and each layer should have distinct electronic properties,” explained first author, Mitch Watts (UCL Physics & Astronomy).

While nanoribbons have been made from several materials such as graphene, the phosphorene nanoribbons produced here have a greater range of widths, heights, lengths and aspect ratios. Moreover, they can be produced at scale in a liquid that could then be used to apply them in volume at low cost for applications.

The team say that the predicted application areas include batteries, solar cells, thermoelectric devices for converting waste heat to electricity, photocatalysis, nanoelectronics and in quantum computing. What’s more, the emergence of exotic effects including novel magnetism, spin density waves and topological states have also been predicted. 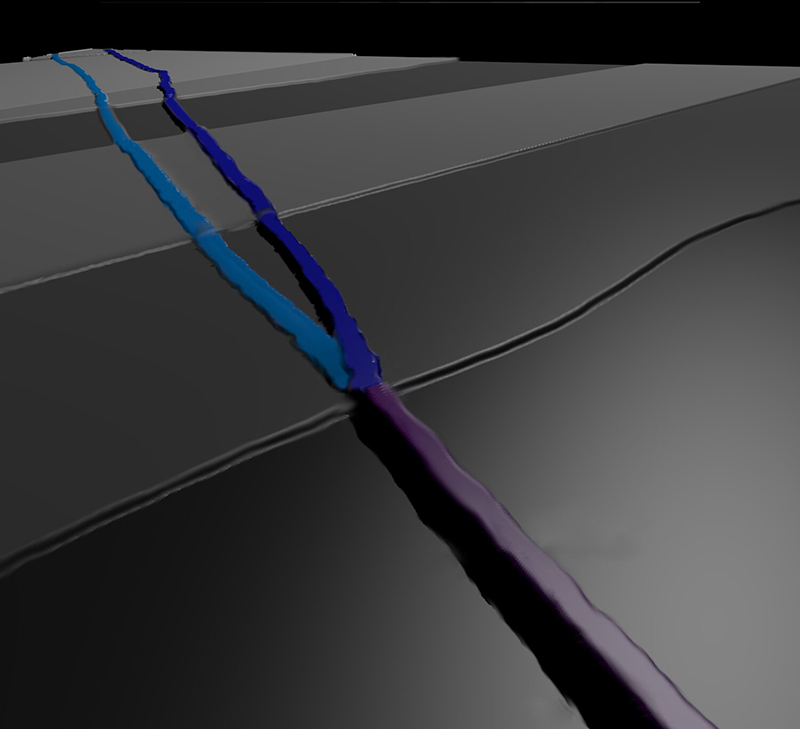 The nanoribbons are formed by mixing black phosphorus with lithium ions dissolved in liquid ammonia at -50 degrees C. After twenty-four hours, the ammonia is removed and replaced with an organic solvent which makes a solution of nanoribbons of mixed sizes.

“We were trying to make sheets of phosphorene so were very surprised to discover we’d made ribbons. For nanoribbons to have well defined properties, their widths must be uniform along their entire length, and we found this was exactly the case for our ribbons,” said Dr. Howard.

“At the same time as discovering the ribbons, our own tools for characterising their morphologies were rapidly evolving. The high-speed atomic force microscope that we built at the University of Bristol has the unique capabilities to map the nanoscale features of the ribbons over their macroscopic lengths,” explained co-author Dr. Loren Picco (VCU Physics).

“We could also assess the range of lengths, widths and thicknesses produced in great detail by imaging many hundreds of ribbons over large areas.”

While continuing to study the fundamental properties of the nanoribbons, the team intends to also explore their use in energy storage, electronic transport and thermoelectric devices through new global collaborations and by working with expert teams across UCL.