Nothing foretells the coming of winter like frost on windshields.

While the inconvenience of scraping or defrosting car windows may define cold mornings for many drivers, the toll frost takes on the larger economy is more than just a nuisance. From delayed flights to power outages, ice buildup can cost consumers and companies billions of dollars every year in lost efficiency and mechanical breakdown.

New research from Virginia Tech, published this week in ACS Applied Materials & Interfaces, hopes to change that. With the world’s first demonstration of a passive anti-frosting surface, the study provides a proof of concept for keeping surfaces 90 percent dry and frost free indefinitely—all without any chemicals or energy inputs.

“Frosting is a big issue, and researchers have been working to solve this problem for years,” said Farzad Ahmadi, a doctoral student in Virginia Tech’s Department of Biomedical Engineering and Mechanics in the College of Engineering and the study’s lead author.

Ahmadi explained that traditional approaches to fighting frost have relied on the application of antifreeze chemicals or energy inputs, like heat. Even the age-old method of throwing salt down on roadways is essentially a chemical treatment. Other recent advances include special coatings for surfaces that prevent frost formation, but these coatings aren’t durable and tend to wear off easily.

“For this project, we’re not using any kind of special coating, chemicals, or energy to overcome frost,” said Ahmadi. “Instead we’re using the unique chemistry of ice itself to prevent frost from forming.”

Using a simple approach to design, the researchers created their anti-frosting surface on untreated aluminum by patterning ice stripes onto a microscopic array of elevated grooves. The microscopic grooves act as sacrificial areas, where stripes of intentional ice form and create low pressure zones. These low-pressure areas pull nearby moisture from the air onto the nearest ice stripe, keeping the overlapping intermediate areas free of frost, even in humid, sub-freezing conditions. 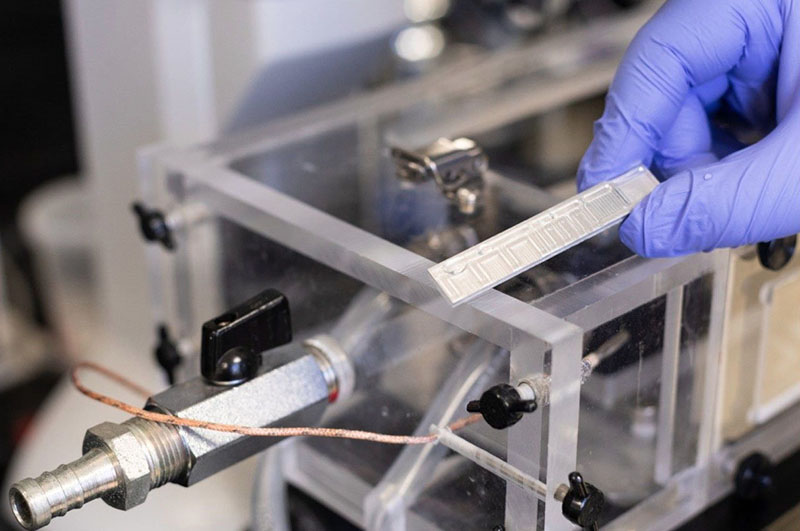 A scale model of the team’s anti-frosting technology applied to a small sheet of untreated aluminum. Elevated micro-fins of sacrificial ice allow the remainder of the surface area to stay dry and frost free. Credit: Virginia Tech

These sacrificial ice stripes make up only 10 percent of the material’s surface area, leaving the remaining 90 percent completely dry.

“The real power of this concept is that the ice stripes themselves are the chemistry, which means the material we use is irrelevant,” said Jonathan Boreyko, an assistant professor in the Department of Biomedical Engineering and Mechanics. “As long as you have that proper pattern of sacrificial ice, the material you use could be virtually anything. So there are a lot of possibilities.”

The researchers see immediate applications for the technology in the HVAC industry, where the outdoor components of heat exchangers (like heat pumps and fan systems) already utilize a pattern of micro-fins on their surfaces. Manufacturers would just need to apply the right pattern of grooves on those fins to keep frost from building up inside the systems.

Other applications include aerospace materials, like airplane wings. And yes, with a little more development, car windshields are also an option for the anti-frosting technology, which has already been granted a full patent.

In addition to its unprecedented anti-frosting qualities, the technology could carry additional benefits: It may help to offset traditional methods of fighting ice that carry troubling implications for the environment. For example, it takes thousands of gallons of antifreeze chemicals to defrost the wings of one airplane for a single flight. Those chemicals run off into groundwater, get dispersed into the air as tiny droplets, and may have lasting effects on vegetation and wildlife—even people.

“The good thing about ice is that it’s environmentally friendly,” said Ahmadi. “It’s not like other chemicals or even salt, which not only stick around but also get diluted or watered down over time.”

Boreyko said one of the study’s most important contributions was the development of a rational model for how much chemical (in this case, the chemical is ice) to apply in order to keep a surface dry.

“We’ve known the trick for centuries,” he said. “You put down a low-pressure chemical, like salt, and it keeps everything else around it pretty dry. But now we’re making that effect everlasting, and we’re making its distribution rational.”