Lithium-sulfur (Li-S) batteries are a relatively new variety of battery being studied and developed by researchers around the world. Because they have very high theoretical energy densities – storing more than five times as much energy in a smaller volume than the most state-of-the-art lithium-ion batteries – they are strong contenders for applications both small and large.

But before real-life applications can be realized, some performance issues must be addressed – namely, poor conductivity and inadequate energy efficiency. These glitches stem from the chemical species and reactions within the battery as charge is transferred via lithium atoms between the two battery electrodes and through the electrolyte that separates them. These problems may be remedied by adding conductive metal sulfides, such as copper sulfide (CuS), iron disulfide (FeS2), titanium disulfide (TiS2) and others to the battery’s sulfur electrode. However, unique and distinctive behaviors have been observed for each type of metal sulfide in the Li-S batteries. To understand the fundamental mechanisms of these different behaviors, scientists need to be able to closely study these complex reactions in real time as the battery discharges and charges, which is a challenge.

At the National Synchrotron Light Source II (NSLS-II), a U.S. Department of Energy (DOE) Office of Science User Facility at DOE’s Brookhaven National Laboratory, a group of researchers conducted a multi-technique X-ray study to learn more about the structural and chemical evolution of a metal sulfide additive – copper sulfide (CuS), in this case – as the lithium ions moved between the battery’s electrodes. Their work is an example of an operando study, an approach that allows researchers to gather structural and chemical information while, at the same time, take measurements of electrochemical activity. The group used a “multi-modal” approach involving a suite of X-ray techniques: X-ray powder diffraction to gather structural information, X-ray fluorescence imaging to visualize the changes in elemental distribution, and X-ray absorption spectroscopy to follow the chemical reactions.

The results, featured in the October 11, 2017, online edition of Scientific Reports, shine new light on the structural and chemical evolution of the system.

Among the choices of metal sulfide additives, CuS is favorable for a few reasons, including its high conductivity and energy density. In prior studies, the group found that adding CuS to a sulfur-only electrode enhances the battery’s discharge capacity because sulfur is a poor conductor and CuS is both more conductive and electrochemically active. However, when hybrid sulfur/CuS cathodes (the positive electrode) were used, Cu ions dissolved in the electrolyte and were ultimately deposited on the lithium anode (the negative electrode), destroying the interface layer between the anode and the electrolyte. This caused the cell to fail after just a few charge-discharge cycles.

“This observation represents a design challenge in multi-functional electrodes: while introducing new components with desirable properties, parasitic reactions may occur and hinder the original design intentions,” said Hong Gan, a scientist in Brookhaven’s Sustainable Energy Technologies Department and one of the paper’s corresponding authors. 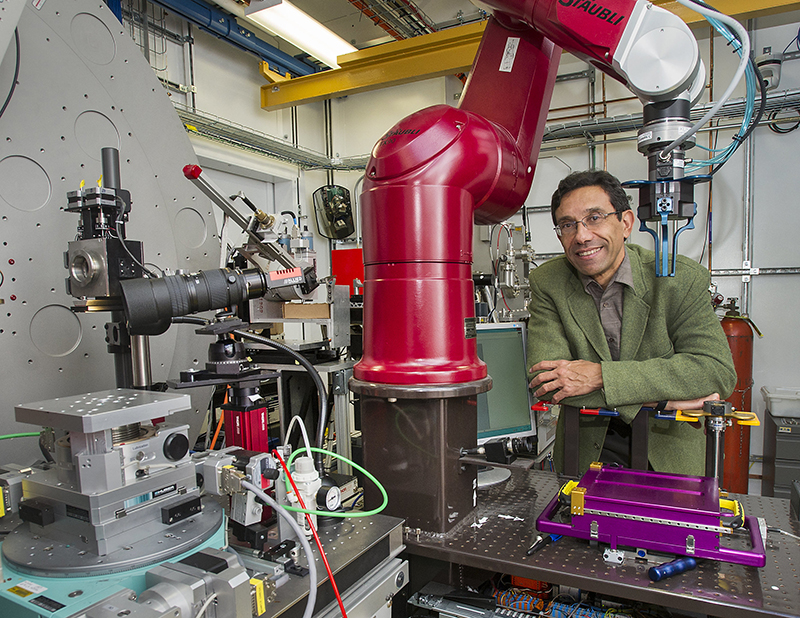 At the X-ray Powder Diffraction (XPD) beamline, the team worked with Eric Dooryhee to investigate the structural evolution of the hybrid electrode as it discharged. Credit: US Department of Energy

He continued, “To address the specific problems in the case of a Li-S battery with a CuS additive, as well as to guide the future design of electrodes, we need to better understand the evolution of these systems in every way we can: structurally, chemically, and morphologically.”

“We saw the need to develop a multi-modal approach that would not just study one aspect of the system evolution, but provide a more holistic view on many aspects of the system, using multiple complementary synchrotron techniques,” said the paper’s other corresponding author, Karen Chen-Wiegart, an assistant professor in Stony Brook University’s Materials Science and Chemical Engineering Department who also holds a joint appointment at NSLS-II.

To enable this, the group first designed a battery cell that is fully compatible with all three X-ray techniques and could be studied at three different X-ray beamlines at NSLS-II. Their design not only allows measurements to be conducted at both of the battery’s electrodes, but is optically transparent, enabling the researchers to perform in-line optical microscopy and alignment at the beamlines.

“These characteristics are critical, as they allow us to spatially resolve the reactions from different components and at multiple locations within the cell, which is one of our main research aims,” said Chen-Wiegart.

Moreover, as pointed out by team members Ke Sun (Brookhaven’s Sustainable Energy Technologies Department), Chonghang Zhao, and Cheng-Hung Lin (both from Stony Brook University), their versatile and simple design, using economical parts, allows many cells to be constructed for each synchrotron experiment, greatly facilitating their research. Sun, Zhao, and Lin together developed the multi-modal in-situ battery cells. Additionally, the team of scientists designed a multi-cell holder that allows to cycle several batteries simultaneously and measure them successively and continuously.

Such a comprehensive approach takes a team of researchers with expertise from different backgrounds. The scientists from Brookhaven’s Sustainable Energy Technologies Department and Stony Brook University collaborated closely with the scientists at NSLS-II. They worked with scientists Jianming Bai and Eric Dooryhee to use operando X-ray powder diffraction (XPD) to study the structural evolution of the hybrid electrode as it discharged. NSLS-II’s XPD beamline is an effective tool in studying battery reactions, including Li-S batteries, and it was used in this case to capture the timing of the reaction between the lithium and the CuS, relative to its reaction with sulfur. The XPD data also indicate that the reaction products are not crystalline, shown by the lack of diffraction peaks. 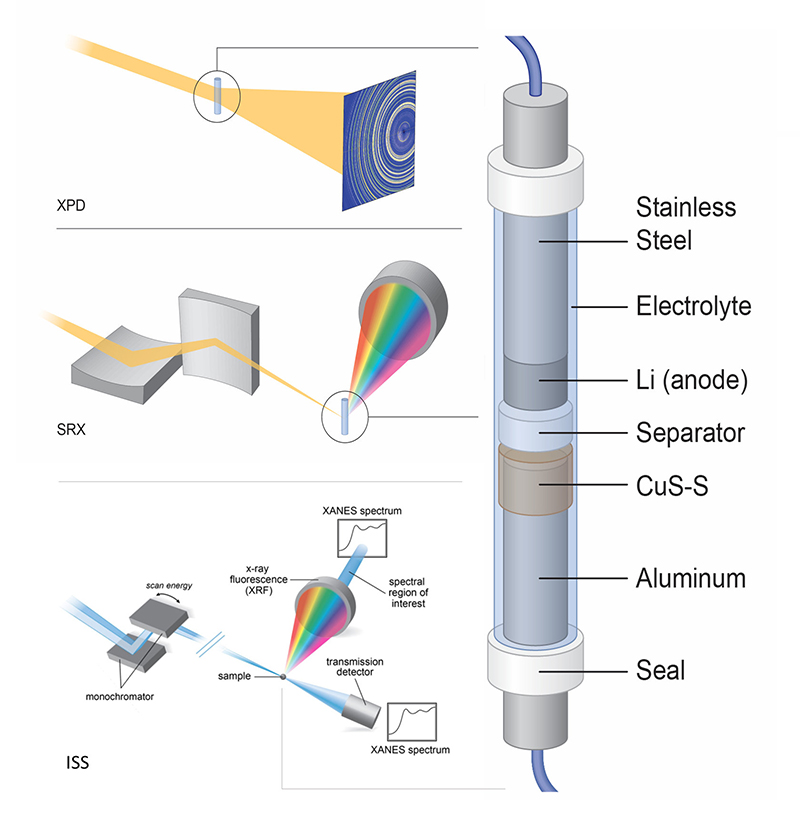 The scientists designed a Lithium-sulfur battery cell (right) that is fully compatible with all three x-ray techniques that the scientists used at the three different x-ray beamlines (left) to study the battery under working conditions. Credit: US Department of Energy

To learn more, the group turned to operando X-ray absorption spectroscopy (XAS), performed at the Inner Shell Spectroscopy (ISS) beamline, working with NSLS-II scientists Eli Stavitski and Klaus Attenkofer. The XAS data suggest that, after the battery has fully discharged, the CuS has been converted to a species with ratios of Cu and S somewhere between CuS and Cu2S. To further pinpoint the precise phase composition, the group will perform additional XAS studies in the future.

To visualize the dissolution of CuS and its subsequent re-deposition on the lithium anode, the scientists conducted operando X-ray fluorescence (XRF) microscopy at the Submicron Resolution X-ray Spectroscopy (SRX) beamline with the assistance of scientists Garth Williams and Juergen Thieme. XRF imaging identifies the elements in a sample by measuring the X-ray fluorescence emitted when the sample is excited by a primary X-ray source. In this case, it allowed the group to image the distribution of elements in the battery, as well as how and when that distribution evolved. This information could then be correlated with the chemical and structural evolution data obtained by the XPD and XAS studies.

Putting it all together

When the findings from each X-ray technique are reviewed in total, a picture forms – albeit a complex one – of the evolution of the sulfur-CuS hybrid electrode’s crystalline phase as well as how the CuS dissolves during cell discharge. During the first part of the discharge, the sulfur in the cathode is completely consumed, seemingly converted to soluble lithium polysulfides, such as LiS3, LiS4, and so on, up to LiS8. Next, the polysulfides are then converted to non-crystalline Li2S2, which is then further converted to crystalline Li2S. This lithiation of the sulfur stops towards the end of the full discharge mark. At that point, the lithiation of CuS begins, forming non-crystalline Cu/S species.

The CuS interacts strongly with some of the polysulfide species. Cu ions dissolve into the electrolyte, where they migrate from the cathode to the anode. On the anode surface, various copper species are deposited and, soon after, the cell fails.

The above work provides a clear mechanism about how sulfur and copper sulfide interact with each other inside a Li-S cell during discharge/charge cycling. The research team will apply the multi-modal synchrotron method developed in this work to study the cycling mechanism of other battery systems. The search for multifunctional conductive additives for Li-sulfur batteries will focus on other more stable transition metal sulfides, such as titanium disulfide (TiS2), which show no Ti ion dissolute in electrolyte during cell discharging/charging.