As a licensed architect concerned about the environment, Doris Sung became fed up catering to clients wanting steel and glass buildings with no regard to how such designs draw boatloads of energy, exacerbating global climate change.

So after 20 years, she quit the business and began focusing on building a better mousetrap. The result has been several prototypes using “smart building materials” that could revolutionize architecture, change the way buildings are constructed and ultimately reduce the building industry’s massive carbon footprint.

“I was concerned about climate change,” Sung, a Rolling Hills resident, began. “But in architecture, it just wasn’t happening. I kept thinking architecture is not doing anything to help this problem, so that’s why I left the field and moved into research.”

As a researcher and professor at USC’s School of Architecture for the past decade, Sung has been breaking down walls—literally.

Instead of using concrete and plate glass geared toward creating unobstructed views and not energy efficiency, why not make buildings with a “skin” like a human’s which automatically lets in just the right amount of light and energy a building needs and keeps out what it doesn’t, she thought.

After almost nine years of research trying out different materials and various software programs, one result was Sung’s InVert window shading system. Her private company, TBM Design, creates windows containing suspended thermo-bimetals which react to sunlight by turning at different angles and even flipping upside-down to either block out the sunlight or let more in—naturally heating or cooling the building’s interior.

The responsive window system reduces energy use, especially air conditioning which is often fueled by power plants that burn fossil fuels, by between 28 percent and 42 percent. The windows respond to the elements without using energy—no motors, controls or computer chips. The sun’s radiation prompts the motion.

Sung believes the use of smart materials can reduce the size of massive HVAC systems needed to heat and cool large buildings—a sea change in construction. Already, buildings use more energy than transportation. In California, greenhouse gas emissions from buildings represent 25% of the state’s total emissions, according to a study released this month by a San Francisco energy consulting firm.

“Dang, if we can even make the smallest change on a building envelope, then we’ve made a big leap,” she said.

In her laboratory at her Rolling Hills home on Tuesday, Sung demonstrated the window skin technology. Some describe the twisting, curling bimetals as tiny butterflies that flutter when hit with sunlight. Architectural publications have called her work a mixture of artistic and practical design.

The colorful bimetals, made of nickel, manganese and copper, are more like half moons, she said. They sit on pivots within the glass panes but are not attached, freely able to move in response to the sun. “They look like slivers but are elliptical shapes,” she said.

If these were installed in a 12-story building, air conditioning would be reduced by 15 percent, saving 360 metric tons of carbon dioxide, the main greenhouse gas contributing to global warming. “That’s like taking 78 cars off the road permanently. Or like planting 6,100 tree seedlings,” she said proudly.

In February, Sung and TBM Design chief financial officer, Karen Sabath, were finalists in the C40 Women4Climate Tech Challenge in Paris. Although they did not win, they placed in the top 10 out of more than 100 entries, Sung said.

In the lab, she also experiments with self-structuring smart materials that form when hit with sun or heat. She’s also working on self-assembling materials. Picture an IKEA table that puts itself together when exposed to light.

“It uses no hands, no tools, just using temperature to assemble it by itself,” she said, adding such an application is in the early stages. Manufacturing and assembly companies are curious because it would replace the need for expensive robots. NASA has also expressed interest.

“I get phone calls from NASA. Without humans, they could build something on the moon or on Mars,” she said. “You wouldn’t need a construction crew. You could just have one person bringing it out.” 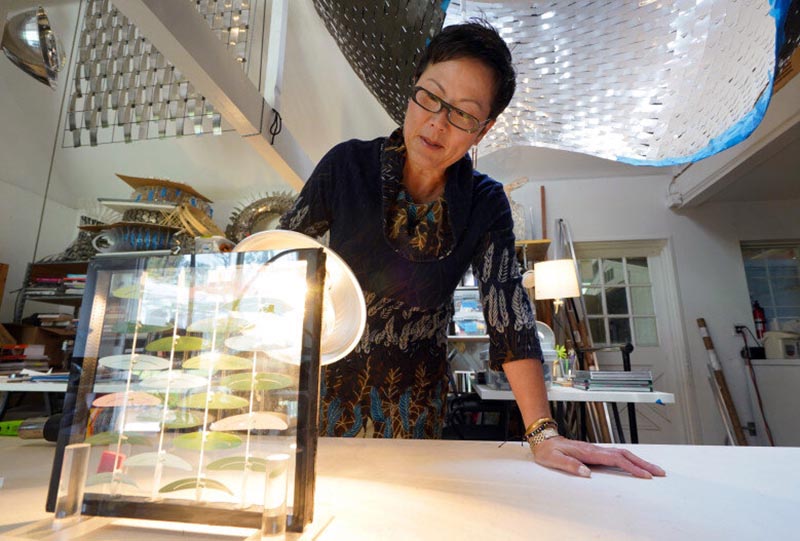 Doris Sung uses a heat lamp to cause a reaction and turn small metal pieces in her home studio in Rolling Hills on Tuesday, Apr. 16, 2019. Sung teaches and does research at USC School of Architecture and works with metals sandwiched between panes of glass that change shape when affected by the heat of the sun which can be used to cool a building. Credit: Scott Varley, Daily Breeze/SCNG

Sung admires Tesla CEO Elon Musk’s advances in electric cars. She said the Tesla electric cars and all EVs from other car companies are moving the automobile industry away from fossil fuels much quicker than the building industry.

“We are stuck with steel and glass, the same old thing,” which exposes a building to solar heat and increases energy use, she said. Moving new building materials into the marketplace has been fraught with resistance.

It’s not easy being green

“The fact is nobody wants to take a risk on new products. This fundamentally has to do with costs,” he said.

Then there’s the issue of change—sometimes new is not always palatable to the customer, Craig Foster, vice president of the Building Industry Association of Southern California said in an email.

“Once a new product is introduced into the marketplace, it is often difficult to get opportunities to present it as there is generally no existing track record or burden of proof regarding how the product will look once applied and how it will last over time.”

Sherman said it’s normal for any industry to be wary of change. He said developers do want to incorporate more sustainability into homes and offices, but it takes time.

Sung gets that. “We are trying to put new products on the market, but we are also trying to change the mind of the user.”