Envelope control is important because it provides the opportunity to make taller machines without the need to add excessive outreach and excessive weight. Without envelope control, the gross vehicle weight rating could possibly increase by more than 3-times the amount for large machines. Imagine trying to transport a machine weighing nearly 200,000 pounds!

With envelope control, not only will larger machines weigh less but permits will be easier to obtain if one is needed. Trailers and trucks to transport the machine will also be more readily available and less expensive. Other benefits include improved jobsite mobility for the machine and a reduction in the overall cost of the machine.

The working envelope of a boom lift includes all combinations of accessible height and outreach of the platform. These combinations directly influence the stability and strength requirements of the machine. 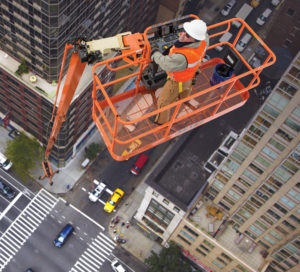 In 2014, JLG Industries, Inc. introduced the 1850SJ, the world’s tallest straight boom lift, with its envelope being controlled by sensors.

In some cases of boom lifts, as height increases the machine tends to become heavier, requiring a larger base to enable an increase in the working envelope of its reach. When designing a boom lift, vehicle weight is an important consideration because it affects manufacturing costs, vehicle maneuverability and safety factors. 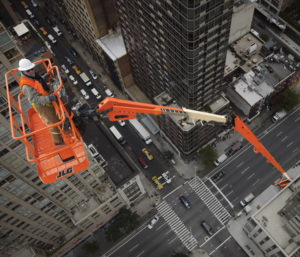 An envelope control system is the primary means of controlling the stability of the machine; it restricts the working envelope of the main boom. The envelope shape positions of stability and structural integrity can be controlled including the restriction of forward and rearward reach of the platform.

Envelopes that are limited electronically are more prevalent on larger models, especially those with a straight boom. The boom’s envelope is controlled electronically with sensors, whether they are length and angle sensors or load sensing devices. The sensors restrict the length of the boom based on its angle and vice versa.

A stable machine has the envelope control system as one of its most important attributes. While there is a complexity to understanding how the system works, it is necessary to bring awareness to this process and understand what the machine is doing and why.

A conventional straight boom lift typically includes a single telescopic boom that enables the platform to be positioned from low angles (usually below horizontal) to high angles (around 75-degrees above horizontal). When an angle is near horizontal, it creates a situation of forward instability where the machine may tip toward the platform due to the moment created by the platform load and boom assembly. Counterweight can be added to the tail of the vehicle turntable to counterbalance the destabilizing moment created by the boom and platform load. 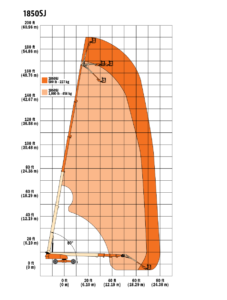 The working envelope of a boom lift includes all combinations of accessible height and outreach of the platform. These combinations directly influence the stability and strength requirements of the machine.

Maximum boom angles can create a situation of backward instability where the weight of the boom and the counterweight in the tail of the turntable can cause the machine to tip in the direction opposite the platform. Typically, counterweight added to the frames of the machines helps to counterbalance the destabilizing moment caused by the boom and tail counterweight. The total weight of the machine is dependent on the compromise made for the placement of weight required to satisfy both conditions of instability.

A single tower articulated boom lift typically includes two booms connected by an upright. This upright is held in a vertical orientation as the lower boom or tower is raised at an angle. Maintaining the upright in a vertical orientation is usually achieved by a hydraulic circuit or parallelogram linkage with the tower boom. The upper boom is pinned to the upright with its own lift cylinder, which can be raised or lowered in angle with a full range of motion regardless of the position of the tower boom.

The two booms can be independently positioned to allow the machine to be used for various work positions and articulated for up and over obstacles. The total maximum height of the platform is achieved by the contribution of the tower and upper boom lengths. Booms on an articulated lift are typically shorter than the boom of a comparable height straight lift. Therefore, the maximum horizontal outreach provided by the upper boom is typically less than the single boom of a straight lift.

A position of maximum forward instability for this type of boom is encountered when the tower is raised to its full angle with the upper boom near a horizontal angle. This creates the maximum horizontal outreach of the platform while also positioning the boom structure weight in the most detrimental position to the forward stability of the machine. Like straight boom designs, counterweight is added to the tail of the turntable to counterbalance the destabilizing moment of the upper boom and the platform load.

Likewise, the position of maximum backward instability occurs when the tower is lowered to a near horizontal angle while keeping the upper boom raised at the max angle. The weight of the boom structure has moved to the most detrimental position of backward stability and is made worse by the presence of the tail weight added to reduce forward instability. Frame counterweight is typically added to counterbalance the additional weight.

To accommodate for large overturning moments, the vehicle must include a large mass counterweight to stabilize the machine. However, large counterweights increase manufacturing costs and could have a detrimental effect on operating envelopes. For example, when a vehicle is operating on an incline, it may not perform to the same capabilities as if it were on a level surface. Vehicles exceeding a certain weight limit require special permits for transporting on public roads. This results in additional costs to the vehicle.

The two main boom angle sensors measure the angle of the main boom relative to gravity and are continuously monitored for mutual agreement. The main boom length sensor measures the length of the main boom and is monitored for response to the main telescope command and for agreement with the fixed position length switch.
Violations of the main boom position to allowable envelope positions will result in reduced function speeds, a boom control system (BCS) warning light illumination and restriction of functions. The platform alarm will sound and the BCS light will flash with attempts to operate restricted functions. The machine will be restricted from leaving the transport position until the failure is resolved.

Components, such as tires and engines, can be sized for the lower weight the system provides. The sensors and control systems used also provide the operator with smooth operation of the vehicle. The systems can additionally run diagnostic tests and enhance productivity.

With the addition of envelope control, a boom lift gains the advantage of multiple platform capacities on the same machine giving a user selectable envelopes based on the desired platform capacity ratings.