Opto 22 has announced groov version 2.2, a significant update to the company’s groov web-based mobile operator interface software. groov makes it simple to build and use effective, scalable operator interfaces on smartphones, tablets, and other mobile devices so that authorized users can monitor or control almost any automation system. groov 2.2 adds and improves dynamic screen objects (gadgets), expands real-time trending gadgets with multiple pens and data buffering, and makes several time-saving tool improvements to the screen-building and editing environment. groov 2.2 also improves the ability to customize separate screens for PCs and mobile devices in the same groov project, so the best interface is used for each size platform. groov lets industrial automation end-users, system integrators, machine OEMs, or any authorized person quickly and securely manage automation, building, and other control systems from a mobile device.

The groov Trend gadget has been significantly expanded to extend real-time trend durations to seven days and to use up to four pens per chart. Longer update rates allow users to build trends to meet their specific needs, and trended data is now buffered. This buffered data can survive a reset or power outage, ensuring no trend data is lost, which can be critical in applications or environments where viewing long data trends is vital. 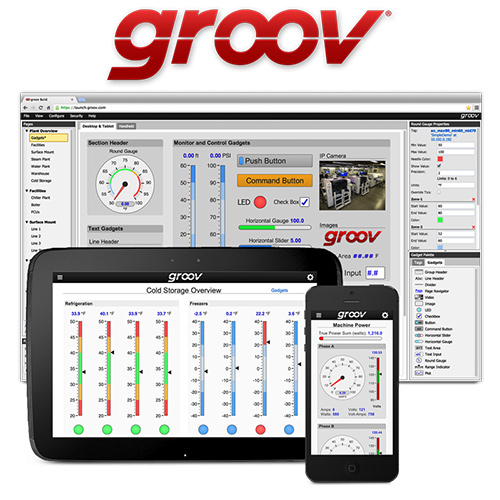 groov Build, groovâ€™s interface development tool, adds multiple new color backgrounds for screen design, including several dark backgrounds up to black. Darker backgrounds generally produce less glare when an interface is used in environments with dim lighting. Along with these new background choices, on-screen gadgets, text, and other objects now automatically change color for best visibility on the current background. This greatly speeds up interface development because the screen developer/designer can quickly test many different background colors without needing to change any on-screen objects.

Also in groov Build are improvements for editing objects and gadgets, including new sizing handles, easier selection of z-order (depth) for on-screen objects, and a new Edit menu that puts related commands in one place. Together, these improvements can reduce the time to build interfaces by up to 50%.

Custom Views for Mobile Devices
groov interfaces are used on many different devices, from compact, handheld smartphones to large wall-mounted TVs. When an operator interface is built in groov Build, two screens are created simultaneously: a larger screen intended for a PC or tablet, and a smaller screen for a smartphone or similar mobile device. Both large and small screens include the same objects and gadgets by default, and gadgets can be individually positioned and sized for best use on the large or small screen.

New in groov 2.2, objects and gadgets can be included in one size screen but omitted in the other. For example, a real-time trend can be included on the large PC/tablet screen but not on the smaller smartphone screen, customizing the operator interface for either size device. In another example, a large, horizontally-oriented graphic can appear on the large PC/tablet screen, while a smaller, vertically-oriented version of the same graphic appears on the smaller screen. This new feature provides a level of screen-building customization and utilization never before offered in an operator interface product.

“On” and “Off” values displayed in a Value gadget can be customized with labels like “Open” and “Closed” that may be more meaningful in specific applications.

When a new gadget is created, its label automatically uses the name of the tag to which it’s connected. This feature saves time when building screens.

What’s groov?
groov is a zero-programming, web-based way to build, deploy, and view effective, scalable operator interfaces to monitor and control systems and equipment using mobile devices and other computer-based systems. These operator interfaces can be viewed on almost any mobile device or computer regardless of its manufacturer, operating system, or screen size, including smartphones, tablets, PCs, and even smart high-definition televisions.

groov can augment existing human-machine interfaces (HMIs) and Supervisory Control and Data Acquisition (SCADA) systems by making important information available at any time and in any location. groov is available as either the standalone groov Box hardware appliance or the PC-based groov Server for Windows software.

groov uses a standard method of securely communicating with devices on the plant floor, including PLCs, DCSs, PACs, databases, and OPC-DA servers, called OPC Unified Architecture (OPC UA). A fully functional version of groov Server for Windows is available to download and try so you can see your own systemâ€™s data on a smartphone, tablet, or other mobile device. The groov free trial operates for two hours without a license and can be restarted if more time is required.
Pricing and Availability