Researchers have been pushing the capabilities of materials by carefully designing precise structures that exhibit abnormal properties that can control acoustic or optical waves. However, these metamaterials are constructed in fixed geometries, meaning their unique abilities are always fixed. Now, new 3D printed metamaterial developed by a team led by University of Southern California researchers can be remotely switched between active control and passive states.

USC Viterbi School of Engineering Assistant Professor Qiming Wang and Ph.D. student Kun-Hao Yu, along with MIT Professor Nicholas Fang and University of Missouri Professor Guoliang Huang, have developed 3D printed metamaterials capable of blocking sound waves and mechanical vibrations. Unlike current metamaterials, these can be turned on or off remotely using a magnetic field. Their materials can be used for noise cancellation, vibration control and sonic cloaking, which can be used to hide objects from acoustic waves.

“When you fabricate a structure, the geometry cannot be changed, which means the property is fixed. The idea here is, we can design something very flexible so that you can change it using external controls,” said Wang, an assistant professor of civil and environmental engineering.

Metamaterials can be used to manipulate wave phenomena such as radar, sound and light and have been used to develop technology such as cloaking devices and improved communication systems. The team’s metamaterials are able to control environmental sounds and structural vibrations, which have similar waveforms. By 3-D printing a deformable material containing iron particles in a lattice structure, their metamaterials can be compressed using a magnetic field.

The magnetic field compresses the material, but unlike a physical contact force like a metal plate, the material is not constrained. Therefore, when an acoustic or mechanical wave contacts the material, it perturbs it, generating the unique properties that block sound waves and mechanical vibrations of certain frequencies from passing through.

The mechanism relies on the abnormal properties of their metamaterials — negative modulus and negative density. In everyday materials, these are both positive.

“Material with a negative modulus or negative density can trap sounds or vibrations within the structure through local resonances so that they cannot transfer through it,” Yu said.

Typically, when you push on an object, it pushes back against you. In contrast, objects with a negative modulus attract you, pulling you towards them as you push. Objects exhibiting a negative density work in a similarly contradictory way. When you push these objects away from you, they instead move toward you.

One negative property, either negative modulus or negative density, can work independently to block noise and stop vibrations within certain frequency regimes. However, when working together, the noise or vibration can pass through again. The team is able to maintain versatile control over the metamaterial, switching among double-positive (sound passing), single-negative (sound blocking), and double-negative (sound passing) just by switching the magnetic field.

“This is the first time researchers have demonstrated reversible switching among these three phases using remote stimuli,” Wang said.

Wang believes they may be able to demonstrate another unique property called negative refraction, in which a wave goes through the material and comes back in at an unnatural angle, which according to Wang is, “anti-physics.” They plan to study this phenomenon further once they are able to fabricate larger structures.

“We want to scale down or scale up our fabrication system,” Wang said. “This would give us more opportunity to work on a larger range of wavelengths.” 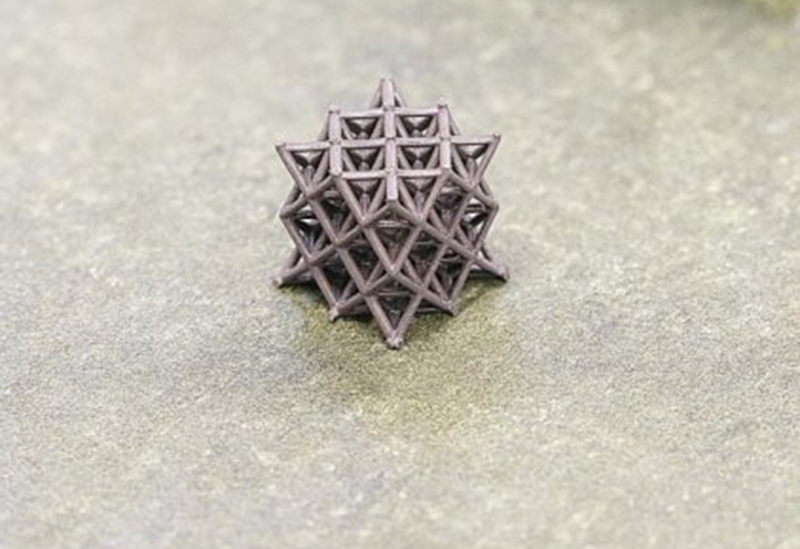 This is a sample of the 3-D printed acoustic metamaterial. Credit: Qiming Wang