Firefighters have one of the most dangerous and demanding jobs in the public’s eye. They are called upon to face complex fires or natural disasters to save lives or property. Innovative technology to help protect people and property is in high demand from firefighting forces around the world. This urgent demand led Crash Rescue Equipment to team up with Helac Corp. to design a telescoping nozzle on fire trucks that allows the nozzle to penetrate composite fibers and be placed inside small door openings or other restricted areas.

“Our Snozzle is a quick attack tool that can penetrate all current building, aircraft, automobile or train container materials including composite panels. By using Helac’s hydraulic rotary actuator to position our piercing nozzle, we can quickly penetrate and maneuver into tight spaces in a variety of aviation and municipal applications,” stated Grady North, chief engineer for Crash Rescue Equipment.

To get to a fire, firefighters often must
break their way through a building or structure. Special crash rescue
trucks, like this Panther, rely on the Snozzle quick attack tool to
penetrate building, aircraft, automobile or train container materials
including composite panels.

Better load management
Before the rotary actuator, Crash Rescue Equipment used two electric motors to position the piercing and water volume nozzles on the telescopic booms found on fire trucks. When the object was pierced, a load was also put on the water volume nozzle, taxing the motors.

Another issue involved mounting. Aluminum castings were used to mount the dual motor nozzle assembly, often causing the castings to break under too much torque or load. The rotary actuators, however, are mounted directly onto the telescopic boom to become a structural part of the boom for increased durability and reliability.

A look inside
It’s the operating technology that makes the hydraulic rotary actuator unique, and offers a powerful combination of features – high torque and moment loads, high angles of rotation, and compact configurations.

Sliding-spline operating technology replaces multiple components and functions as a rotating device, mounting bracket and bearing, all-in-one. This innovation converts linear piston motion into powerful shaft rotation. Each actuator is composed of two moving parts – the central shaft and piston. Helical spline teeth on the shaft engage matching teeth on the piston’s inside diameter. A second set of helical splines on the piston’s outside diameter mesh with the gear in the housing. When hydraulic pressure is applied to the piston, it moves axially, while the helical gearing causes the piston and shaft to rotate simultaneously.

A hydraulic rotary actuator controls the
telescoping nozzle through its 180º of motion.  The actuator also
handles high torque and moment loads, as well as high angles of
rotation.

Researching choices
Crash Rescue Equipment looked into several electric positioning alternatives before proceeding with a hydraulic rotary actuator. They wanted to avoid adding hydraulic lines to the internal electrical flex tube if at all feasible.

They began their search with electric linear cylinders, yet quickly discovered that the geometry wouldn’t fit the application and that the cylinders also needed a much higher degree of rotation. Additionally, cylinders have external rods and linkages that would increase the maintenance costs associated with particle contamination to the electric circuitry.

Electric motors were also researched. This possibility failed to offer the torque requirements or mounting strength needed for the piercing nozzle application.

The selected rotary actuator provided the engineers with compact configurations, 180º of smooth rotation, and a durable, enclosed envelope without any external moving parts. It also offered torque output to 740,000 in.-lbs, even though only 4,200 in.-lbs of torque were needed to operate the piercing nozzle.

The L20-4.5-180° rotary actuator was mounted directly onto the boom. Because of the actuator’s high radial and torque capacity, auxiliary bearings are not needed. All external forces are supported solely by the actuator.

“We saved money internally by using the actuator instead of an alternative electric positioning device, even with the addition of the hydraulic lines in the electrical flex tube. More importantly, we were able to offer the same product at the same price point with added capacity,” states North.

Advantages
According to North, there are three significant benefits with rotary actuators. “The rugged design of the entire unit resulted in higher torque output and holding loads, and the compact configuration made it possible for the actuator to fit on the end of the boom,” says North. “Plus, it was more cost effective than other rotary devices that we had researched.”

In addition, the actuator allowed them to sell their Snozzle product into more applications in the municipal and aviation markets. The increased capacity of the piercing nozzle to
penetrate tougher fiber materials will help the company diversify into these new markets with no additional cost to their customers.

“We’ve recently received customer requests to rotate the piercing nozzle 270º instead of 180,” states North. “Another attractive feature of Helac’s rotary actuators is their ability to rotate up to 360º.”

In the rotary actuator, sliding-splines
replace multiple components and functions for an all-in-one rotating
device, mounting bracket and bearing. This innovation converts linear
piston motion into powerful shaft rotation. Plus, the actuators offer
torque output up to 740,000 in.-lbs.

On the job
When a Federal Express MD-10’s landing gear collapsed in December 2003 and the plane caught fire and skidded off the side of the runway, a Snozzle piercing nozzle was used to douse the fire. The firefighters had to contend with winds of 15 to 25 knots, gusting to 30, yet the piercing nozzle allowed them to penetrate the fuselage and a cargo can and spray foam inside. The main body of the fire, which destroyed the right wing, was under control in 15 minutes of the ARFF crews’ arrival. The entire flight crew was saved including 99 percent of the 18,000 pounds of cargo, half of which was U.S. mail. This was one of the first times firefighters had been able to stop a FedEx plane in an accident from burning up.

In another example, firefighters from 8 Wing Trenton used a high tech firefighting truck with a Snozzle to douse a fire at a plastics factory in Cobourg, Ontario in April 2005.  The “Red-10” crash truck, normally used for aircraft crashes or fires, helped bring the potentially toxic plume under control with the help of 100 firefighters and 14 departments. “Our job was to cool down the plastic because we were the only ones with the kind of truck that could do that,” recalls 8 Wing firefigher, Corporal Stephane Charest. The cooperation between the military and civilian firefighters turned a potentially deadly situation into a manageable emergency with no loss of life.

Crash Rescue Equipment and Helac Corporation will continue to work together to develop
innovative technologies that can be used to protect people and property and to provide
firefighters with a powerful tool.

Filed Under: Actuators, Off highway • construction
Tagged With: helac 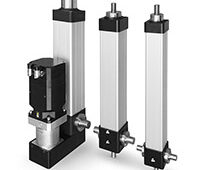 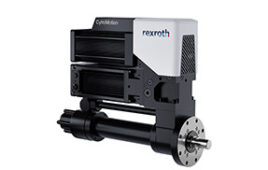 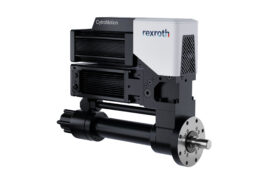 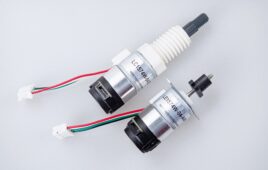