Medical marijuana has been legal in Maine for almost 20 years. But Farmington physician Jean Antonucci says she continues to feel unprepared when counseling sick patients about whether the drug could benefit them.

Will it help my glaucoma? Or my chronic pain? My chemotherapy’s making me nauseous, and nothing’s helped. Is cannabis the solution? Patients hope Antonucci, 62, can answer those questions. But she ays she is still “completely in the dark.”

Antonucci doesn’t know whether marijuana is the right way to treat an ailment, what amount is an appropriate dose, or whether a patient should smoke it, eat it, rub it through an oil, or vaporize it. Like most doctors, she was never trained to have these discussions. And, because the topic still is not usually covered in medical school, seasoned doctors, as well as younger ones, often consider themselves ill-equipped.

Even though she tries to keep up with the scientific literature, Antonucci says, “it’s very difficult to support patients but not know what you’re saying.”

As the number of states allowing medical marijuana grows — the total has reached 25 plus the District of Columbia — some are working to address this knowledge gap with physician training programs. States are beginning to require doctors to take continuing medical education courses that detail how marijuana interacts with the nervous system and other medications, as well as its side effects. 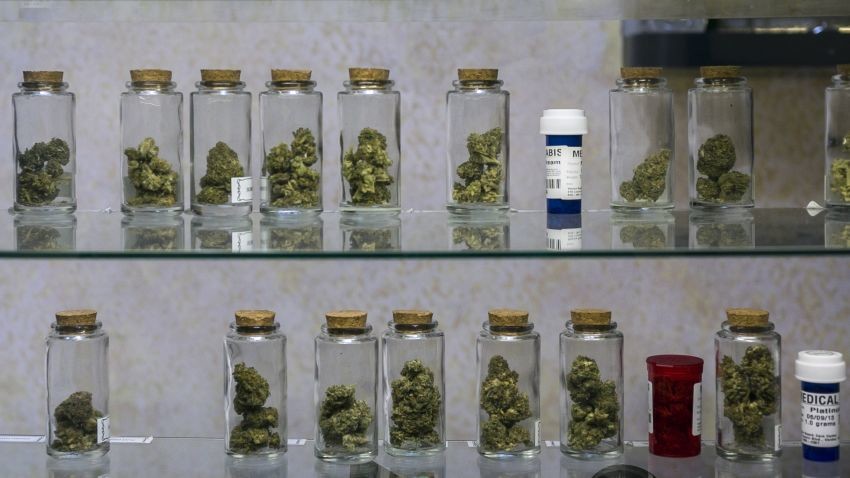 Though laws vary, they have common themes. They usually set up a process by which states establish marijuana dispensaries, where patients with qualifying medical conditions can obtain the drug. The conditions are specified on a state-approved list. And the role of doctors is often to certify that patients have one of those ailments. But many say that, without knowing cannabis’ health effects, even writing a certification makes them uncomfortable.

“We just don’t know what we don’t know. And that’s a concern,” says Wanda Filer, president of the American Academy of Family Physicians and a practicing doctor in Pennsylvania.

This medical uncertainty is complicated by confusion over how to navigate often contradictory laws. While states generally involve physicians in the process by which patients obtain marijuana, national drug policies have traditionally had a chilling effect on these conversations.

The Federation of State Medical Boards has tried to add clarity. In an Aug. 9 JAMA editorial, leaders noted that federal law technically prohibits prescribing marijuana, and tasks states that allow it for medical use to “implement strong and effective … enforcement systems to address any threat those laws could pose to public safety, public health, and other interests.” If state regulation is deemed insufficient, the federal government can step in.

That’s why many doctors say they feel caught in the middle, not completely sure of where the line is now drawn between legal medical practice and what could get them in trouble.

In New York, which legalized marijuana for medicinal purposes in 2014, the state health department rolled out a certification program last October. (The state’s medical marijuana program itself launched in January 2016.) The course, which lasts about four hours and costs $249, is part of a larger physician registration process. So far, the state estimates 656 physicians have completed the required steps. Other states have contacted New York’s Department of Health to learn how the training works.

Pennsylvania and Ohio are also developing similar programs. Meanwhile in Massachusetts, doctors who wish to participate in the state medical marijuana program are required to take courses approved by the American Medical Association. Maryland doesn’t require training but encourages it through its Medical Cannabis Commission website, a policy also followed in some other states.

But some advocates worry that doctors may find these requirements onerous and opt out, which would in turn thwart patients’ access to the now-legal therapy, says Ellen Smith, a board member of the U.S. Pain Foundation, which favors expanded access to medical cannabis.

Education is essential, given the complexity of how marijuana interacts with the body and how little physicians know, says Stephen Corn, an associate professor of anesthesiology, perioperative and pain medicine at Harvard Medical School. Corn also co-founded The Answer Page, a medical information website that provides educational content to the New York program, as well as a similar Florida initiative. The company, one of a few groups to offer teachings on medical marijuana, is also bidding to supply information for the Pennsylvania program, Corn said.

“You need a multi-hour course to learn where the medical cannabis works within the body,” Corn says. “As a patient, would you want a doctor blindly recommending something without knowing how it’s going to interact with your other medications? What to expect from it? What not to expect?”

But many say the science is too weak to answer these questions.

One reason: the federal Drug Enforcement Agency classifies marijuana as a schedule I drug, the same level as heroin. This classification makes it more difficult for researchers to gain access to the drug and to gain approval for human subjects to participate in studies. The White House rejected a petition this past week to reclassify the drug in a less strict category, though federal authorities say they will start letting more facilities grow marijuana for the purpose of research. (Currently, only the University of Mississippi can produce it, which advocates say limits study.)

From a medical standpoint, the lack of information is troubling, Filer says.

“Typically, when we’re going to prescribe something, you’ve got data that shows safety and efficacy,” she says. With marijuana, the body of research doesn’t match what many doctors are used to for prescription drugs.

Still, Corn says, doctors appear pleased with the state training sessions. More than 80 percent of New York doctors who have taken his course said they changed their practice in response to what they learned.

But even now, whenever Corn speaks with doctors about medical marijuana, people ask him how they can learn more about the drug’s medical properties and about legal risks. Those two concerns, he says, likely reduce the number of doctors comfortable with and willing to discuss marijuana’s place in medicine, even if it’s allowed in their states.

Though others say this circumstance is starting to ease, doctors like Jean Antonucci in Maine continue to struggle to figure out how marijuana can fit into safe and compassionate medicine. “You just try and be careful — and learn as much as you can about a patient, and try to do no harm,” she says.

This article was produced by Kaiser Health News and also appeared in USA Today.