The broadband and information and communications technologies (ICT) sector has stimulated the U.S. economy significantly over the last decade, according to a new report from the Internet Innovation Alliance, but the FCC’s efforts to impose Title II regulation on service providers could “adversely affect broadband/ICT sector investment, with potentially significant secondary costs for the other industries that depend on it and the overall American economy.”

“The large economic gains associated with the broadband and ICT sector have flourished in an environment of light federal regulation,” the report’s authors Kevin A. Hassett and Robert J. Shapiro argue. “The FCC’s proposed regulation of broadband ISPs and their service offerings would stifle broadband/ICT sector investment, growth and employment, negatively impacting the American economy.”

“The Impact of Broadband and Related Information and Communications Technologies on the American Economy” paper concludes that in 2014, the U.S. broadband/ICT sector produced $1,019.2 billion in value added for the American economy, equal to 5.9 percent of U.S. GDP of $17,420.7 billion in 2014.

“This substantial share of all U.S. economic value added has been roughly stable for the past decade and likely understates the sector’s full contribution by undervaluing technological improvements,” the report says.

“Unnecessary price regulation in competitive broadband markets will have far-reaching negative impacts on U.S. economic growth and development,” Rick Boucher says. He’s a former Democratic congressman who chaired the Energy and Commerce Subcommittee on Communications and the Internet, and now serves as honorary chairman of the IIA.

“Without ample investment in modern networks, consumers and the entire broadband ecosystem – from ISPs to edge providers – will suffer from reduced innovation and fewer cutting edge broadband services, as well as reduced jobs and economic growth in the nation’s Internet economy,” Boucher adds.

The report is available here. 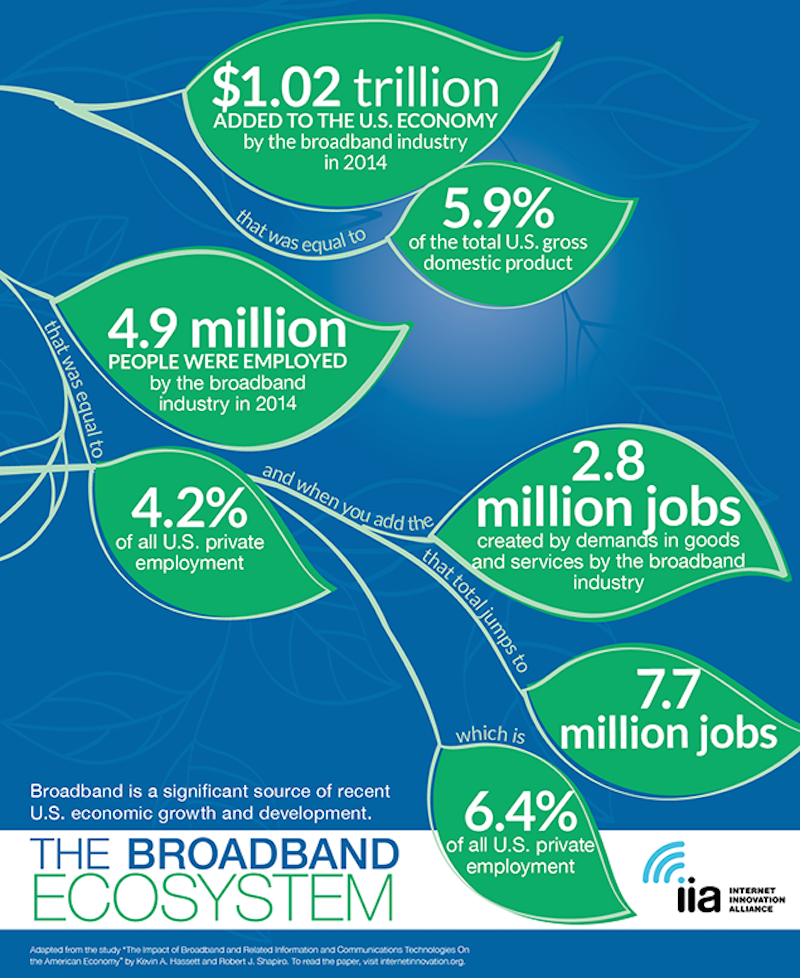