Some things are more sustainable than others. Crude oil can take millions of years to form under the Earth’s natural processes, while limestone has a shorter turnaround time of about 10,000 years. But in a society that burns through materials quickly, 10,000 years can hardly be considered a reasonable time to replenish something we’re using in, say, the production of plastics.

A solution has come from a most unexpected place—the crystal blue waters off the Bahamas. Calcean has begun to produce a substance, calcium carbonate (CaCO3), that can replace a portion of plastic resin—providing strength, cost savings and an environmental advantage.

Calcium carbonate is a colorless or white crystalline compound found throughout the world. Its most common natural forms are chalk, limestone, and marble—produced by the sedimentation of the shells of small fossilized snails, shellfish and coral over millions of years. It is commonly used medicinally as a calcium supplement, as well as a popular additive in a variety of manufactured products, including commercial chalk, cement, paper and plastics. 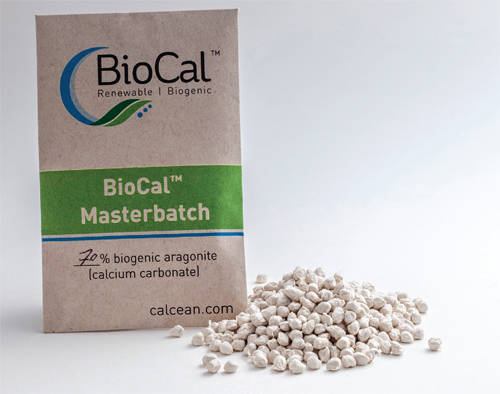 Oolitic aragonite sand (biogenic CaCO3) is one of the world’s purest forms of the ocean’s naturally precipitated calcium carbonate. It has a crystalline morphology of orthorhombic, bipyramidal characteristically needle-shaped crystals. The acicular needle-shape has a high aspect ratio, giving aragonite its strong practical advantages.

But instead of having to wait thousands or millions of years for this substance to be created, a much faster process is involved.

The phenomenon through which oolitic aragonite is formed is described as “Whitings.” Thought to be schools of fish disturbing the sandy bottom of the Bahama banks, Whitings are actually epicellular precipitation of calcium carbonate induced by photosynthesis in blooms of picoplankton, predominantly cyanobacteria, that seasonally enter the shallow waters throughout the Bahamas. This photosynthesis and calcification process sequesters tens of thousands of tons of CO2 from our environment. Oolitic aragonite not only makes a cleaner environment in its generative process, but also has the potential to help clean up the environment through its use in various industries.

This biogeochemical cycling of carbon in microbial precipitations of aragonite (biogenic CaCO3) replenishes at a rate of more than four billion pounds per year.

Using the company’s BioCal product in place of traditional resin (as much as 50% can be substituted) increases density and stiffness of a plastic, increases heat deflection, and increases down-gauge potential. Some of the uses include extrusion, thermoforming, injection molding, cast film and even blow molding.