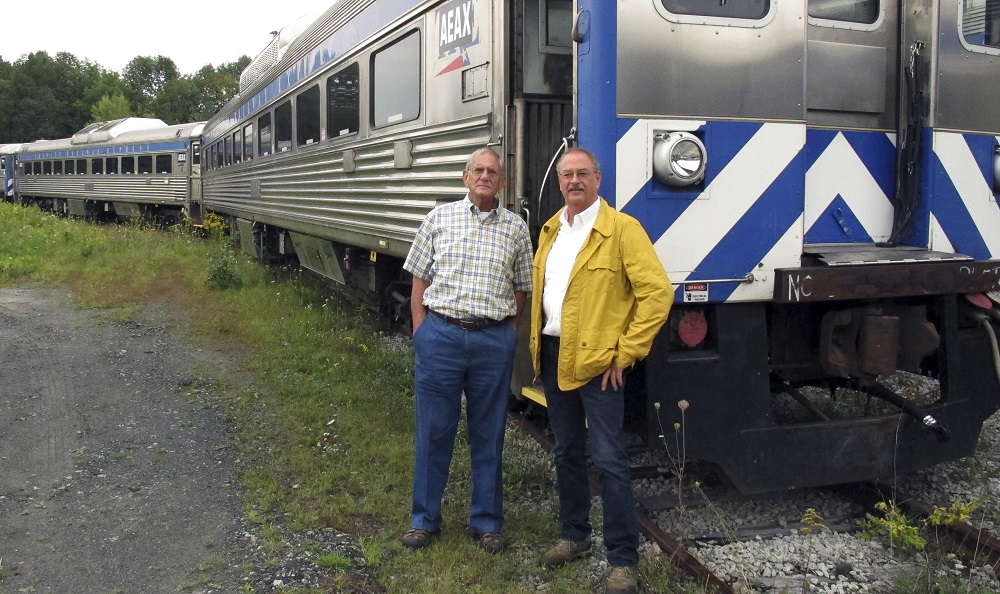 In this Sept. 5, 2017 photo, David Blittersdorf, right, and Charlie Moore pose in Barre, Vt., in front of one of a dozen passenger rail cars Blittersdorf bought to try to jump-start a commuter rail system in Vermont. Moore, a long-time rail expert in the state, is working to make that happen. Image credit: AP Photo/Wilson Ring

An energy entrepreneur wants to set up a commuter rail system to further his vision of weaning Vermont from fossil fuels and getting cars off the highways, and he has taken the first step toward moving it beyond the theoretical by buying a dozen rail cars.

David Blittersdorf spent $5 million of his own money to buy the fully functional, 1950s-era cars, and he has hired one of the state’s most experienced rail experts to get those cars carrying passengers once again.

This is a state where traffic jams are tiny by big-city measures and people are accustomed to driving long distances to work. But Vermont is also committed to reducing its carbon footprint; the official state goal is to get 90 percent of the state’s energy, including transportation, from renewable sources by 2050.

Blittersdorf maintains many young people now don’t want to be tied to their vehicles, as their parents have been. He hopes to set up a public-private partnership that could run a commuter rail system with the cars he bought. He would like to see at least some of the cars carrying the first paying passengers in a year or so.

He hired out of retirement Charlie Moore, a 40-year veteran of the Vermont rail industry, to be president of his company AllEarth Rail, to work out the details. They are working to identify a first route, but possibilities are from Burlington, the state’s largest city, to Vergennes or Middlebury, communities to the south. Or between Essex Junction, just outside of Burlington, and Montpelier, the state capital.

Ultimately, he believes, the state’s job centers could be connected by rail.

It wouldn’t be Vermont’s first attempt at a modern commuter rail system. In the late 1990s, former Democratic Gov. Howard Dean conceived of what became the Champlain Flyer, a commuter train that ran a 13-mile route between Burlington and Charlotte.

After millions of dollars in infrastructure and track upgrades, including the construction of new train stations in Charlotte and Shelburne, the Champlain Flyer ran for just over two years. It never attracted the ridership it needed and was canceled in early 2003 by Dean’s successor, Republican Gov. Jim Douglas, shortly after Douglas took office.

But the improvements did result in the upgrading of the rail lines south of Burlington. It would take little to bring the train stations back into service.

Dean said that his idea wasn’t financially viable at the time, but that he’s not sorry he tried.

Vermont transportation officials are intrigued by Blittersdorf’s idea, but they want to hear more.

“We support all modes of transportation,” said Dan Delabruere, the rail program manager for the Vermont Agency of Transportation. “We are always open to different ideas; we don’t just know enough about this idea yet.”

Blittersdorf, 60, has spent his professional life in the renewable energy world. Shortly after graduation from the University of Vermont with an engineering degree, he founded NRG Systems, a company that makes products used to measure wind energy. After selling it, he founded AllEarth Renewables, which makes devices that allow solar panels to follow the sun across the sky.

He is majority owner of Georgia Mountain Wind, a four-turbine industrial wind project just north of Burlington, and is working to develop other wind-energy and solar projects.

Blittersdorf this year bought a dozen self-propelled rail diesel cars built by the Budd Co. of Philadelphia between 1949 and 1962. The cars, completely refurbished not long before he bought them, get 2.5 miles per gallon of diesel fuel; can carry, with standing passengers, almost 140 people; and can hit 85 mph, well above the 59 mph maximum on Vermont’s top railroads.

Blittersdorf thinks it could be done for significantly less than the $310 million to $363 million estimate found by a commuter rail study completed this year for the Vermont Legislature.

Blittersdorf called the study a “gold-plated consultant’s report” that included spending between $162 million and $189 million on rail cars and $48 million for the construction of six new train stations. He has already bought the cars, he thinks existing train stations could work, and he is eager to work out other details with the railroads and the state.

Nancy Erickson commutes 62 miles each way from her home in Marshfield to her job with the Health Department in Burlington. Since she began work there in 1983, she has moved from carpooling to van pooling to taking a bus from Montpelier to Burlington.

“I love where I live, and I love my job, so that’s what I do,” Erickson said. “I would definitely love a train, particularly in the wintertime.”