MAGMA was designed and developed in collaboration by researchers at the University of Manchester and engineers from BAE Systems. Just recently, their two ‘flap-free’ technologies were successfully tested at the Llanbedr Airfield.

The researchers demonstrated a few features when testing their aircraft. First they showed off their Wing Circulation Control, which consists of taking air from the aircraft engine and blowing it supersonically through narrow slots around a specially shaped wing tailing edge in order to control the aircraft. Next, they demonstrated Fluidic Thrust Vectoring, which controls the aircraft by blowing air jets inside the nozzle to deflect the exhaust jet and generate a control force.

The technologies improved the control and performance of the aircraft. By replacing moving surfaces with a “blown air” solution, they have shown how engineers can create better performing UAVs that are lighter, more reliable, and cheaper. Additionally, these technologies could be instrumental in an aircraft’s stealth since the technologies reduce the number of gaps and edges that currently make aircrafts observable on radar. 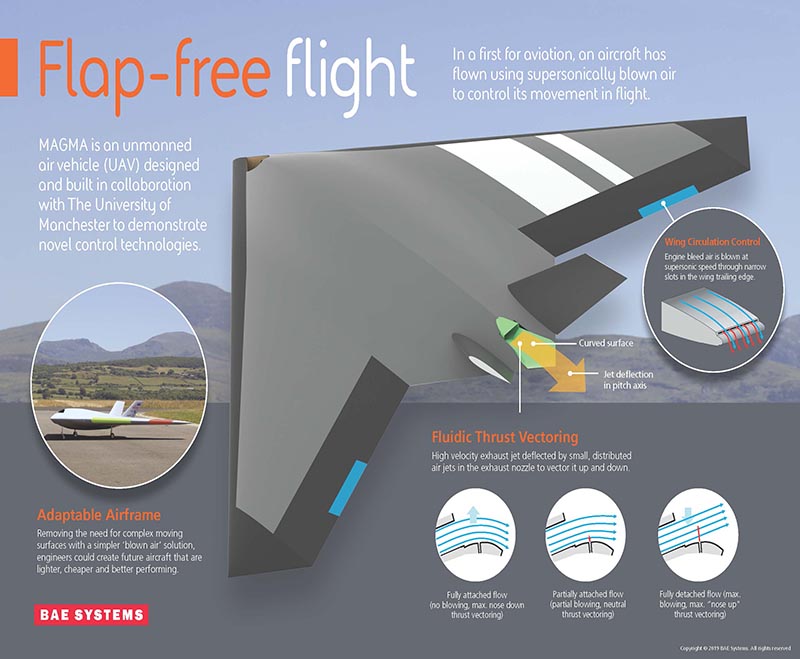 “We are excited to have been part of a long-standing effort to change the way in which aircraft can be controlled, going all the way back to the invention of wing warping by the Wright brothers. It’s been a great project for students to be part of, highlighting that real innovation in engineering is more about finding practical solutions to many hundreds of small technical challenges than having single moments of inspiration,” says Bill Crowther, senior academic and leader of the MAGMA project at The University of Manchester. “The partnership with BAE Systems has allowed us the freedom as a university to focus on research adventure, with BAE Systems providing the pathway to industrial application. We made our first fluidic thrust vectoring nozzle from glued together bits of plastic and tested it on a hair drier fan nearly 20 years ago. Today BAE Systems is 3D printing our components out of titanium and we are flight testing them on the back of a jet engine in an aircraft designed and built by the project team. It doesn’t get much better than that.”