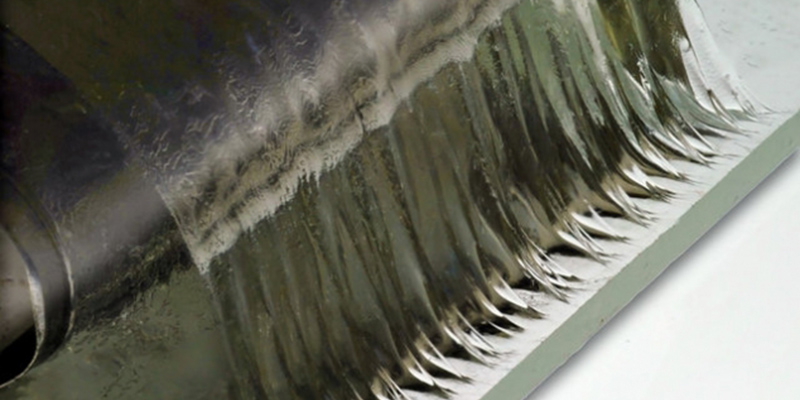 Engineered hydrogel being pulled away from a glass surface. The material shows a property called “tough wet adhesion” comparable to tendon and bone interface. The wavy edge instability at the interface is a hallmark of strongly adhered soft material on a rigid surface. Image: Felice Frankel

Nature has developed innovative ways to solve a sticky challenge: Mussels and barnacles stubbornly glue themselves to cliff faces, ship hulls, and even the skin of whales. Likewise, tendons and cartilage stick to bone with incredible robustness, giving animals flexibility and agility.

The natural adhesive in all these cases is hydrogel — a sticky mix of water and gummy material that creates a tough and durable bond.

Now engineers at MIT have developed a method to make synthetic, sticky hydrogel that is more than 90 percent water. The hydrogel, which is a transparent, rubber-like material, can adhere to surfaces such as glass, silicon, ceramics, aluminum, and titanium with a toughness comparable to the bond between tendon and cartilage on bone.

In experiments to demonstrate its robustness, the researchers applied a small square of their hydrogel between two plates of glass, from which they then suspended a 55-pound weight. They also glued the hydrogel to a silicon wafer, which they then smashed with a hammer. While the silicon shattered, its pieces remained stuck in place.

Such durability makes the hydrogel an ideal candidate for protective coatings on underwater surfaces such as boats and submarines. As the hydrogel is biocompatible, it may also be suitable for a range of health-related applications, such as biomedical coatings for catheters and sensors implanted in the body.

“You can imagine new applications with this very robust, adhesive, yet soft material,” says Xuanhe Zhao, the Robert N. Noyce Career Development Associate Professor in MIT’s Department of Mechanical Engineering. For example, Zhao’s group is currently exploring uses for the hydrogel in soft robotics, where the material may serve as synthetic tendon and cartilage, or in flexible joints.

Zhao and his students publish their results today in the journal Nature Materials.

A tough, flexible hydrogel that bonds strongly requires two characteristics, Zhao found: energy dissipation and chemical anchorage. A hydrogel that dissipates energy is essentially able to stretch significantly without retaining all the energy used to stretch it. A chemically anchored hydrogel adheres to a surface by covalently bonding its polymer network to that surface.

In developing the hydrogel, Yuk mixed a solution of water with a dissipative ingredient to create a stretchy, rubbery material. He then placed the hydrogel atop various surfaces, such as aluminum, ceramic, glass, and titanium, each modified with functional silanes — molecules that created chemical links between each surface and its hydrogel.

Zhao group compared these results with existing hydrogels, as well as elastomers, tissue adhesives, and nanoparticle gels, and found that the new hydrogel adhesive has both higher water content and a much stronger bonding ability.

“We basically broke a world record in bonding toughness of hydrogels, and it was inspired by nature,” Yuk says.

In addition to testing the hydrogel’s toughness with a hammer and a weight, Zhao and his colleagues explored its use in robotic joints, using small spheres of hydrogel to connect short pipes to simulate robotic limbs.

“Hydrogels can act as actuators,” Zhao says. “Instead of using conventional hinges, you can use this soft material with strong bonding to rigid materials, and it can give a robot many more degrees of freedom.”

The researchers also looked into its application as an electrical conductor. Yuk and other students added salts to a hydrogel sample, and attached the hydrogel to two metal plates connected via electrodes to an LED light. They found that the hydrogel enabled the flow of salt ions within the electrical loop, ultimately lighting up the LED.

Zhao’s group is currently most interested in exploring the hydrogel’s use in soft robotics, as well as in bioelectronics.

“Since the hydrogel contains over 90 percent water, the bonding may be regarded as a water adhesive, which is tougher than natural glues, such as in barnacles and mussels, and bio-inspired underwater glues,” Zhao says. “The work has significant implications in understanding bio-adhesion, as well as practical applications such as in hydrogel coatings, biomedical devices, tissue engineering, water treatment, and underwater glues.”

This research was supported in part by the Office of Naval Research and the National Science Foundation.