Linx Technologies announced that it has joined the Thread Group, an industry organization dedicated to market education and product certification for Thread, a low-power, wireless mesh networking protocol designed to easily and securely connect hundreds of devices in the home. Linx Technologies will have access to the Thread specifications, which are built on open standards and IPv6 technology with 6LoWPAN at its foundation, and will be able to certify and brand Thread-compliant products starting in the second half of 2015.
The Thread Group was formed by seven industry-leading organizations including Yale Security, Silicon Labs, Samsung Electronics, Nest Labs, Freescale® Semiconductor, Big Ass Fans and ARM. They developed Thread to provide a new and better way to connect products in the home by building on proven technology standards.

“We developed Thread to provide an easy and secure way for product developers and consumers to connect products in the home to each other and directly to the cloud. We’ve seen incredible momentum to date, and our membership has grown to more than 50 companies. We’re delighted that Linx Technologies will join our efforts to establish Thread as the most widely-adopted protocol powering the next generation of the connected home.” – Chris Boross, president, the Thread Group and technical product manager, Nest Labs

“We have believed in the advantages of 6LoWPAN-based mesh networks like Thread for some time, and will build our next generation 2.4 GHz modules based on Thread. Customers benefit from Thread’s superior mesh protocol and its simple, inexpensive wireless connection to the cloud. IoT gateways that can traverse firewalls have been the major hurdle to wirelessly connecting devices to the Internet. Thread solves this issue and will make it easier to provide lower cost gateways. Also, users of Linx’s Thread modules could avoid purchasing separate gateways, and instead connect through other Thread enabled IoT devices which are already in their home such as: TVs, cable boxes and thermostats. We joined Thread because we want to enable an ecosystem that greatly reduces the cost and complexity of connecting things in our homes to the Internet.” – Tolga Latif, President & CEO of Linx Technologies 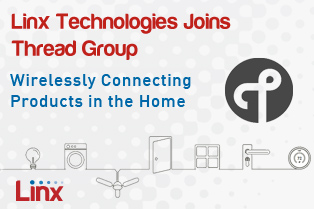 As the leading provider of wireless modules for remote control applications, Linx strives to take new technologies, like Thread and the Internet of Things (IoT), and make these technologies easy to apply. The Smartlinx™ platform is Linx’s new end-to-end IoT solution for connecting devices to the Cloud. The solution includes a device server for managing connections across firewalls, device management features, Android and iOS apps, advanced database storage and a flexible visualization front-end to analyze and report on data. As part of Thread Group Linx will offer Thread-based Smartlinx™ gateways and wireless modules for small and medium volume OEM’s.

In early 2015, Linx will release its first low cost SmartlinxTM gateway designed to work with most current Linx modules and remotes. OEMs with existing Linx module designs will have the option to connect their installed base of devices to the Internet. A typical application might be to control a device with a smart phone app where that device previously was controlled with a dedicated remote. In effect, the SmartlinxTM gateway enables two-way internet communication, control and monitoring of the system using Thread and cloud based automation.

The first Thread-certified products are expected to ship in late 2015.