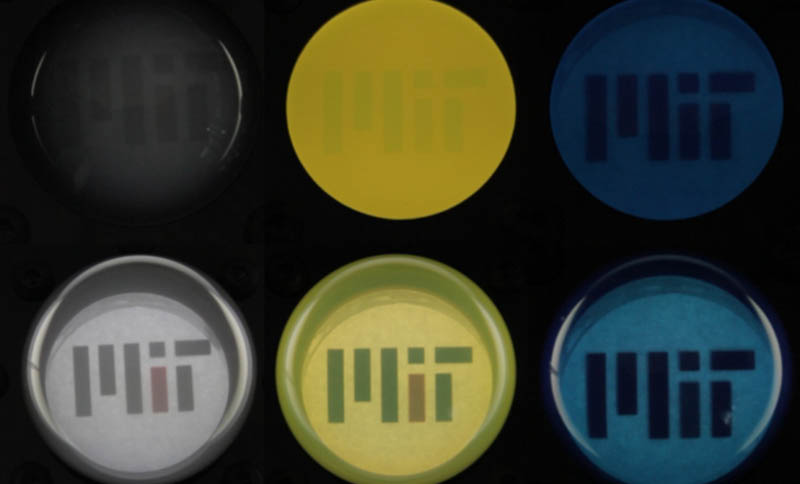 Three colors of PDMS — a widely used rubbery, transparent polymer — are inflated like a balloon as light from a light box shines from below. The top row shows the PDMS material before being inflated. The bottom row shows the PDMS inflated, revealing the MIT logo placed underneath. Image credit: Melanie Gonick/MIT

If you’ve ever blown up a balloon or pulled at a pair of pantyhose, you may have noticed that the more the material stretches, the more transparent it becomes. It’s a simple enough observation: the thinner a material, the more light shines through.

Now MIT scientists have come up with a theory to predict exactly how much light is transmitted through a material, given its thickness and degree of stretch. Using this theory, they accurately predicted the changing transparency of a rubber-like polymer structure as it was stretched like a spring and inflated like a balloon.

Francisco López Jiménez, a postdoc in MIT’s Department of Civil and Environmental Engineering, says the researchers’ experimental polymer structure and their predictive understanding of it may be useful in the design of cheaper materials for smart windows — surfaces that automatically adjust the amount of incoming light. 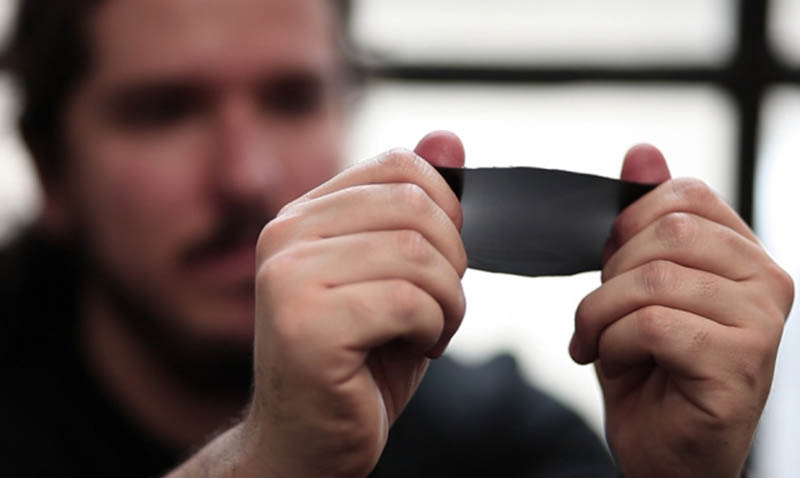 MIT postdoc Francisco López Jiménez stretches a rectangular sheet of the polymer PDMS he and his colleagues used to predict how much light is transmitted when a specific mechanical force is applied. Image credit: Melanie Gonick/MIT

“For buildings and windows that automatically react to light, you don’t have to spend as much on heating and air conditioning,” López Jiménez says. “The problem is, these materials are too expensive to produce for every window in a building. Our idea was to look for a simpler and cheaper way to let through more or less light, by stretching a very simple material: a transparent polymer that is readily available.”

López Jiménez envisions covering window surfaces with several layers of the polymer structure. He says designers could use the group’s equation to determine the amount of force to apply to a polymer layer to effectively tune the amount of incoming light.

The research team — which includes López Jiménez; Pedro Reis, the Gilbert W. Winslow CD Associate Professor of Civil and Environmental Engineering and Mechanical Engineering; and Shanmugam Kumar of the Masdar Institute of Science and Technology in Abu Dhabi — has published its results this week in the journal Advanced Optical Materials.

The current work arose from a related project by Reis, López Jiménez, and Kumar, in which they analyzed the light-transmitting properties of a simple block of PDMS — a widely used rubbery, transparent polymer. The polymer block contained some darkened regions, and the team was looking to see how deforming the block would change the light traveling through the material.

“It was a happy accident,” López Jiménez says. “We were just playing with the material, and we soon got interested in how we can predict this and get the numbers right.”

The researchers set out to fabricate a type of soft color composite — a material that changes color or transparency in response to external stimuli, such as electrical, chemical, or mechanical force. Reis and López Jiménez created a thin, rectangular stack of transparent PDMS sheets, mixed with a solution of black, micron-sized dye particles, that may be easily stretched, or deformed mechanically. With no deformation, the structure appears opaque. As it is stretched or inflated, the material lets in more light. 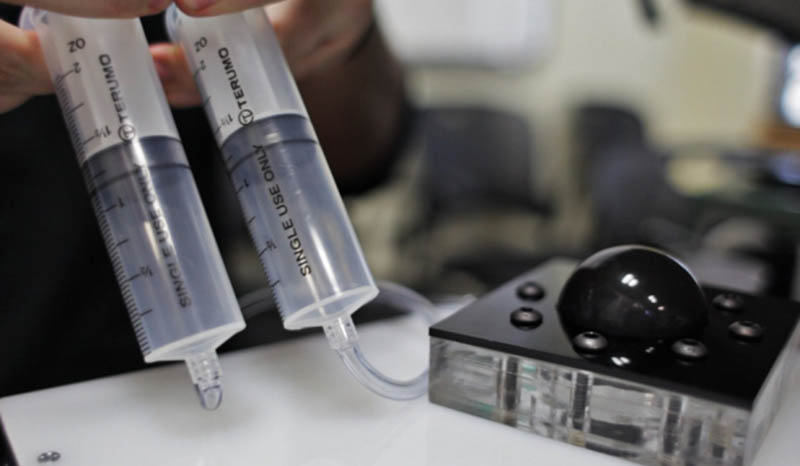 In initial experiments, the researchers shone a light through the polymer structure infused with dye particles and characterized the amount of light transmitted through the material, without any deformation. They then stretched the polymer perpendicular to the direction of light and measured both the thickness of the polymer and the light coming through.

A theory on light

They compared their measurements with predictions from their equation, which they devised using the Beer-Lambert Law, a classical optics theory that describes the way light travels through a material with given properties. The team combined this theory with their experimental analysis, and derived a simple equation to predict the amount of light transmitted through a mechanically deformed PDMS structure.

To verify their equation, Reis and López Jiménez carried out one more set of experiments, in which they clamped the PDMS structure in the shape of a disc, then inflated the material like a balloon, as they shone a light from below. They measured the amount of light coming through and found that as the material was stretched and thinned, more light came through, at exactly the same intensities that were predicted by their equation.

“We can predict and characterize the evolution of light as we strain it,” López Jiménez says. “If you give me the initial material properties and measure the incoming light intensity, we know exactly how much light will go through with deformation.”

He adds that going forward, he hopes to use the equation to help tune the transparency and optical transmittance of materials with more complex surfaces and textures.

“Soft color composites offer exciting opportunities to provide materials with switchable and tunable optical properties,” Reis says. “Applying this relatively simple but both robust and predictable mechanism is an exciting challenge worth pursuing for concrete engineering applications such as indoor light control through smart windows.”

Shengqiang Cai, assistant professor of mechanical and aerospace engineering at the University of California at San Diego, says that in addition to smart window technology, the group’s colored polymer may be used applied as a strain test for other materials.

“I imagine that a thin layer of such soft composite can be potentially used as nonlinear strain gauge,” says Cai, who was not involved in the study. “Through attaching a thin layer of the soft composite to an engineering structure, we may be able to visualize its surface deformation, which is clearly important information for monitoring the structure’s safety. The idea is very simple. However, functions of the system are very robust, as demonstrated by these authors.”

This work was supported by the Cooperative Program between the Masdar and MIT.