“Kill the bill, don’t kill us,” one woman screamed, inches from a U.S. Capitol Police officer’s face Monday afternoon in a marbled hallway of the U.S. Capitol at the start of the one and only public hearing on the GOP’s last-ditch effort to replace the Affordable Care Act.

The protesters had begun lining up at 5:30 a.m. — some paid others to hold their places — and by 2 p.m., hundreds of people were waiting for a coveted seat for the Senate Finance Committee’s hearing in Room 215 of the Dirksen Senate Office Building. Around lunchtime, Sen. Ron Wyden (D-Ore.) strolled through, passing out slices of pizza to some in line.

The line was a five-minute walk from end to end.

Dozens had come in wheelchairs. Others used walkers. Many wore the signature red T-shirts of the disability rights group ADAPT. One person was dressed as the Grim Reaper. Another wore a balloon painted like a face with extra-large eyes, so lawmakers would know “I have my eyes on them.” 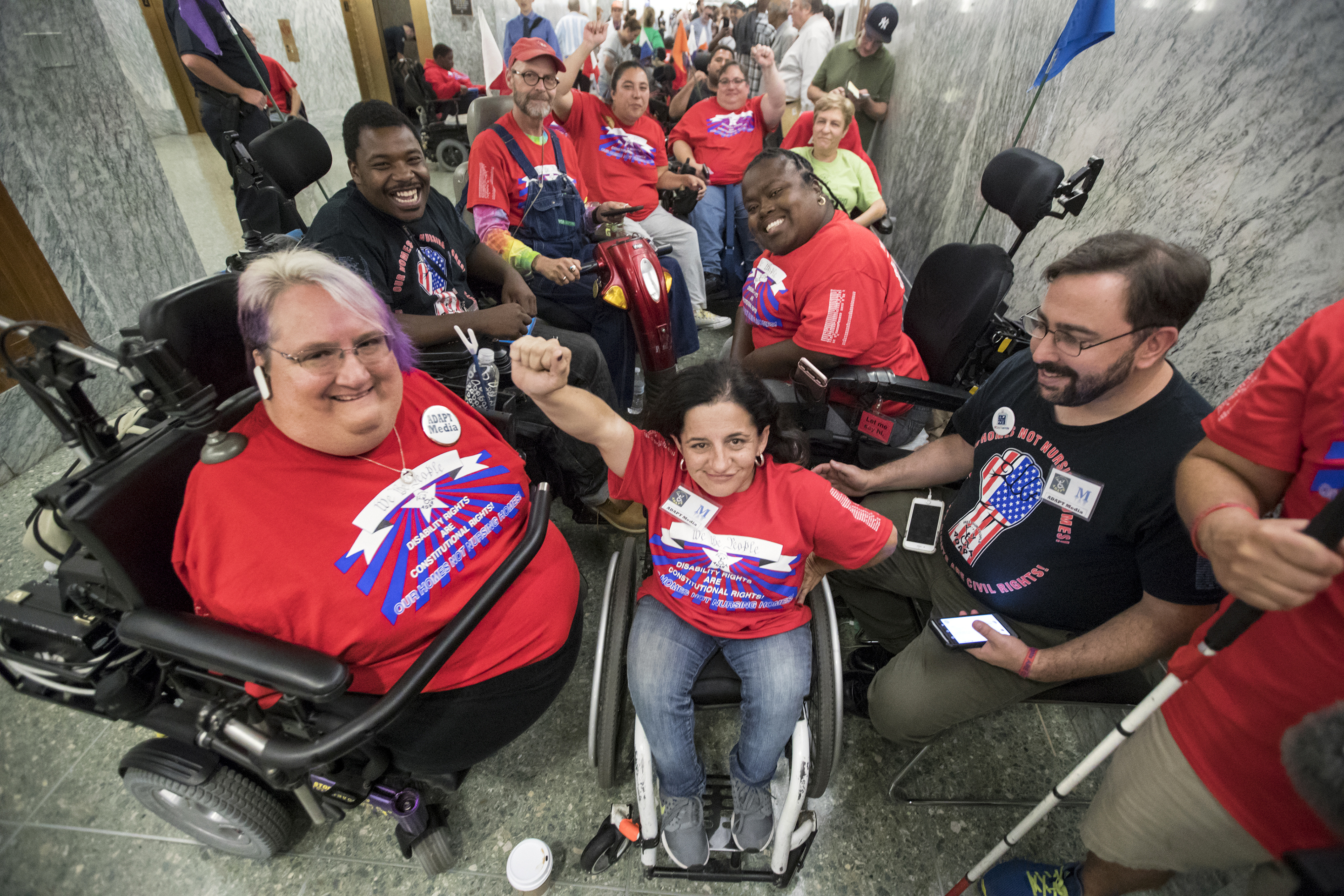 Colleen Flanagan of Boston, center, and others in wheelchairs with a group called ADAPT, rally prior to a hearing by the Senate Finance Committee on the Graham-Cassidy health care repeal, on Capitol Hill in Washington, Monday, Sept. 25, 2017. (AP Photo/J. Scott Applewhite)

“All the people down here are relying on this health care bill to not go through,” said Shaylin Sluzalis, 22, from Pennsylvania, who accompanied her sister, Britney, who has cerebral palsy.

Protesters, police officers and reporters jockeyed for elbow room in the cramped space, by now hot and claustrophobic.

Rowdiness broke out in the long line when the throng discovered that congressional staffers were going to admit only 20 or 30 people — the number of public spaces in the small room reserved for a crucial hearing.

Chants started. “No cuts to Medicaid — save our liberty,” they cried, over and over.

Some hurled themselves from their wheelchairs and laid on the floor, prostrating themselves in resistance at the feet of Capitol Police.

The police, who had come equipped with fistfuls of white plastic handcuffs, began arresting those on the ground. Police carried the ones unable to walk by their arms and legs and deposited them on the floor down the hall, to be later placed back in their power chairs and taken away.

Officers screamed at journalists and onlookers to clear the area in order to escort handcuffed activists out of the building.

This was the backdrop against which the bill’s authors, Sens. Lindsey Graham (R-S.C.) and Bill Cassidy (R-La.) made their way through the crowd to enter the hearing room’s back door to begin the proceedings. “Shame! Shame!” the protestors yelled.

As Senate Finance Committee Chairman Sen. Orrin Hatch gamely tried to call the hearing to order, chants of “No cuts to Medicaid — save our liberty” resonated from the hallway. He ordered that the door be closed.