This summer, the Oakland Museum of California announced a new public arts grant program. Except instead of money, selected artists would receive steel. Tons of it.

The Bay Bridge Steel Program emerged out of a desire to salvage and repurpose the metal that once made up the eastern span of San Francisco’s Bay Bridge, originally constructed in 1933. (It was replaced in 2013.) The steel in question, sourced from “spans referred to as ‘504s’ and ‘288s’ (in reference to their length in feet),” according to the application material, would be available for civic and public art projects within the state of California.

The program represents a unique opportunity to adaptively reuse infrastructure, upcycling what might have been waste. And yet any instance of adaptive reuse is inherently reactive because the design process dictated by an existing condition. 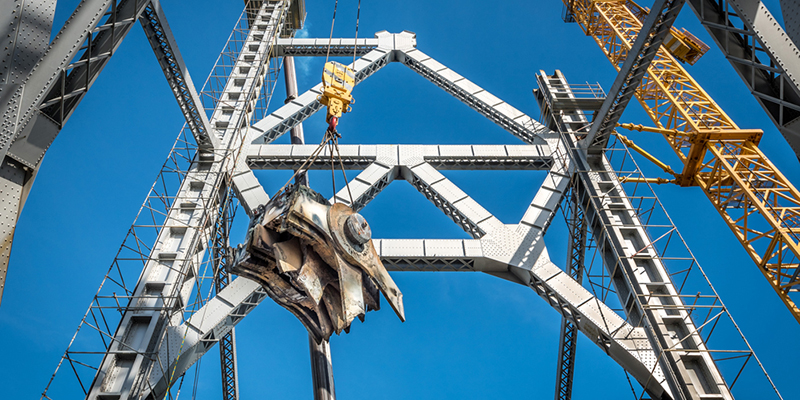 But what if buildings, bridges, and highways were designed for disassembly? What if the built environment was designed in such a way that it could be easily and infinitely refashioned? What if the Bay Bridge could have been deconstructed, beam by beam, with no waste whatsoever? What if there was such a thing as recycled buildings?

This is the world architect and building scientist Bradley Guy—assistant professor of sustainable design at The Catholic University of America School of Architecture and Planning, as well as author of Unbuilding: Salvaging the Architectural Treasures of Unwanted Houses—has been slowly, arduously advocating for since the mid-1990s, when he was introduced to the idea of designing for deconstruction. Design for deconstruction (or disassembly, sometimes abbreviated DfD) is a design philosophy and set of strategies that acknowledge that the vast majority of buildings have a life span.

“Buildings are dynamic,” Guy says. “Parts wear out, technology changes, aesthetic fashion [evolves].” Most buildings eventually meet their end, and when they do, he says, we ought to be able to recover that building’s component parts and repurpose them.

The idea isn’t completely new. In 1851, the Brits built a 990,000-square-foot exhibition hall called the Crystal Palace. It was designed for deconstruction, its assemblies were simple and easy to access, and after the exhibition, the iron-and-plate-glass structure was taken apart piece by piece and reassembled on Penge Peak south of London. Today, the philosophy can be seen in the design of disaster housing and temporary military structures. 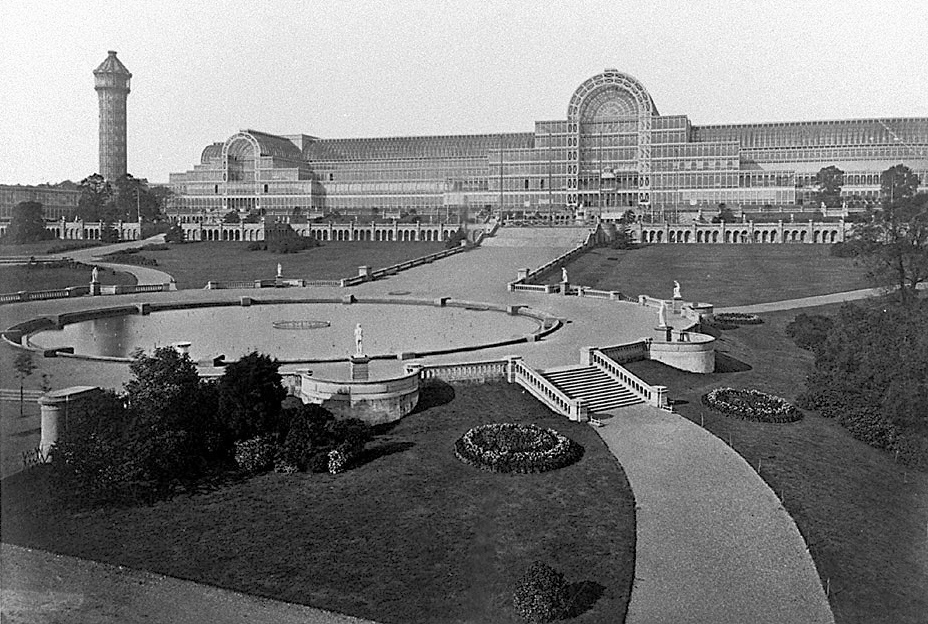 But according to Guy, most buildings are temporary. And rather than the reactivity of adaptive reuse—in which only a fraction of a building’s materials may be usable—he suggests a more proactive approach: understanding at the outset how a building will be dismantled and making that process as efficient as possible.

There is no one-size-fits-all approach to designing for deconstruction, but Guy says there are some obvious things architects should keep in mind: “Don’t glue everything; don’t use toxic materials.” Also, avoid composite materials and concealed connections. Keep assemblies simple and separable. Dimensions are also important, he says, and recommends designers use steel and timber at standard lengths whenever possible.

In his classes, Guy pushes his students even further, asking them to design a building’s second life in addition to its first: “What is this going to be after you take it apart? Can you plan even that?” Many see the approach as an environmental imperative. Guy has the stats memorized: “The renovation and demolition of buildings produces 91 percent of all construction and demolition waste in the United States every year.” Proponents see design for deconstruction as part of the answer.

The approach is catching on. Over the past 10 years, designers of everything from products to buildings have begun to consider end of life. In 2002, architectural thought leader William McDonough helped popularize some of these ideas with his book Cradle to Cradle: Remaking the Way We Make Things (a book that itself could be broken down and recycled nearly ad infinitum), and McDonough + Partners’ NASA Sustainability Base was designed with these principles in mind. 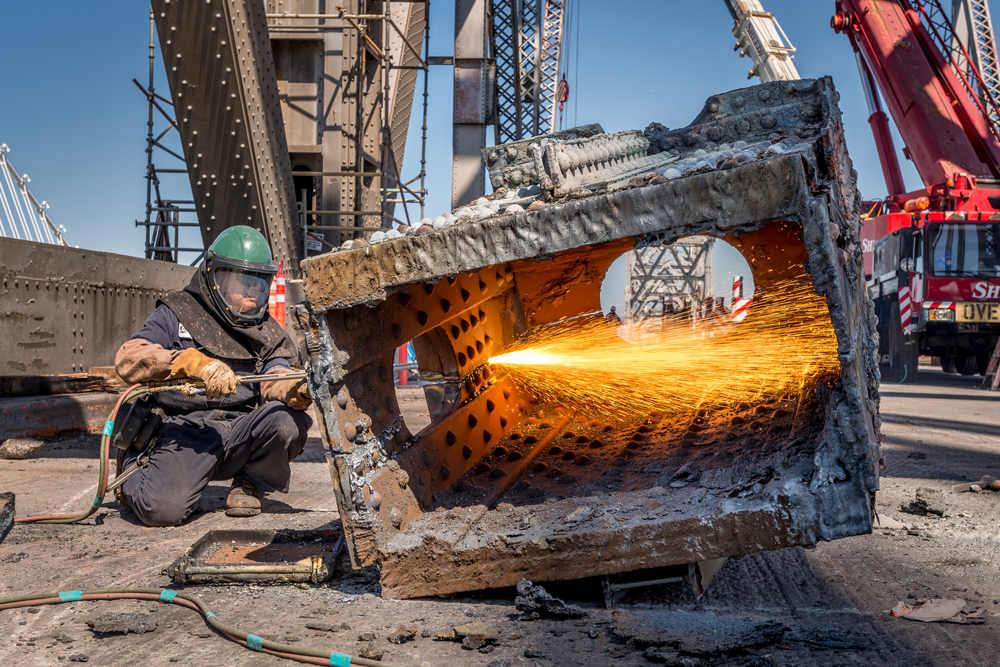 From 2007 to 2009, the EPA held the annual Lifecycle Building Challenge, which recognized projects that considered the “full lifecycle of buildings and materials.” Winners included David Miller’s Pavilion in the Park in Seattle and the Loblolly House by KieranTimberlake, a prefabricated, modular structure with detailed plans for disassembly.

Now the philosophy is finding its way into green-building rating systems. Rating systems used in the UK, Hong Kong, and Australia all award points for design for deconstruction. LEED does not yet give points for design for deconstruction, but LEED for Healthcare does include a credit for “Design for Flexibility,” which encourages architects to think about future uses, Guy says. And, he adds, language around deconstruction is being added to industry standards and resources such as the Construction Specifications Institute’s MasterFormat.

As one might expect, the Living Building Challenge is pushing the envelope the furthest. Version 3.0, released in 2014, mandates that architects work to reduce waste at every phase of a building’s life, including design, construction, operation, and end of life. Design teams are required to create a Material Conservation Management Plan that includes a proposal for deconstruction or adaptive reuse.

But design for deconstruction can’t be measured the way one measures energy use, which creates a challenge for cities and others. “Not too many people argue against design for deconstruction, except, ‘How do I make a code out of it? How do I measure it?’ That’s the most common problem I run into,” Guy says. For instance, King County, Washington has an official guide for designing for disassembly, of which Guy was a coauthor, but it’s not mandatory. He says he has yet to see a municipal building code that requires a design team to plan for end of life. 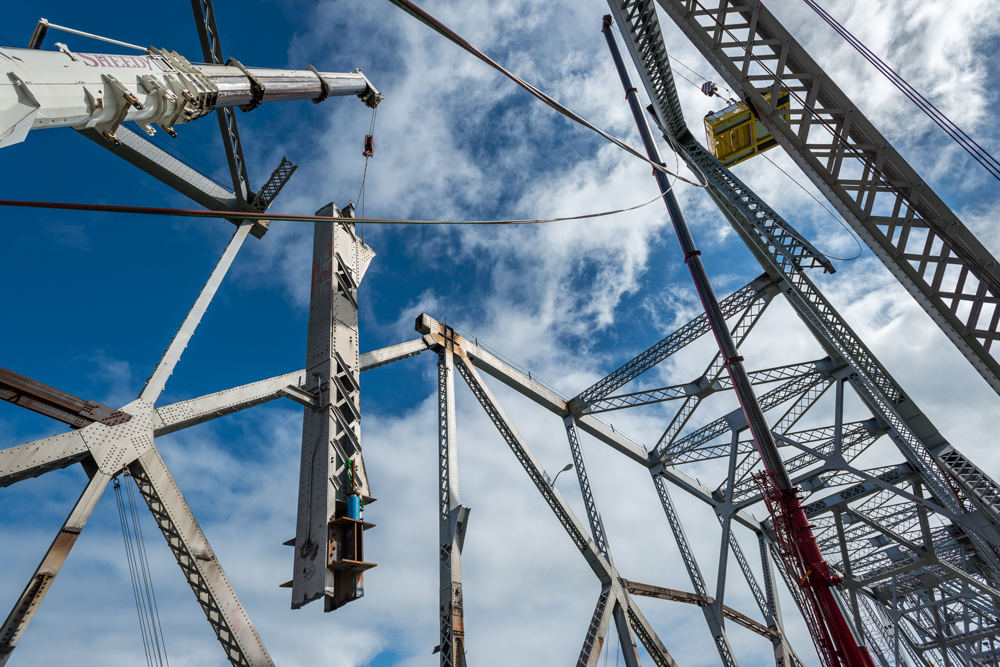 Another challenge is cost. Demolition is far cheaper than taking a building apart by hand, even when considering the money generated by the sale of the recovered materials. And then there’s the labor and skills training. “You need to know how to take it apart, and you should know what the materials are,” Guy says. “A big issue is the long life of a building and the difficulty in maintaining information about material properties.” Those materials may not be desirable 50 years from now. Many existing buildings use materials now known to be hazardous. Will this still be true in another 50 years?

There’s also a lack of research on the topic, in part because buildings designed for deconstruction can’t be studied until they reach their end of life. Guy is one of the few building scientists who has looked at deconstruction from an academic perspective, studying how much time it takes to deconstruct older buildings with today’s methods.

“It can get very specific, such as how many tasks are required to recover a material and make it acceptable for reuse,” he says. With any luck, it will be decades before NASA’s Sustainability Base reaches the end of its life; when it does, Guy hopes someone will be there to study it.

Meanwhile, the world continues to make do with elements never designed for reuse. A precursor to the Oakland Museum’s Bay Bridge Steel Program is the Big Dig House by Single Speed Design, a private residence in Lexington, Massachusetts, that made use of long span structural concrete and steel discarded during the demolition of I-93 in Boston. (The surface-level interstate was routed into a series of tunnels in 2007.)

Fifty years from now, how much current infrastructure will have to be abandoned? Will there be an attempt to repurpose it? If so, it won’t be easy or efficient, because the built environment continues to be thought of as permanent. It isn’t. Perhaps one day cities and infrastructure will be built in a way that acknowledges their ephemeral nature and designed into their first life the ability to build a second.

This blog originally appeared on lineshapespace.com/recycled-buildings.