Back in November, the city of San Diego, California, became one of several dozens in the US to install ShotSpotter audio sensors in their high-crime neighborhoods. The city of Syracuse implemented the same system in the more dangerous sections of the Western New York metropolis, which (like San Diego) officials hope will reduce the frequency of gun-related crimes. The audio sensory system costs around $250,000 a year, of which the San Diego District Attorney’s Office agreed to pay the first year.

This week, representatives of the San Diego PD will present data in a meeting of the Public Safety and Livable Neighborhoods City Council Committee. While SPD officials aim to recognize the “benefits” they’ve been reaping from the ShotSpotter system over the past ten months, there’s one major flaw in the nature of their presentation—these audio sensors only do what they’re supposed to 16 percent of the time. ShotSpotter systems were installed in four southeastern San Diego neighborhoods, and the data that’s been collected since the initial installation isn’t showing the results city and police officials were expecting.

ShotSpotter audio sensors are mounted on light poles and other structures throughout a given area that automatically issue reports to police dispatch when activated by gunfire. The data collected indicated the audio sensors were activated 131 times over the last ten months, and even detected 90 percent of gunshots that were fired within 95 feet of these audio sensors. When police arrived at these scenes however, gunshot evidence was found at just 21 of the 131 sites. According to the data, ShotSpotter audio sensors prompted police investigations in just two out of ten instances they were activated in San Diego.

Supporters of the ShotSpotter system cite stats like how only 23 percent of gunshots fired are reported to police, as justification for the system, despite the evident flaws that will be included in this week’s data presentation. The city’s police department believes the audio sensory system “gives a voice” to members of these crime-ridden communities too afraid of reporting gun violence to law enforcement.

According to San Diego PD officials, the ShotSpotter is supposed to help build trust within these communities. In reality, the audio sensory system is actually the cause for concern among many of San Diego’s public advocacy groups. The Electronic Frontier Foundation, for example, is against using mass data collection systems like the ShotSpotter. The group claims public privacy rights are being violated while data is being collected when no gunshots are detected. 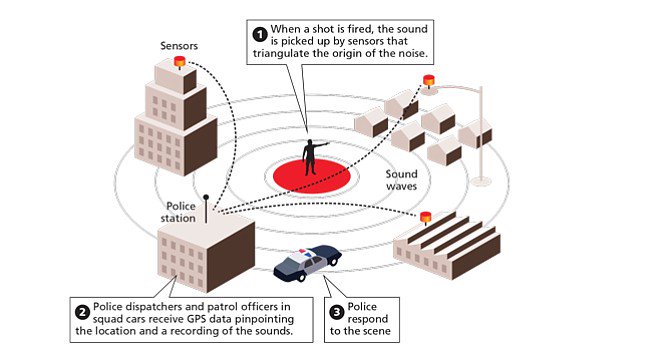