It can be used to cool or heat the air in a room or to cool or heat liquids. And it looks like something that Q—the tech specialist and gadgeteer in the James Bond films—might have come up with. The prototype device, which has been developed by a research team led by Professors Stefan Seelecke and Andreas Schütze at Saarland University, is able to transfer heat using ‘muscles’ made from nickel-titanium. Nickel-titanium or nitinol, as it is often known, is a shape-memory material that releases heat to its surroundings when it is mechanically loaded in its superelastic state and absorbs heat from its surroundings when it is unloaded. This unusual property is the reason why nitinol is also referred to as a ‘smart alloy’ or as ‘muscle wire.” This effect has been exploited by the Saarbrücken researchers who have developed an environmentally friendly heating and cooling system that is two to three times more efficient than conventional heating and cooling devices.

The EU Commission and the US Department of Energy have both assessed the new process and consider it to be the most promising alternative technology to existing vapour-compression refrigeration systems.

The team of Saarbrücken engineers will be exhibiting their technology at this year’s Hannover Messe from the 1st to the 5th of April at the Saarland Research and Innovation Stand (Hall 2, Stand B46).

The rules are clear enough: To cool something down, you need to remove heat from it. And to warm something up, thermal energy has to be supplied to it. The prototype system that the engineers at Saarland University have developed does both these things. But their system transports heat using a novel method that avoids the problems and disadvantages associated with conventional heating and cooling systems. “Our system does without the conventional refrigerants that are so damaging to the environment,” explains Professor Andreas Schütze of Saarland University—an expert in the field of sensor and measuring technology.

The underlying principle is simple and essentially involves subjecting a particular shape-memory alloy (SMA) – in this case nickel-titanium—to controlled loading/unloading cycles. “The resulting phase transitions that occur in the alloy’s crystal lattice release or absorb latent heat, depending on which part of the cycle the material is in,” says Professor Stefan Seelecke, who holds the Chair in Intelligent Material Systems at Saarland University. This effect is particularly pronounced in wires made from nickel-titanium. “When pre-stressed nitinol wires are unloaded at room temperature, they cool down by as much as 20 degrees,” says Felix Welsch who has been working on the prototype as part of his doctoral research project, along with his team colleague Susanne-Marie Kirsch. This phenomenon makes it possible to remove heat from the system. “When the wires are mechanically loaded they heat up by a similar amount, so that the process can also be used as a heat pump,” explains Welsch. 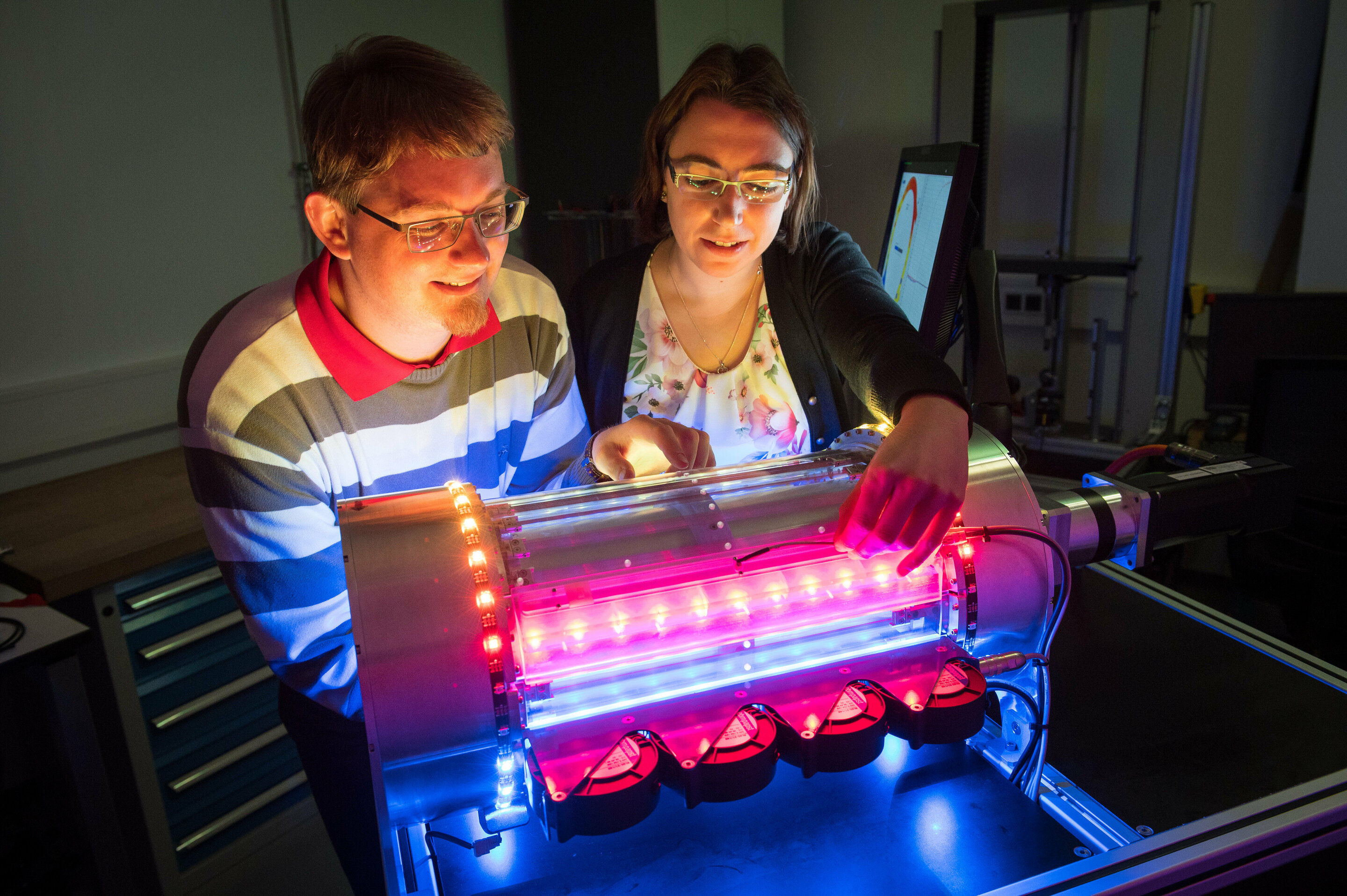 Figure 1: A prototype that could have come from James Bond’s master gadgeteer Q — doctoral research students Felix Welsch and Susanne Marie Kirsch with the first ever machine that cools air using muscles made of nickel-titanium. (Image Source: Oliver Dietze)

The prototype is the first continuously operating machine that cools air using this process. The team has designed and developed a patent-pending cam drive whose rotation ensures that bundles of 200 micron-thick nitinol wires are alternately loaded and unloaded in such a way that heat is transferred as efficiently as possible. Air is blown through the fibre bundles in two separate chambers: in one chamber the air is heated, in the other it is cooled. The device can therefore be operated either as a heat pump or as a refrigerator.

But what sounds so simple turns out to be difficult and complex to implement. The engineers at Saarland University and at Zema (Center for Mechatronics and Automation Technology) in Saarbrücken have spent a number of years working on the problem in different projects, including the DFG-funded priority programme “Ferroic Cooling.” Using a combination of experimental investigations and numerical modelling they were able to identify how to maximize the efficiency of the underlying mechanism, the wire loading level needed to achieve a specific degree of cooling, the ideal rotational speed and how many nitinol wires need to be included in a bundle. “The greater the surface area, the faster the heat transfer, that’s why bundles of wires provide the best cooling capabilities,” explains Susanne-Marie Kirsch. “We use a thermal imaging camera to analyse precisely how the heating and cooling stages proceed.” As a result of their research work, the engineering team now has a range of parameters that they can adjust to tailor their system to meet different needs. “We have taken the results obtained so far and have developed a software program that allows us to precisely tune our heating and cooling technology on a computer for specific applications. Once the computer modelling and planning has been completed, the system can then be built,” explains Kirsch.

This basic research may well have interesting industrial applications, because the novel heating and cooling technology developed in Saarbrücken is highly efficient. Depending on the alloy used, the heating or cooling power of the system is up to thirty times greater than the mechanical power required to load and unload the alloy wire bundles. That already makes the new system at least twice as good as a conventional heat pump and three-times better than a conventional refrigerator. “Our new technology is also environmentally friendly and does not harm the climate, as the heat transfer mechanism does not use liquids or vapors. So the air in an air-conditioning system can be cooled directly without the need for an intermediate heat exchanger, and we don’t have to use leak-free, high-pressure piping,” explains Professor Seelecke.

The team is currently working on further optimizing heat transfer within the system in order to boost the efficiency of the new technology even more. “Our objective is to get to a stage where almost all of the energy from the phase transition is being used for heating or cooling,” says doctoral student Felix Welsch.