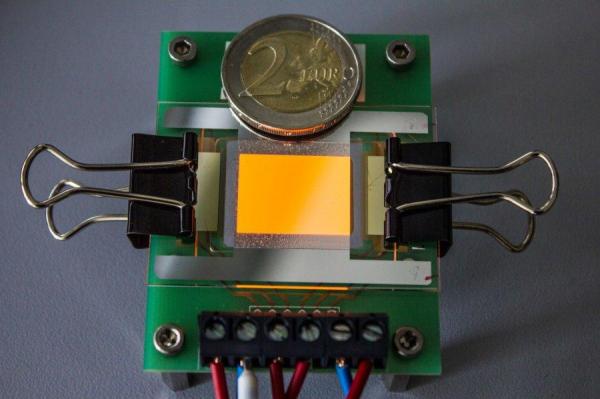 For the first time, scientists have fashioned working OLED electrodes out of graphene. The breakthrough could pave the way for a variety of smart material applications.

Already, scientists have integrated the new OLEDs into touch-screen displays, like those used in smartphones.

“This was a real breakthrough in research and integration of extremely demanding materials,” lead researcher Beatrice Beyer, a scientists at the Fraunhofer Institute for Organic Electronics, Electron Beam and Plasma Technology FEP, said in a news release.

In its pure 2D form, graphene consists of a single layer of carbon atoms arranged in a lattice pattern. The material is extremely strong and flexible. It is also an efficient conductor of heat and electricity. An OLED is an organic light-emitting diode, a thin film that turns electricity into light.

Researchers turned graphene into an OLED electrode by heating a pure copper wafer to 800 degrees Celsius and supplying a mixture of methane and hydrogen. The two compounds trigger a chemical reaction, causing the methane to dissolve into the copper wafer and produce carbon atoms. After the wafer and carbon layer cool, a carrier polymer is applied and the copper is etched away.

The resulting OLED electrode — each of which measure 2 by 1 square centimeters — can be coupled with a transparent polymer film to operate like a smartphone touch screen, making the use of breakable glass unnecessary.

“The first products could already be launched in two to three years,” concluded Beyer.