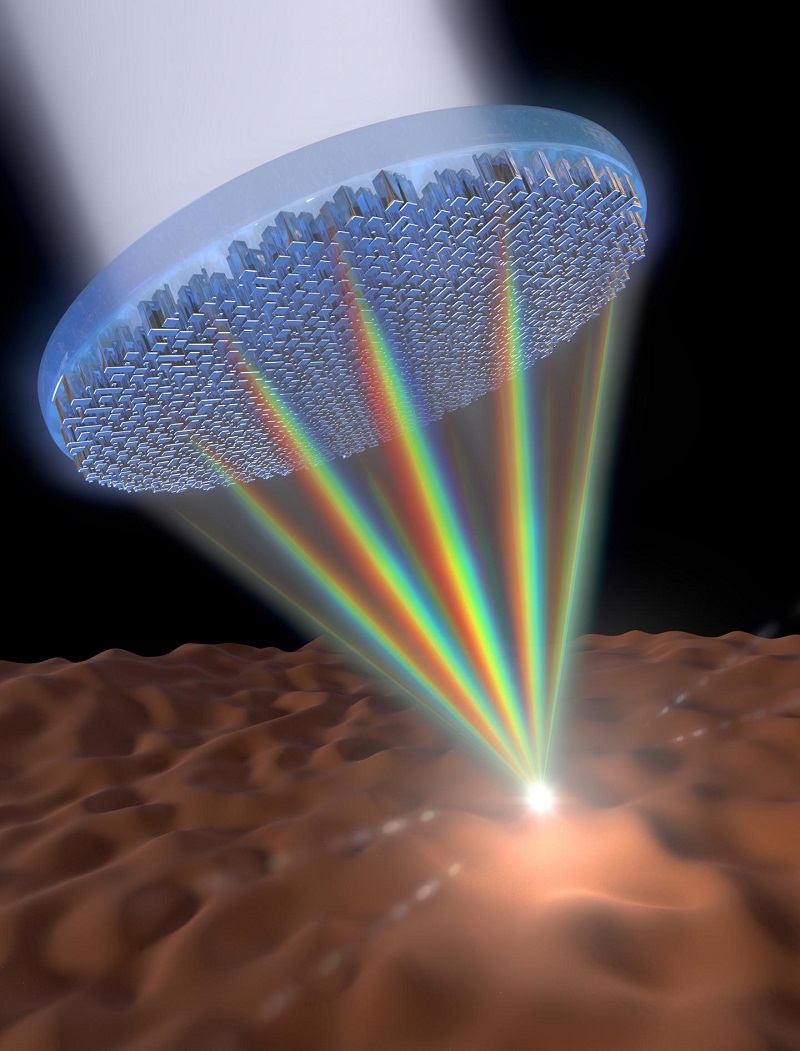 This flat metalens is the first single lens that can focus the entire visible spectrum of light — including white light — in the same spot and in high resolution. It uses arrays of titanium dioxide nanofins to equally focus wavelengths of light and eliminate chromatic aberration. Image credit: Jared Sisler/Harvard SEAS

Metalenses — flat surfaces that use nanostructures to focus light — promise to revolutionize optics by replacing the bulky, curved lenses currently used in optical devices with a simple, flat surface. But, these metalenses have remained limited in the spectrum of light they can focus well. Now a team of researchers at the Harvard John A. Paulson School of Engineering and Applied Sciences (SEAS) has developed the first single lens that can focus the entire visible spectrum of light — including white light — in the same spot and in high resolution. This has only ever been achieved in conventional lenses by stacking multiple lenses.

The research is published in Nature Nanotechnology.

Focusing the entire visible spectrum and white light – combination of all the colors of the spectrum — is so challenging because each wavelength moves through materials at different speeds. Red wavelengths, for example, will move through glass faster than the blue, so the two colors will reach the same location at different times resulting in different foci. This creates image distortions known as chromatic aberrations.

Cameras and optical instruments use multiple curved lenses of different thicknesses and materials to correct these aberrations, which, of course, adds to the bulk of the device.

“Metalenses have advantages over traditional lenses,” said Federico Capasso, the Robert L. Wallace Professor of Applied Physics and Vinton Hayes Senior Research Fellow in Electrical Engineering at SEAS and senior author of the research. “Metalenses are thin, easy to fabricate and cost effective. This breakthrough extends those advantages across the whole visible range of light. This is the next big step.”

The Harvard Office of Technology Development (OTD) has protected the intellectual property relating to this project and is exploring commercialization opportunities.

“One of the biggest challenges in designing an achromatic broadband lens is making sure that the outgoing wavelengths from all the different points of the metalens arrive at the focal point at the same time,” said Wei Ting Chen, a postdoctoral fellow at SEAS and first author of the paper. “By combining two nanofins into one element, we can tune the speed of light in the nanostructured material, to ensure that all wavelengths in the visible are focused in the same spot, using a single metalens. This dramatically reduces thickness and design complexity compared to composite standard achromatic lenses.”

“Using our achromatic lens, we are able to perform high quality, white light imaging. This brings us one step closer to the goal of incorporating them into common optical devices such as cameras,” said Alexander Zhu, co-author of the study.

Next, the researchers aim to scale up the lens, to about 1 cm in diameter. This would open a whole host of new possibilities, such as applications in virtual and augmented reality.

This paper was coauthored by Vyshakh Sanjeev, Mohammadreza Khorasaninejad, Zhujun Shi, and Eric Lee. It was partially supported by the Air Force Office of Scientific Research. This work was performed in part at the Center for Nanoscale Systems (CNS), a member of the National Nanotechnology Coordinated Infrastructure (NNCI), which is supported by the National Science Foundation.