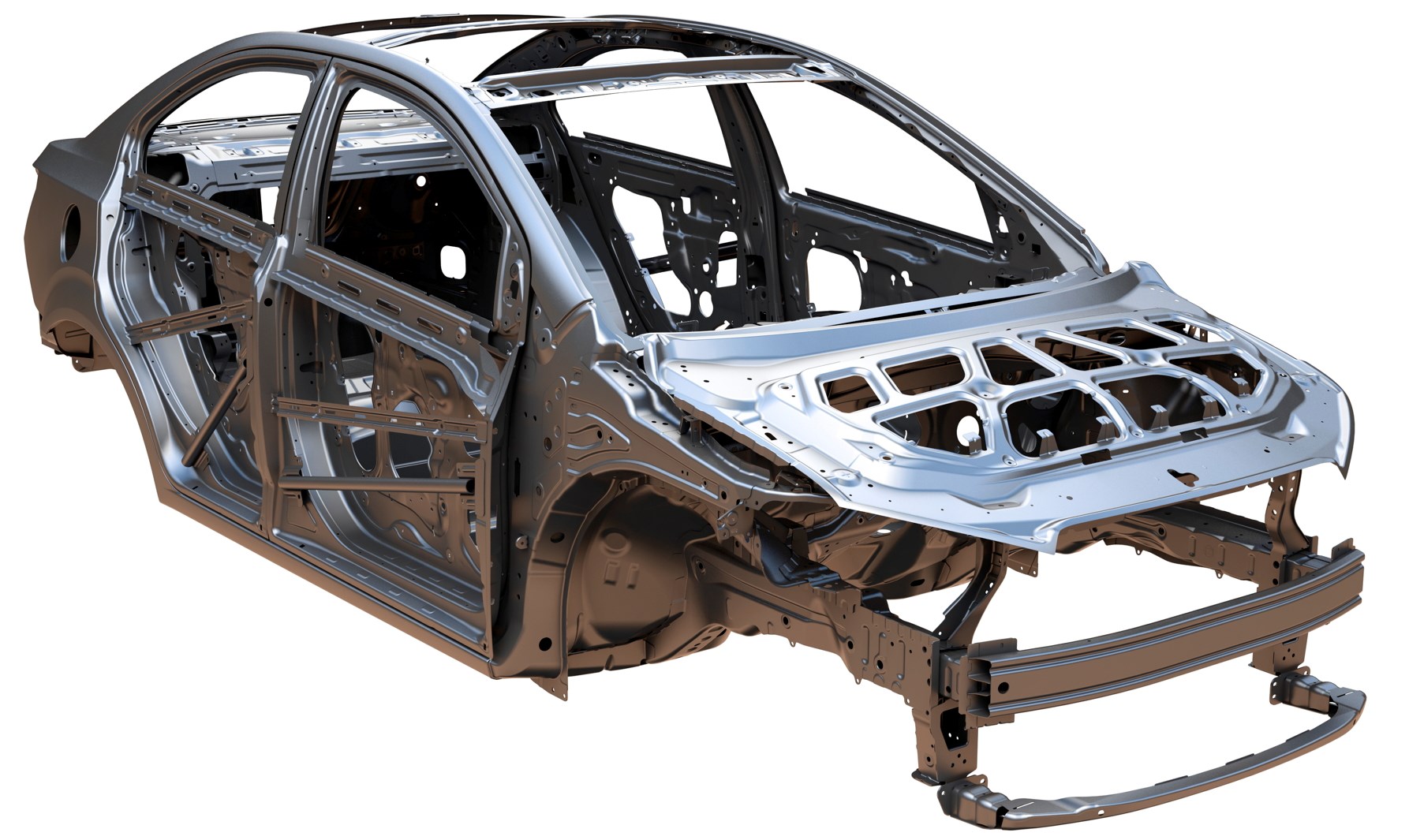 Car makers are experimenting with alternative materials in order to make vehicles lighter and more fuel efficient. Contending with both customer satisfaction and changing federal emissions regulations, they need material that is both very light and strong. The federal government has mandated a minimum fuel economy of 54.5 mpg for cars and light-duty trucks produced after model year 2025, which will double the fuel efficiency of vehicles that were new in 2012. The change is also intended to reduce U.S. oil consumption by 12 million barrels and save $1.7 trillion in gas.

This necessitates changing the average weight of light vehicles in North America from 3,798 pounds, as it is in 2015, to 3,380 pounds by 2025. The majority of that mass is lost from the body and powertrain.

In order to hit that target, companies like Ford, which recently began production of aluminum-bodied F-150 trucks, and Honda, which has been working on melding steel and aluminum, are exploring different possibilities when it comes to materials. Auto manufacturers polled in 2014 said that they were most likely to use aluminum in order to help meet new fuel economy standards, with 27 percent preferring this material, 16 percent planning on using a “multi-material solution,” and 18 percent unsure of what they would use. “Advanced high-strength steel” was preferred by 11 percent.

Meanwhile, Craig Parsons, automotive segment president of the Rhode Island-based company NanoSteel, presents steel transformed at an elemental level as an alternative to aluminum or other automotive light-weighting techniques. Mixing in this way creates nano-scale microstructures that dictate the steel’s mechanical and physical properties.

Automakers themselves have set an industry target for the development of 3rd generation Advanced High Strength Steels (AHSS) that deliver both high strength and high ductility. High strength provides the ability to use less steel and reduce weight without compromising safety and ride requirements. High ductility enables the steel to be formed at room temperature and effectively absorb energy upon impact.

This combination of performance properties has, however, been difficult to achieve as historically these two attributes are paradoxical. NanoSteel solves this challenge by using standard elements in conventional steel but in unique ratios in order to create nanoscale microstructures. These nanostructures are the basis for the steel’s compelling mechanical and physical properties that enable combinations of both high strength and ductility. The NanoSteel automotive sheet steel can also be produced on existing manufacturing equipment and processes, without changing the way the material is cast, worked, and rolled.

The company’s technique was born from experimentation in the federally-funded Idaho National Lab, where, for six or seven years, the work that would become NanoSteel was a Department of Energy and Department of Defense-sponsored program. According to Parsons, the sheet steel product generated as a result of this early technology development could change the field of automotive light-weighting.

When NanoSteel started as part of the Idaho National Lab, researchers worked on a material that could be sprayed or welded onto a substrate in order to make it more wear resistant. This was useful in highly corrosive, highly abrasive-intensity environments such as oil & gas drilling operations and power plants. Once spun out of the national lab in 2002, NanoSteel commercialized this metallic coatings business across several industrial markets. A number of years later, Founder Daniel Branagan discovered that he could translate some of the technology developed for metallic coatings, in addition to some new metallurgical developments in the area of increased ductility, into making sheet steel for automotive purposes.

Parsons says that staying out of the public sector was an advantage to NanoSteel at the company’s inception and in the early years of development. “We were just developing our own steel in a little lab out in Idaho with some very strong metallers,” he says. He believes this accelerated the company’s progress in a way that would have taken years longer in the public sector.

Parsons also notes that the steel industry overall is experiencing a bit of a renaissance.

“The first 80 years of steel in cars was a slow progression,” Parsons says. “The last 20 years have been a very, very rapid development of different grades of steel, taking the basics used over previous generations and trying to incrementally improve.”

The German design house EDAG conducted a study to compare a conventionally built 2011 Honda Accord, a custom-built lightweight vehicle made from reverse-engineering the Accord with lightweight techniques, and a simulated version made entirely of NanoSteel’s automotive sheet steel. The NanoSteel structure generated a 30 percent reduction in mass compared to the Accord, while the lightweight version saw a 22 percent reduction.

The test car was made using three different grades of NanoSteel’s AHSS. N1 Grade offers high formability and was used for the external body panels (although it has not yet been validated for the ability to create Class A surfaces).

N2 Grade, used for its high work-hardening capability, was used for the crash rails and floor structure since it enables a large amount of energy absorption (and therefore safety) during a crash. The N3 Grade, which had the highest strength, was used for the roof and the body side structures that protect the passenger compartment.

EDAG says that the NanoSteel-intensive vehicle showed that the steel was “well suited for high volume mass-market vehicle platforms” and offered “comparable weight reduction” to aluminum.

“Look at the use of steel over the last 30 years,” Parsons says. “How many grades were there 20 or 30 years ago versus the hundreds of grades in the market today? Thirty years ago there were less than 10. I think automakers realize that different steels have different characteristics and can be used in different ways. NanoSteel is truly embracing the opportunities to work with the automakers and find opportunities for performance improvement and light-weighting.”

Of course, as part of a business, Parsons now wants to get NanoSteel sheet steel product into the hands of more customers, especially those in the automotive sector. Currently, the company is finishing up its production trials. Once these are completed, Parsons and his team will provide material to GM and other OEMs for initial qualification and validation for their designs.

He says that one of the things that is most appealing about nanostructured steel is that it can be processed on the same supply chain, equipment, and manufacturing lines as conventional steel. In order to use aluminum or composites, factories have to change everything from where they get their material to sorting and scrap handling. Vehicle manufacturers are already set up to handle steel.

Parsons says that his company has approached and successfully engaged a good number of the major automakers.

“It just shows how well some of the developments from the military, governments, and Department of Energy can benefit mankind,” Parsons said.

This article originally appeared in the January/February 2016 print issue of PD&D. The online version has been edited for accuracy.