A special formula for epoxy resins has been developed at TU Wien, which can be used for fibre-reinforced composites in aerospace, shipbuilding and automotive manufacturing, or even for underwater renovation. This is achieved merely by irradiating any part of the resin with light.

Within seconds the new material can be completely transformed. Initially, the material is transparent and either in liquid or paste form; then, when any part of it is irradiated with the appropriate light, the entire resin begins to solidify and takes on a dark colour. The special epoxy resin formula that makes this possible has been patented by TU Wien. Now, researchers have even successfully carried out the process underwater. This means that the new epoxy resin can be used for jobs that, up until now, had been very difficult to carry out, such as filling underwater cracks in bridge pillars or dams, or repairing pipes during ongoing operation.

As a further novelty, the special formula can be applied in combination with carbon fibres and carbon fibre mats. Many possibilities arise for applications in aerospace engineering, wind turbines, shipbuilding or automotive industry—in every field where highest mechanical properties need to be combined with lightweight design.

Ordinary material with an extraordinary addition

Epoxy resins are standard materials that are used in the industrial sector for many different purposes, such as insulating electronic components or securing mechanical parts. The research group headed up by Professor Robert Liska (Institute of Applied Synthetic Chemistry, TU Wien) develops additives that are added to ordinary epoxy resin in order to adjust its properties and enable targeted curing at the touch of a button.

“We are developing special compounds in which light triggers a chemical reaction”, explains Robert Liska. “This can be a bright flash of visible light, but we also have compounds which only react to UV light.” At the point where the light strikes the resin, a reaction is started that releases heat. This heat spreads and initiates a chemical cascade elsewhere until all the resin has been cured.

“The key advantage of this method is that it isn’t necessary to illuminate the entire resin as with other light-curing materials”, explains Liska. “It’s sufficient to irradiate any part of the resin with light. The rest then cures even if it’s situated deep in a dark crack that you want to fill.”

Partner companies from industry have enquired whether this process would also be possible in presence of “dark” fillers or fibres as self-curing epoxy resin would be extremely useful for some of these more difficult applications. “On the surface, this idea contradicts all theories”, thinks Liska. “The light has a very low penetration depth into the material because it is strongly absorbed by the carbon fibres”, still experiments at TU Wien impressively showed the working process.

Also the efficient underwater curing contradicts the theory. “Initially we didn’t think it would be possible. One would first expect that the water would chemically react with the components of the resin, and also that it would remove the heat required to sustain the reaction.” Surprisingly, however, it was still possible for the light-triggered self-curing process to take place underwater. 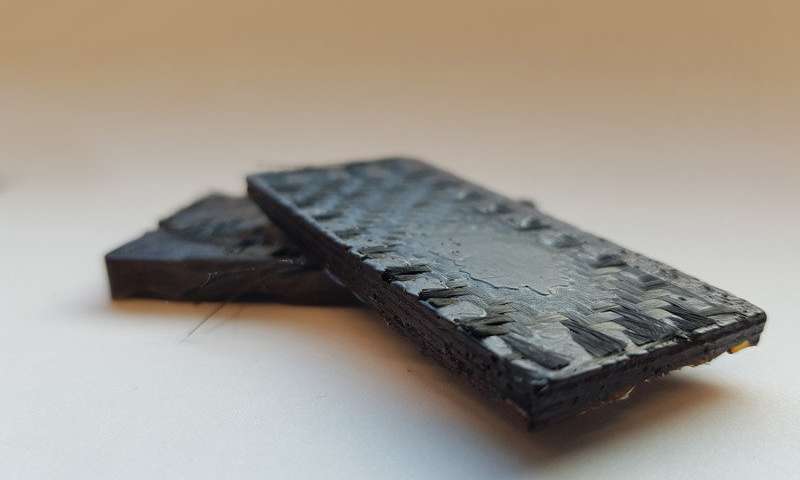 Carbon fibre mats can be used with the new epoxy resin. Credit: Vienna University of Technology

“A key reason for this is that the chemical reaction brings the water to the boil”, explains Robert Liska. “A thin protective layer of water vapour then forms between the hardening resin and the surrounding water.”

Researchers are now looking for further users from industry to explore the potential of this special resin. Besides the application of glass- and carbon fibre-reinforced composites in aerospace, shipbuilding and automotive manufacturing, the restoration of buildings is a particularly interesting area. For example, you could fill cracks in buildings that are built in water with viscous resin and then cure them with a flash of light. The maintenance of pipelines is another job that is often difficult to carry out – the use of the new resin could also be suitable here. “There are many possibilities and we are hoping for some interesting new ideas”, says Robert Liska.