Free CAD software shouldn’t have to break the bank.

There are thousands of kinds of free CAD software available. Possibly tens of thousands. But there are far fewer free programs in the CAD realm—if only because CAD software is incredibly difficult to create.

Here are three free CAD software programs that offer something really special. They’re each from major software developers who sell commercial grade 3D MCAD software. These vendors, of course, hope that you’ll love the software they’re giving away, and will buy their commercial software—but they’re not playing the “let’s give away useless software” game. This free CAD software is good stuff. If you try it, you’re going to like it. 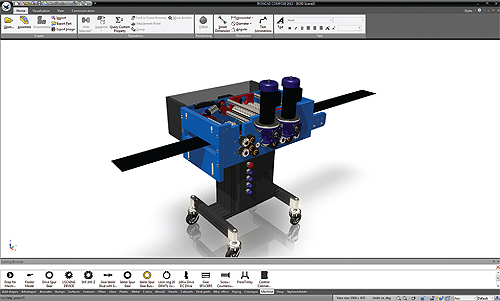 IronCAD COMPOSE lets you build up assemblies by dragging and dropping individual parts from catalog files. These assemblies can be animated, rendered or exported to 3D PDF format.

That’s the simplistic explanation of how IronCAD COMPOSE works. The important question is this: What can you use it for?

Quite a variety of things, it turns out. You can use it to create assembly instructions and animations for your factory. Your sales people can use it to create customer presentations of configure-to-order products. You can lay out your office, or your assembly line, or most any other space you’d like, in full 3D. And other people in your organization can use the IronCAD viewer to explore those compositions. Or, if you prefer, you can save your compositions as animation files, rendered images, or 3D PDFs, and put them up on your website.

IronCAD COMPOSE is also free. You can download it from IronCAD’s website, and you don’t need to pay anything.

IronCAD COMPOSE is essentially a CAD program for creating assemblies of assemblies. It has all of the parts creation tools removed. It works with existing parts and assemblies, and lets you compose what are essentially digital mock-ups. Out of the box (so to speak), it can read a variety of faceted 3D formats, including STL, VRML, 3D Studio, AutoCAD 3D DXF, TrueSpace, and Wavefront (OBJ). No matter which CAD systems you’re using, you should be able to create one or more of these formats. If you prefer to work with live CAD files (as I do), for $195 IronCAD will sell you a translator (COMPOSE Trans) that’ll read native files from ACIS, PARASOLID, IGES, STEP, CATIA, Pro-E, Unigraphics, SolidWorks, and Inventor. That’s the only “catch” to IronCAD COMPOSE’s free price.

Once files are imported into IronCAD COMPOSE, you can add attachment points on them (to allow smart snapping between parts), and, if you like, save them in a catalog, for later reuse. COMPOSE includes several sample catalogs of parts, finishes and textures. The program is entirely drag-and-drop, push-pull. To lay out a conveyor, for example, you just open the conveyor catalog, and start dropping parts and sub-assemblies into the scene. When you drop one part onto another part, they automatically snap together in the proper orientation, based on their attachment points.

A good example of a company that uses IronCAD catalogs is Skyline Displays, a well known supplier of trade show exhibit furniture. Skyline has taken the CAD models of its products, and saved them as IronCAD catalogs. Using IronCAD COMPOSE and those catalogs, almost anyone could snap-together a custom Skyline trade show booth in no time flat.

Skyline has been using IronCAD, and creating catalogs with it, since about 2004. But, they haven’t actually been using IronCAD COMPOSE. First, because COMPOSE only came out in May of this year, and second, because IronCAD wouldn’t be nuts enough to put everything Skyline needed (for example, a quotation system and an interface to ERP) into a program that they were giving away for free.

IronCAD did, however, put enough capabilities into COMPOSE that it’s a useful and flexible tool for a lot of ancillary jobs that typical CAD systems aren’t really appropriate for.

As you might imagine, IronCAD is hoping that a lot of people will use COMPOSE for interesting projects, and will start liking its drag-and-drop method of operation. If that happens, a certain number of people are going to take a look at IronCAD, and realize that it’s a pretty interesting tool—even working along side other CAD systems.

AutoCAD Inventor Fusion
Not many companies give away really competent solid modeling free CAD software. Autodesk won’t be giving away Inventor Fusion forever, but for at least until next April, you can download a copy from Autodesk Labs, and enjoy using without going out of pocket even a single cent.

Inventor Fusion is a “technology preview.” It’s Autodesk’s attempt to grab not just the attention of their existing users, but those of their competitors as well. Inventor Fusion is what is generally called a direct modeling CAD program. It doesn’t require the use of history-based parametric features. Rather, it lets you edit most any 3D CAD files—solid or surface—without the need to understand how they were built, or even what CAD system created it. Inventor Fusion supports reading an exceptionally wide array of 3D CAD formats, including those from most of the major players, including CATIA V5, NX, Pro/E, SolidWorks, Alias, Parasolid, ACIS, STEP, IGES, and even Rhino. About the only important 3D CAD formats it’s missing are JT and 3D PDF. 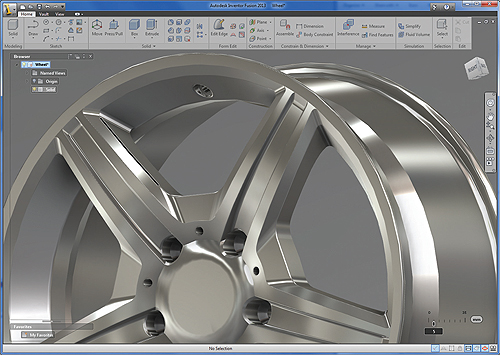 While Inventor Fusion is designed to work in conjunction with Autodesk Inventor (the non-fusion version), it stands on its own merits, in three particular areas.

First, Inventor Fusion has a well-refined interface. It doesn’t spread your attention all over the screen. Rather, it keeps the information you need near where you’re working. Its selection tools are nicely done, and its sketching and modeling tools are context aware. Overall, it’s a far nicer user interface than most CAD users would expect.

Second, Inventor Fusion has capable tools for modeling and editing both solid and surface models. While, in my experience working with Inventor Fusion, I found some files that I was unable to edit as I wished, my sense was it was more a matter of my lack of experience than Inventor Fusion’s limitation.

And, third, Inventor Fusion includes a couple of tools that make it really interesting for preparing models for CAE. It has a model simplification wizard, to remove small features, and has a wizard to create fluid volumes from assemblies, for CFD. There’s quite a bit of interest among CAE people in using direct modeling CAD systems for model preparation. Autodesk has bought several CAE companies over the last several years, so it makes sense that they would include these tools in Inventor Fusion.

When Autodesk gets around to charging for Inventor Fusion, they may include more with the software, or, more likely, bundle it with some of their other products. For now, as a standalone product (and one that’s free as well), it has a prominent place in my collection of tools.

Solid Edge 2D Drafting
Some day in the future, it will be common for engineers and designers to create 3D models, and annotate them with 3D GD&T. And never create drawings. But for now, we all love our drawings.

The good 3D MCAD systems all support the semi-automatic creation of drawing views from 3D models, as well as model-to-drawing associativity of dimensions. But there are times when you need to create just a drawing. Without an associated model. 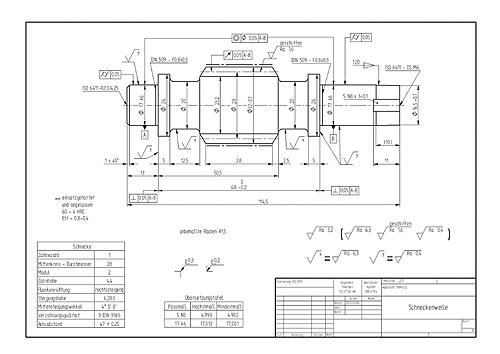 Sometimes it doesn’t make sense to create a 3D model when a 2D drawing will do the job. Solid Edge drawing of a worm shaft, courtesy Thorsten Hartmann.

The most common 2D CAD software is AutoCAD. In its various incarnations, it’s the most popular CAD software in the world. It is certainly good general purpose CAD software, but it’s never been the best mechanical drafting software you could get. For really good 2D drafting software, you need to look for a CAD product with a heritage that can be traced back to the days of the Apollo space program, when Huntsville, Alabama was the epicenter of rocket research in the United States. That product is called Solid Edge. It was conceived and created in Huntsville, and to this day is still developed there.

It probably wouldn’t matter If Solid Edge 2D drafting were junk. But it’s far from it. It does all the things you’d want in a really good 2D drafting program: It supports parametric drawing layout, complies with an alphabet soup of international drafting standards, including ISO, ANSI, BSI, DIN, JIS and UNI, and is compatible with the ubiquitous DWG format, used by AutoCAD and most other 2D CAD programs. But it has a few bonuses too.

One nice bonus is support for drag-and-drop diagramming for elecrical schematics and P&ID diagrams. Another is Goal Seek, a function that combines free-body diagrams with a 2D parametric sketch solver. Goal Seek is one of the best kept secrets in Solid Edge 2D Drafting. It’s a true design engineering tool, and its results can be used to drive parameters in your 3D CAD system.