What is driving the Internet of Things (IoT)?

“Really two things,” said Gil Reiter, strategic marketing manager for the Internet of Things at Texas Instruments. “From the user’s side, the IoT brings several benefits. A technician can use a standard phone or a tablet to wirelessly control industrial equipment in an innovative and very easy way. But the main drivers are the businesses that are showing new use cases that allow them to improve their manufacturing time, sell more products or sell more services and take their expenses or energy consumption down.” 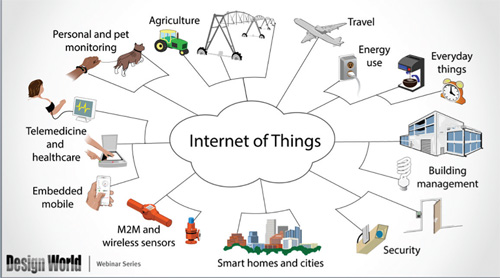 “The benefits that we’re seeing,” said Matt Newton, regional sales manager, Opto 22, “is pushing intelligence down into edge devices. This capability allows those edge devices to preemptively take corrective action to prevent equipment failure and keep production lines up and running. For example, we came across an interesting application in Mexico where a production engineer wanted to add intelligent monitoring and control to his injection-molding machine. We designed a device that monitored the viscosity of the machine’s pump oil. If the oil gets too dirty, it’ll automatically take itself offline, email the management team and log a trouble ticket with maintenance operators.”

So then, what is the difference between the IoT and Machine-to-Machine (M2M) communication? “I’ve been asked that many times,” said Reiter. “M2M is really focused more on connecting between many machines in a closed system while the IoT is more about fully harmonizing the way people and machines get connected through a common public service in the cloud.”
A typical flow of information in an IoT application starts with a sensor that senses some physical parameter. The information is stored in the cloud and presented on a user interface, or sometimes it’s analyzed in the cloud and action taken based on the analysis. The result of the analysis (a command) is sent to an actuator that sometimes sits on the same physical device as the sensor. “What we’re doing is pushing that intelligence down into the device so it can monitor itself and alert operators before a problem occurs,” said Newton.

The IoT is viewed as an enabling technology for many markets, which will benefit from easily sharing data. One in particular is the medical market. Imagine doctors at the CDC who are monitoring flu outbreak. Because the big data are shared quickly across the Internet or the Internet of Things, more people can look at that data and make better decisions. For example:

“If you boil down all of the benefits and applications, what we’re really seeing today is an entirely new paradigm,” said Newton. “It’s no longer going to be about how fast a business can react to events that are occurring. With IoT and big data, real time insight into every aspect of a businesses’ operations can be saved, and using that data, anticipate the events before they occur to achieve the largest competitive advantage in the market place.”

The challenges of the IoT

“The Internet of Things has several challenges,” said Reiter. “The main challenge we’ve seen is sensing. But there’s also a need for multiple connectivity options and power consumption choices. In addition, security is critical, and there’s the fact that IoT systems are complex.”

Sensing is complex partly because there are a number of ways to sense the physical environment and deliver information through microcontrollers and wireless or wired connectivity.

Then there is the challenge around connectivity to the Internet. “TI has 14 different wireless technologies that are available through multiple TI devices,” said Reiter. 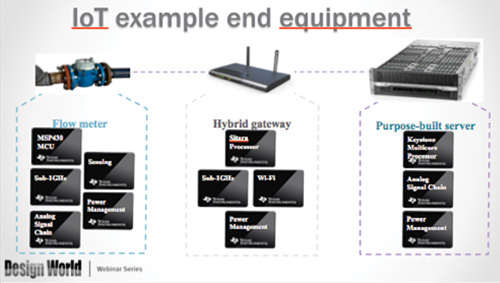 A challenge for the IoT is the complexity of designing for this capability. Often, designers need to blend hardware and software design philosophies, then determine how to communicate to these disparate systems.

Agreed Newton, “Probably one of the biggest hurdles is: How are we all going to speak the same language? Right now there’s a lot of disparate systems out there. Vendors all use different protocols to communicate. It could be a problem—making sure things know how to talk to each other—when we’re talking about interfacing multiple systems together across the Internet.”

Power consumption is going to be a challenge. Many IoT applications run over batteries.

Security is critical. “I cannot stress enough how critical it is,” said Reiter. “What’s needed for a good IoT application is a ‘how to enable the security engine’ feature.”

Nearly every IoT connectable device will need at minimum authentication and encryption, noted Newton. While SSL is popular, it too is hackable.

“The most widely adopted authentication method in IoT, at least that we’re seeing today,” added Newton, “is called OAuth. It’s designed to solve that problem of verifying that one thing on the Internet of Things is actually communicating to that thing that it thinks it’s communicating to.”

Another option for authentication is API Keys.

Next is the complexity of the IoT. Designers need to blend hardware and software design philosophies, then determine how these disparate systems will communicate with each other across the IoT, leveraging existing technologies, standards and architectures available today. One step in that direction is pre-certified RF modules and on-chip software stacks, such as those available through TI.

A cloud service is a key element of an IoT application. But there are no standards in the industry for cloud connectivity. “Pre-integrated silicon to a cloud service can help you build IoT applications end to end more easily,” said Reiter. “From a silicon standpoint, what the cloud really cares about are the APIs that allow the physical device to communicate with the cloud service to deliver gathered information.”

The Personal Area Networking (PAN) protocols popping up will most likely have to connect to a gateway that will connect to Ethernet or WiFi. Thus, you will also need a TCP/IP stack. “It’s very important which stack you go with,” said Newton, “some are a little buggier than others, but you’re definitely going to need an IP stack to move things around on the Internet of Things.” 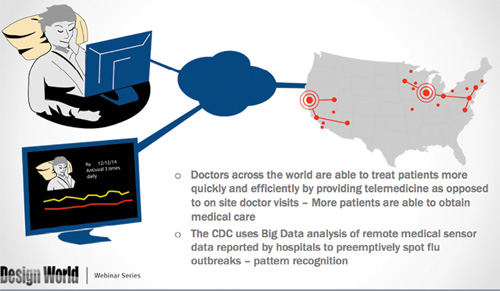 The Internet of Things is an enabling technology for many markets. One in particular is the medical market. Imagine doctors at the CDC who are monitoring flu outbreak. Because big data are shared quickly across the Internet, more people can look at that data and make better decisions.

As for application interfaces, Opto 22 is targeting APIs based on the RESTful architecture. REST APIs stands for REpresentational State Transfer and it’s an architecture that makes use of widely used protocols like HTTP and HTTP/s, which are frequently used across the Internet. REST is going to allow for these disparate systems that are connected on the IoT to actually know how to communicate with each other, communicate, send data across the Internet and perform tasks that will be meaningful from a business perspective.

“It’s basically a directory of how to communicate with other devices on the Internet of Things,” said Newton, “and we believe those APIs will be the key to moving data from an embedded development platform that uses something like the C programming language to interact with the IoT.”

Connected cars can generate up to 300 MB of data per second per car. You can quickly run out of bandwidth when moving that data across the Internet. And the price of bandwidth is not going as fast as the price of storage and compute power.

One idea is to push intelligence to the data source so that those sensors and control systems are collecting data at the network edge. Thus, sensors and edge devices will need microprocessors. Intelligence will help designers parse out the data and reduce the amount of data sent to the cloud or to the file system or on the network. A number of devices are already doing this. 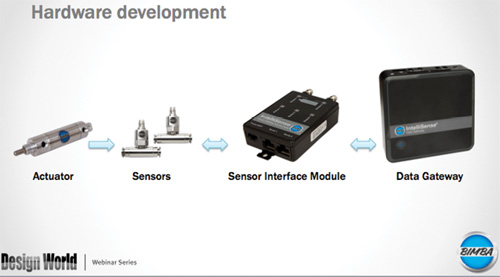 Sensors and edge devices gathering data will need microprocessors to analyze the data. At each point in the data collection, intelligence can help parse the data and reduce the amount sent to the cloud, or to a file system or onto a network.

How to make a cylinder IoT compatible
Bimba Manufacturing used many of these principles and actions in the development of its edge device, noted Jeremy King, Intellisense Product Marketing Manager. “Several years ago, we saw that we would need to integrate our cylinders with new technology.”

One of the key steps is to evaluate what resources and skill sets you already have, and what ones you might need in order to develop products compatible for the IoT. Bring in the right people early. In Bimba’s case, one of the skill sets needed involved security.

Then, determine what data customers might want or need. “We wanted a device that would be easy to add on and enhance the capabilities of customers’ existing equipment,” said King. “That’s when we went with two in-line pressure sensors on the in line. Those sensors are creating more than 2,000 data points every second; 1,000 bit pressure readings and one temperature reading from each sensor every second.”

To accommodate all the gathered data, Bimba engineers built the Sensor Interface Module. It was designed as a data acquisition tool with processing power to do analytics on that data. (Depending on the application, you will need significant “horsepower” to implement all the analysis functions on your device.)

King noted that Bimba has 100 GB available space on a hard drive and a built-in web server that serves up all of the information from its sensor interface module. The hard drive and server receive more than 100 GB within a month. “We realized that as the average customer, the maintenance guy, won’t have time to dig through 100 gigs of data, and the operations manager doesn’t have time to sit down and analyze 100 gigs of data each month. It’s important when you’re developing a device for the Internet of Things that you’re providing more than data. You really need to provide actionable insights into what your customers can do with that data.”

And once the customer has new insights, be prepared for the new requirements he will have.

Material for this article was compiled from presentations given during the Design World webinar, “Tips on designing for the Internet of Things,” held in December 2014. You can find the webinar at www.designworldonline.com/category/webinars