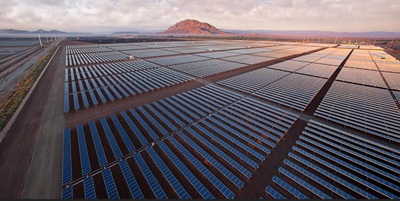 Quotes for very large solar photovoltaic projects in sunny parts of the United States are coming in at an astounding 5 to 6 cents per kWh. Certainly these projects enjoy economies-of-scale advantages compared to smaller or rooftop photovoltaic projects. There is, however, one other very important technology advantage—because the utility-size systems are ground mounted, trackers can be used to follow the sun throughout daylight hours. The advantages of trackers are dramatic, often increasing annual power production 20% compared to “fixed” (or non-moving) mounted systems. For most states in the lower 48 states, trackers will more than make up for their modest increase in upfront costs over the lifetime of a system, often leading to the lowest levelized cost of electricity (LCOE) in projects. Not only is annual production increased but also tracking systems produce more power during peak demand hours compared to “fixed” mounted systems.

Tracking the sun can lead to significant advantages

Very large PV projects are ground mounted, presenting a basic question for a utility, which is whether to use a fixed mounted PV system or a system that tracks the sun during the day? Key considerations include the total annual electricity production and the amount of electricity produced during hours when electricity demand is at its highest (“peak” hours).

PV Watts, available at http://pvwatts.nrel.gov/pvwatts.php and provided by the National Renewables Energy Lab (NREL), is a useful tool for examining the tradeoffs involved. The software predicts the power produced from a PV system under various configurations. If a sunny location, like Albuquerque, New Mexico, is selected, the software indicates a single-axis tracker would produce about 20% more energy compared to the same size (Wdc), optimally oriented/tilted fixed PV system. But the story is deeper than that. A tracking system will also produce more energy when a utility most wants it – when electric demands are at their peak.

Take for example the following hourly simulation of power production on a July 23 day in Albuquerque, New Mexico. The maximum production in hour 14 was set to 100 MWh. Notice how much more the tracker is producing during “on-peak” hours 8, 9, 10, and hours 15, 16, 17 compared to a fixed mounted PV system. In hour 13 the tracker and fixed system are forecasted to have nearly the same output because they are essentially operating at the same orientation at “solar noon.” There was also a cloud event in that hour which would diffuse the sunlight. Which raises a point about fixed versus tracker systems—the benefits of trackers can go down in areas where sunlight is scattered due to clouds. Trackers typically add 2 to 10% additional upfront costs on large, utility-scale project. Recouping that added investment is certainly location dependent, but, generally speaking, single-axis trackers produce about 20% more energy compared to fixed mount systems just about anywhere in the U.S. However, the amount of annual energy produced in a cloudy location like Seattle is only about 60% of a sunny area like Albuquerque, which will greatly impact the economic tradeoff analysis.

One hurdle for trackers is an outdated perception of added maintenance requirements or lack of reliability. But that is an image of the past, as more mature tracker manufacturers are reporting 99.99% uptime with gigawatts of installations under their belt. Some recent innovations include simplified designs having fewer motors, self-calibration, and no required routine maintenance.

The utility-scale PV market is taking off

Turn the clock back just five years and solar power was largely viewed as a curiosity in the utility industry   Solar costs were multiples higher compared to its renewable competitor, wind energy; so high in fact that some states made “special” carve outs for solar in their renewable portfolio standards (RPS) so that solar would not be left out.

What a difference five years makes. The install cost for solar has steadily dropped, positioning solar to be the lowest cost renewable energy source available for many parts of the U.S. The following “cost per watt (AC)” graph was generated from Go Solar California, which has a database of all customer-installed solar projects available at https://www.californiasolarstatistics.ca.gov/reports/quarterly_cost_per_watt/, illustrating the dramatic drop in the install cost of solar. Notice since 2007 the install price for smaller PV systems (under 0.5 MW) has dropped from around $10 per Watt AC to around $5. The cost for medium size systems (0.5 to 1 MW) are about 60% that of smaller systems around $3 per Watt AC today. Even larger PV tracking projects over 25 MW in size are now being installed for under $2 per Watt AC.

With the drop in solar costs, installations have soared. According to SEPA, the US market for PV ballooned to 6 GW in 2014, more than six times what it was in just 2010. The good times are expected to continue with a forecast of 12 GW of PV installed in 2016, representing a “gold rush” to take advantage of expiring federal tax credits. The soaring growth has in large part been driven by utility-scale systems, whose annual installations increased from near 0 GW in 2009 to 4 GW in 2014, and are forecasted to be around 7 GW in 2016.

2017 may, however, see a dramatic drop in the PV market size as the federal tax credits will be lowered unless the current law is changed. Hopefully solar will continue its downward trajectory in costs to offset the reduction in the tax credits. With the continued improvement in performance and cost of all major components including modules, trackers and inverters, it appears utility-scale solar is here to stay and is positioned to be a very competitive source of electricity going forward.