The students say two mounds in the park channel strong wind flows. The 720-ft long Scene-Sensor would intersect the flow and produce a shimmering spectacle that captures its energy with a metallic mesh containing piezoelectric wires. Visitors could also generate electricity by walking on a nearby bridge, activating ground piezoelectrics.

Scene-Sensor would use an estimated 208,000 small reflective panels to capture the wind. Each would be embedded with piezoelectric wires, which convert mechanical energy to electricity when stretched. Scientists aim to produce energy-generating textiles with this technology, but the students believe it could be applied to a larger framework. In this case, the wires would bend as thousands of metallic panels fluttered in the wind. Such a design would require less air movement than conventional wind turbines. 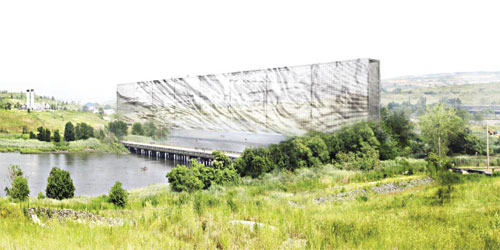 Q&A with Murray and Vashakmadze:

Q: Is this primarily a work of art or a way to create electricity?
A: It’s always been about making an audience realize how the two can work together, combining an artistic imposition with the pragmatic necessities of renewable energy generation, creating an art installation out of generating electricity. Scene-Sensor maps and illuminates flows of both people and ecologies of Freshkills caught within and between, and shows the energy potentials that they each carry.

Q: What would the metallic mesh be made from—and how reflective is it?
A: We decided to use a flexible, woven steel substrate for the piezoelectric wires, as it would be efficient for energy gathering and would also give us the best reflective quality a mesh can produce. An individual panel would reflect the basic colors of its surroundings but as a screen, the matrix of panels intends to act as a mirrored mirage of the fluctuating environment of Freshkills.

Q: How would you describe the way the panels and wires interact with the wind to create energy?
A: The wires would be embedded in the panels, woven within the steel of the mesh, and would bend as the it fluttered in the wind. It is this compression and expansion of the material from the bending that would be translated to electricity. The advantage to normative systems would be that such a small scale panel needs much less wind to begin creating energy. It could work from minute fluctuations in the air currents, while other methods of harvesting wind energy need a higher threshold to begin to function [a cut-in speed needed to start moving the turbine].

Q: Piezoelectic energy is often employed in small-scale projects. Is there any evidence that a large-scale project like Scene-Sensor would function in the way you propose?
A: The research currently being done [at Georgia Tech, among other institutions], is working mainly toward finding ways of incorporating the piezoelectric wires into fabrics, working toward a goal of energy-producing textiles. It would definitely need to be done at a small scale, but the promise of the Scene-Sensor is that it can take such small scale operations and assemble them into a larger framework. So it would not be about the scalability of the technology, but about the scalability of the supporting structures. Operationally, it would be a network of many small-scale generators, assembling into a whole that is more than the parts. 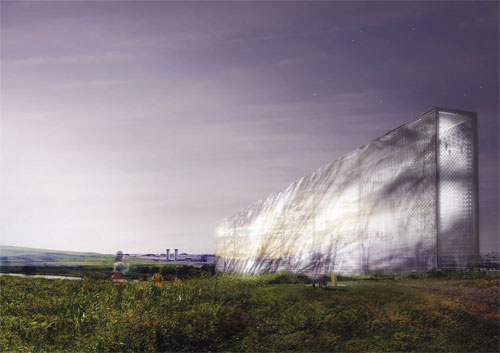