The Sutrue device was prototyped with the help of the Form 1+ SLA 3D printer. (All image credit: Sutrue)

Manual surgical suturing is a tedious and time-consuming process. For suturing that is currently done by hand, there is an unusually high number of needlestick injuries – where the used needle pierces both the protective clothing and skin of a medical practitioner – that occurs globally. These injuries have a profound impact on health systems and clinical staff.

To combat this issue, Alexander Berry, Sutrue director and founder, developed an automated suturing device to streamline and create a safer suturing process.

“Nine and a half years ago, I watched a documentary on suturing techniques used during robotic surgery using forceps and considered there might be another way of completing the process,” explains Berry.

He immediately began designing a solution that could nearly eliminate the risk of needlestick injuries.

About six years ago, Berry persuaded a small group of friends and family to invest a nominal amount of funding to allow for patent applications, further development of the design, and eventually a working prototype.

The Sutrue device is the result of years of designing, prototyping, and testing. Designed as a mechanical stitching tool for doctors, surgeons, veterinarians, and dentists, the device contains the needle section of the suture within an enclosed plastic cartridge to help avoid most injury situations.

There are currently two versions of the handheld device, one with a 26 mm needle and another with a 48 mm needle.

3D Printing to the Rescue

Berry’s Sutrue device comes in two handheld versions, one with a small 26 mm needle and another with a larger 48 mm needle. In the next phase of development, Berry plans to expand this range to five handheld and two endoscopic needle sizes for keyhole surgery.

“In doing this we have developed a product we think also allows doctors and surgeons to close wounds faster and more accurately, alongside the minimal risk of accidental injury,” explains Berry. “Because of its ease and simplicity of use, the device opens up automated general suturing to the wider medical community.”

Originally, Berry and his team made a few non-functioning models from various materials lying around to get an idea of the device shape they wanted. Then, they created a layered prototype from laser cut mylar.

However, the team eventually started prototyping using 3D printing thanks to a partnership with Dr. Chris Sutcliffe at Liverpool University.

“He printed our first few prototypes on an SLM machine in steel and titanium until we finally found the mechanism that would allow the device to work consistently and with sufficient force,” says Berry.

At that point in the prototyping process, Berry had gone through about 15 different designs, with several thousand hours spent on alternative configurations to figure out how to consistently grip the needle.

The design team then switched to a combination of SLM, SLA, and SLS printed parts from a few different bureaus, and they used laser cut or chemically etched plates for the springs. These components were mixed with commercially sourced gears and shafts, which led to the first working Sutrue models.

After seeing firsthand how 3D printing expedited the prototyping process, Berry decided to purchase his own SLA 3D printer, the Form 1+ from Formlabs.

The Form 1+ gave the team a chance to relax more during the design process. “If you are waiting five to 10 days for parts from a bureau, you often find that you have moved the design in that period to such a degree that the parts arrive and are no longer valid,” says Berry. “Or you try and over design the part with various options, which takes more time.”

According to Will Walker, Formlabs’ senior marketing designer, both Sutrue and the medical prototyping industry are using low-cost prototyping to test more products, faster. “It’s an exciting time to watch the industry, because the barrier to trying new ideas is lower than ever before,” he explains.

The Sutrue device uses several sets of tension rollers to drive the needle.

Although the Form 1+ expedited the prototyping process, Berry and his colleagues did run into a few design challenges.

Engineering 101 says that gears should be at a set distance apart. The smooth running of gears relies on this precise distance and mechanical designs must take this into account.

“It took several years and a few prototypes to realize that although that tenet is true, with slow running gears you can change that separation distance ever so slightly,” says Berry.

So, he designed a system where the gears used to drive the rollers, which themselves drive the needle, sit on a sphere and are controlled by a perpendicular spring plate. This allows fractional rotation on the z-axis and tension between the rollers and needle that drive it through the tissue.

In order to verify that Berry’s design was viable, he enlisted the help of a surgeon from the Royal Brompton Hospital in London, Dr. Richard Trimlett. Dr. Trimlett has been helping the design team for nearly six years, not only on the user perspective, but also on the engineering side as well.

“[Dr. Trimlett] has been instrumental in understanding what the end user would require for the best application of the device and has performed all our trials and tests,” says Berry.

All of the device’s testing has been performed on a custom rig to verify the amount of power the team can generate behind the needle tip. Dr. Trimlett then performs the trials with a series of tissues, such as a heart or artery.

The tissue trials allow engineers to examine whether the Sutrue device does indeed provide advantages over suturing by hand. Aside from the prevention of needle-stick injuries, Berry and his team believe the device will speed up suturing, because the needle can be driven in a full circle at speeds up to once per second, and there is a backwards option in case of mistakes or misalignment.

In addition, the device provides a constant angle of rotation with no variation, essentially eliminating the variation in placement attained by manual stitching. 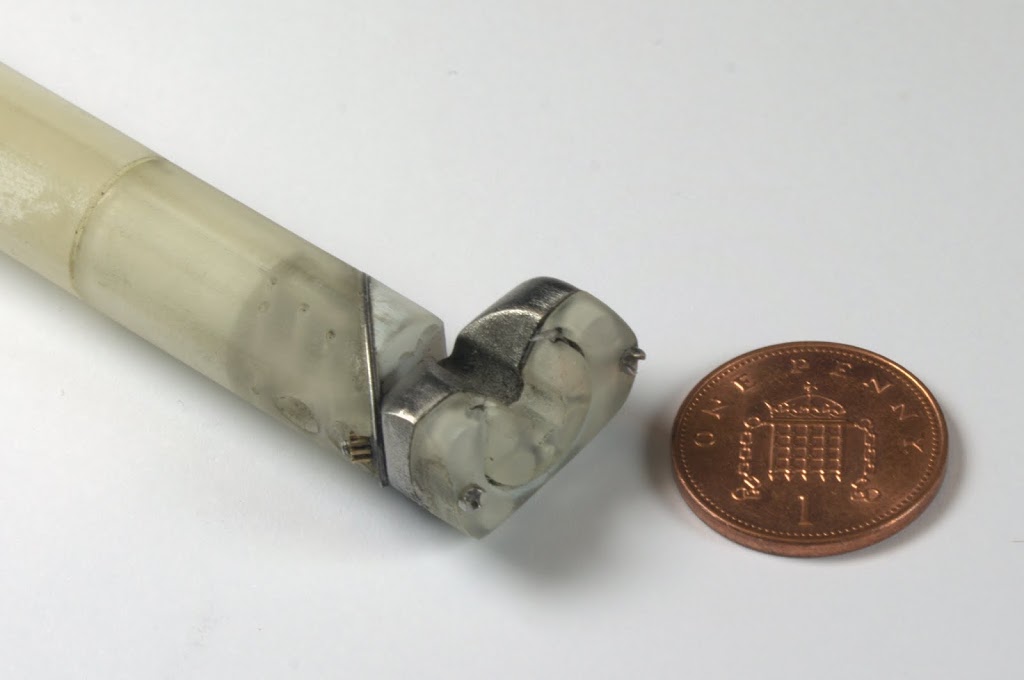 Alex Berry and his team just finished prototyping an endoscopic version of the Sutrue device.

Berry believes that the simplicity of the Sutrue device will permit a greater number of clinical staff to be trained in suturing, allowing it to be practiced in a broader range of clinical settings – not just in hospitals and emergency situations.

The team also wants to take the automated suturing technique into the realm of endoscopic keyhole surgery. In fact, Sutrue just finished prototyping the endoscopic version of the device, which the company plans to test as early as February.

“For endoscopic or robotic suturing, although there are currently devices that can suture, they all have bespoke needles and don’t emulate how a surgeon normally turns a needle during manual suturing,” says Berry. “We foresee our device being available for more procedures using more than one type of needle if necessary.”

While both the external and endoscopic Sutrue devices benefited greatly from 3D printing in the prototyping phase, it’s time to move on to the materials phase of development. Berry and his team must find materials that are biocompatible and suitable for human trials.

However, he recognizes that the Sutrue devices would likely never be possible without the use of 3D printing.

“There is so much that can be designed and modeled using 3D printing in both plastics and metals,” muses Berry. “If it’s possible in the physical world, then it’s possible to print.”

This article originally appeared in the January/February 2016 print issue of PD&D.