While efforts to overcome COVID-19 show progress, one group that is still unvaccinated today is children.  Many families still need masks to protect their kids. Kevin Ngo designed a respirator mask specifically for children. With the help of an Artec Eva 3D scanner, 3D printing, liquid silicone rubber co-molding, Artec Studio, Pro Engineer, and Rhinoceros software, this dad invented a respiratory mask to protect children against viruses, and once the pandemic is no longer a threat, against the air pollution that his kids encounter. Ngo lives in Silicon Valley, an area where smoke from wildfires that blaze across swathes of western USA is not uncommon.

Ngo spent two years developing this mask, called the Flo Mask, and built a business to support it, Air Flo Labs, LLC.  The Flo Mask is a next-gen reusable, sub-micron filtration respirator mask for children. Its strength lies in its unique filter and tailor-made gasket, engineered to perfectly fit children from 4 to 12 years of age. Made in the USA, these filters trap airborne particles down to 0.1 micron. Independent tests by Nelson Labs showed that Flo Mask filters block more than 99.8% of viruses, exceeding FDA (U.S. Food and Drug Administration) breathability standards by 600%.

The Flo Mask project began to take shape in the summer of 2018, the deadliest and most destructive wildfire season on record in California. By 2020, it was especially bad.

“The kids would return home from school feeling nauseous, and have really bad headaches. The school even emailed us to say that even if you have an N95 mask, don’t get the kids to wear them because they don’t fit, and the kids will continue to breathe in toxic air,” Ngo said.

Ngo did thorough research into respiratory devices for kids available in countries that are known to suffer from air pollution on a daily basis, but none met his expectations.

“I bought all types of kids’ masks from around the world. Every one we evaluated either had a poor fit, was uncomfortable, or had questionable effectiveness. Many of the masks were fabric masks, which we know don’t do anything in terms of filtering PM2.5 particles,” he said.

Ngo tried dozens of solutions, none of which checked all the boxes. Either the quality of the data captured, or the speed of capturing it, or both, weren’t there. For this project, every half a millimeter would be crucial.

With an extensive background in AR/VR, Ngo knew exactly where to start the development of his own ultimate face mask for kids – 3D scanning.

“I found Indicate Technologies, who said they had a device from Artec 3D,” he said. “I called them on my day off and they said to come by.”

Given that the office of Artec 3D Gold Certified Partner Indicate California is a 15-minute drive from Kevin’s house, it wasn’t long before he met with the company’s 3D Product Expert Márcio Adamy. As Ngo recounted his project’s challenges and 3D scanner requirements (high speed, resolution, and accuracy), Adamy, also a parent whose family has been affected by air pollutants, knew all signs were pointing to using the Artec Eva. “We proved that Artec Eva would work for the kids’ face scan, and taught Kevin how to use the scanner and software, as well as some tips and tricks to do it as quickly as possible,” said Adamy. Since Ngo needed the scanner only for this project, he negotiated renting an Artec Eva on weekends.

A portable 3D scanner, Artec Eva uses white structured light, which is 100% safe for people, to create scans of medium-sized to large objects at speed and with an up to 0.1 mm accuracy and up to 0.2 mm resolution (in HD Mode).

Over the two weekends that followed, Ngo drove up and down the San Francisco Bay Area, scanning “every kid aged 5 to 11 [he] knew.” It was important to collect a spectrum of 3D data to account for the diversity of nose bridges and sizes, so kids of various ethnicities (Asian, Hispanic, African-American, and Caucasian) were scanned, while complete head scans would allow for the straps design that wouldn’t chafe delicate skin behind their ears.

Each head scan took less than 20 seconds and 30 seconds of post-scan clean-up. Despite his initial concerns, he didn’t have to buy a Windows laptop to run Artec Studio; for this task, his 2015 MacBook Pro with Boot Camp was sufficient for smooth scan processing.

“At one point, we had a line of like a dozen kids at my kids’ school. The beauty of Artec Studio is that I could do the clean-up after,” he said. “All I had to do was cut out the artifacts behind their heads. It was really easy to get rid of all of the noise.”

After processing in Artec Studio, each head scan was sent over to Pro Engineer CAD software. “We aligned each scan by the tip of the lips, and from there, found the optimal one-size-fits all shape. The scans helped us devise a shape that was 90% there. We then did a half dozen rounds of 3D printing and test fitting on kids, making small adjustments each time and progressively getting higher-resolution prototypes made,” Ngo said.

Next, Ngo and his team – three friends who are all experts in their own fields – needed to redefine the design.

“We did a PolyJet print to simulate what a potential silicone material would feel like, and that helped validate the shape that we had,” he said. Next, the team went to production tools. At the co-molding stage, liquid silicone rubber was bonded to plastic parts to emerge as one piece where the filter opening would be the sole place airborne particles could penetrate.

As a result, the Flo Mask’s soft gasket could perfectly contour a child’s face while keeping the mask from touching their lips. The adjustable straps were designed to clear the ears, and a rubber backing was added on the top strap to prevent it from slipping off the head.

Normally, a filter consists of fibers woven tightly together to prevent particles from passing through. Higher protection comes at the cost of reduced breathability.

“It didn’t seem like there was any filter in the world that would be breathable enough, but I finally found a medical company here in the U.S. that makes ventilator filters,” Ngo said.

Ventilator filters made of nonwoven fabric called Spunbond proved remarkably efficient at blocking out viruses, while maintaining a high volume of air flow.

“The manufacturing process of this is very different,” Ngo explained. “They’re not weaving the fibers, they’re actually poking holes into it. And that process creates an electrostatic charge, which is efficient at attracting harmful particulates and viruses.”

The Flo Mask’s disposable filters can last up to eight hours of continuous use. “In a smoke-filled environment, the filter will load more quickly, so you’ll want to replace it sooner,” Kevin explained. “If they’re just wearing the mask to the grocery store, then the filter will last multiple days. The rest of the mask can be washed with water and soap, and it dries within an hour.”

“I have yet to find a kid that our shape doesn’t fit perfectly,” Ngo said. “We scanned ages 5 to 11, and the shape we got was so good that we could actually expand that to ages 4 to 12. We went beyond our dreams.” At this point, toddlers as young as two have been able to benefit from these masks.

On weekends, Ngo often takes his kids out to parks where they spend hours playing football in their masks.

“They have no problem breathing or speaking when they’re running around with their friends,” he said, adding that Dr. James Cisco, co-founder of Burgess Pediatrics in Menlo Park, California, gave Flo Mask his endorsement after measuring Kevin’s 4-year-old daughter’s blood oxygen level while she was wearing her Flo Mask. The pediatrician was convinced once it read 100%.

“Flo Mask is raising the standard for kids’ masks. The unique silicone gasket, filtration efficiency, and ability to be washed is unlike anything I’ve seen,” Dr. Cisco said.

After two years and dozens of prototypes later, the Flo Mask officially launched in December 2020. To date, there are over 2,000 children across the US wearing Flo Masks, with many parents raving about their children’s love for the mask on Amazon, where it boasts a 4.5 star average customer rating.

“With the current pandemic, masks are needed now more than ever,” Ngo said. “As the world begins to re-open, with kids returning to school or traveling again, people may notice a very iconic-looking mask. I’ve yet to see a solution that has nailed the fit as we have, which is a huge testament to how amazing Artec 3D equipment is.” 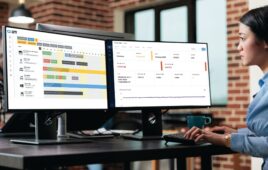